Eastern Reef Egrets are exclusively coastal and are relatively common on rocky shores around much of the Australian coast line and some off shore islands. In Victoria they are relatively rare and are most often found near Mallacoota with a few sightings to the west towards Cape Conran.  West of Conran there are very few records. There are grey and white morphs however whites are more common in the north and rare in Victoria where we see mainly greys.

I have been fortunate to observe Eastern Reef Egrets hunting fish on rocky shores on a number of occasions. They stalk with a crouched posture often with their wings partly spread, however their intense concentration and focus makes an especially strong impression on the observer. The long neck is usually contracted when hunting and is used for lightening fast lunges to catch fish with their long heavy bill which, while dagger like, is used like fine pointed tweezers to take hold of prey rather than as a spear to impale (1). While the overall posture shows the concentration I think it is the unblinking yellow eyes with the dark iris that give the greatest impression of concentrated focus.

The following selection of photos shows one bird hunting for tiny fish (I have seen them catch much larger fish that they can barely swallow) and while each fish may have been small, the good number it was catching and consuming more than made up for the small size (2). The bird was so engrossed in fishing that it tolerated my slow and careful close approach. I spent just over 15 minutes observing and photographing the bird and eventually left it still fishing.

I approached the Reef Egret slowly stopping frequently to allow it to adjust to my presence and using some rocks as partial cover. 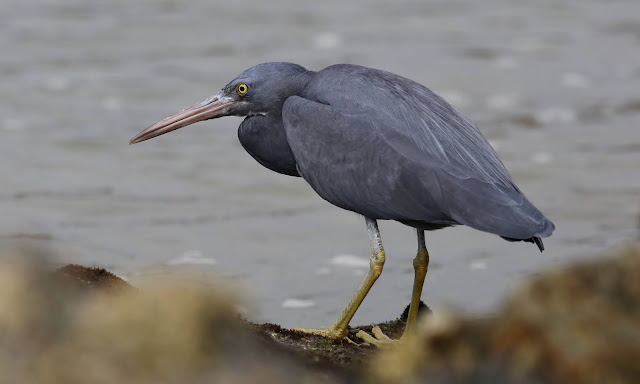 The Egret was not too concerned by my presence and resumed hunting for fish. 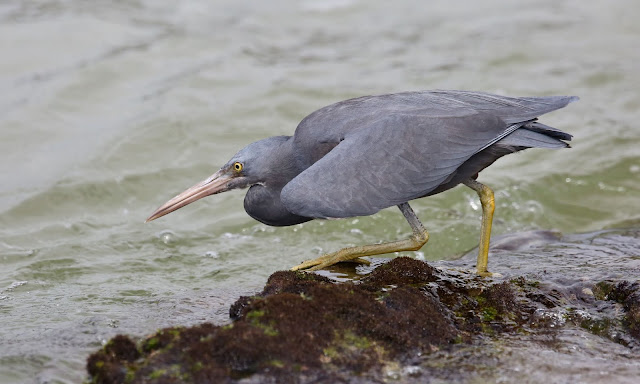 Note in this photo and the one above the low crouched posture and partly spread wings. I assume the low position makes it harder for the fish to see the Egret. 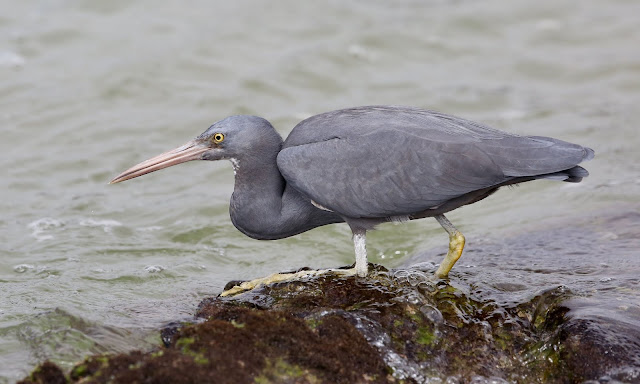 The Egret made lightning fast lunges which were so fast it was hard to capture with the camera. 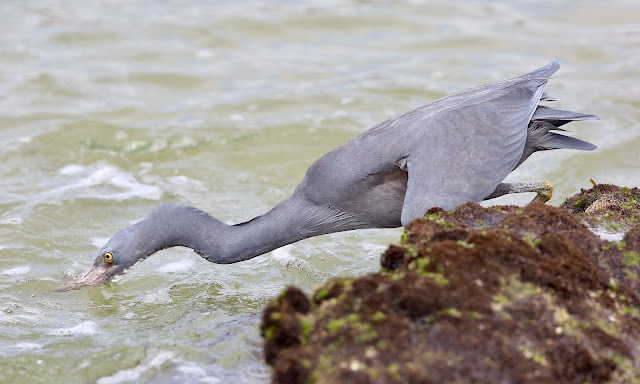 Most times this master hunter came up with a fish. 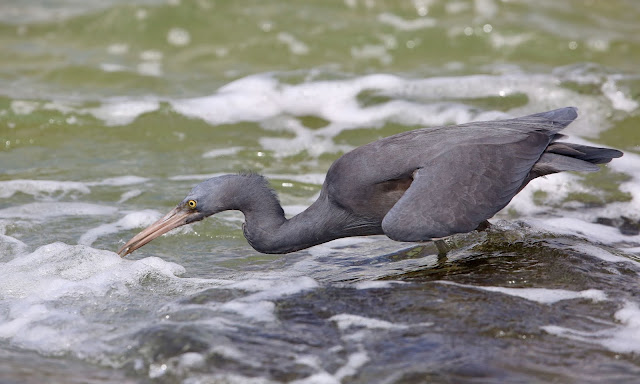 The fish were tiny but the Egret made up for this with quantity. 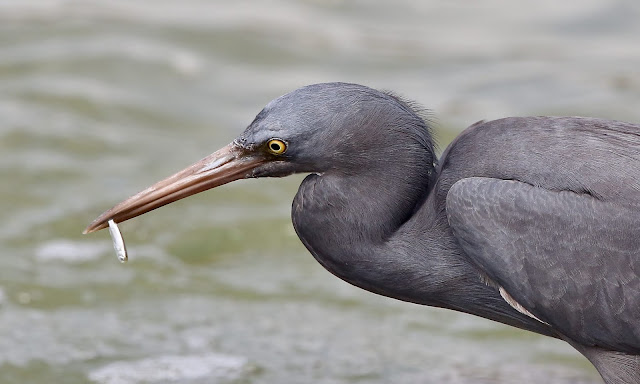 The small fish were quickly swallowed. Note the nictitating third eye lid is visible – this is an automatic reflex action to protect the eyes. 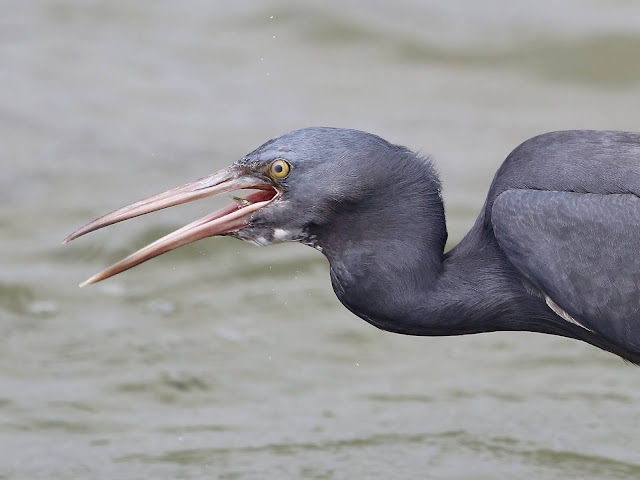 Note the forward facing eyes in this photo which are required to provide accurate vision for capture of small prey below the water’s surface. The surging water and moving fish make for difficult conditions however this fishing master made catching tiny fish look easy. 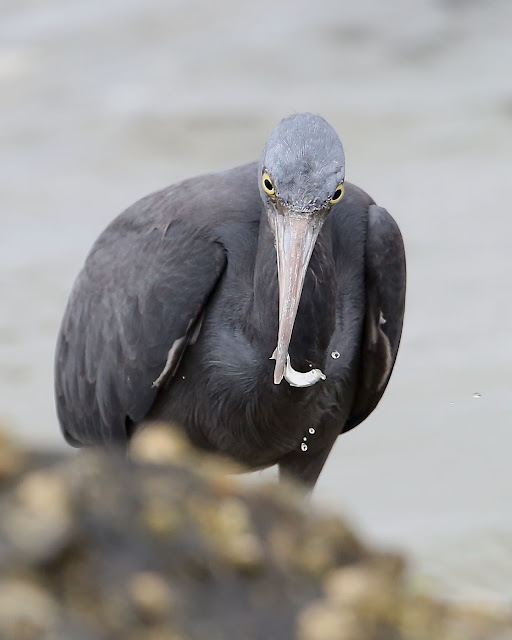 The bird had to keep an eye on the incoming waves to avoid being submerged and washed off the rocks. 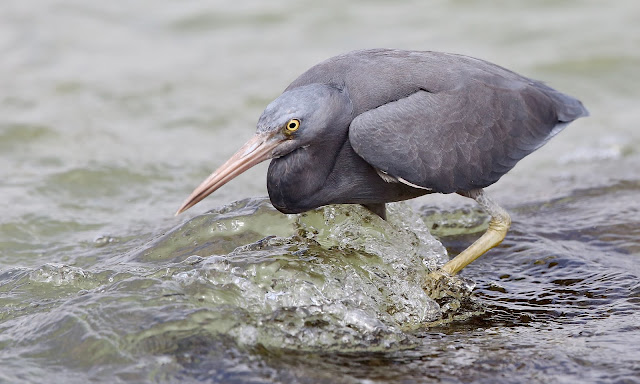 Holding onto slippery rocks is helped by large feet with sharp claws and when required a wing was thrown out to help maintain balance. 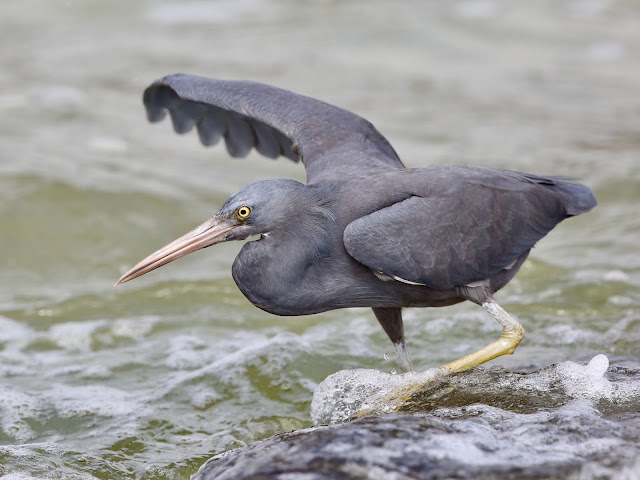 Now and again the bird took a short break from the intense crouched hunting position. 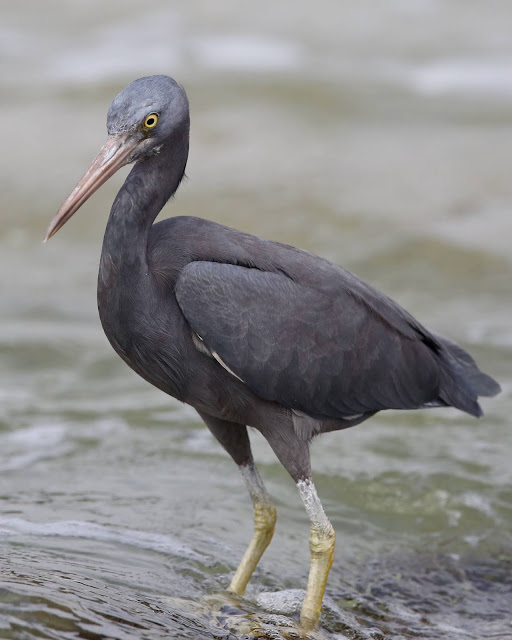 This is an adult non breeding bird – there are no short nap plumes though there are some plumes on the back. 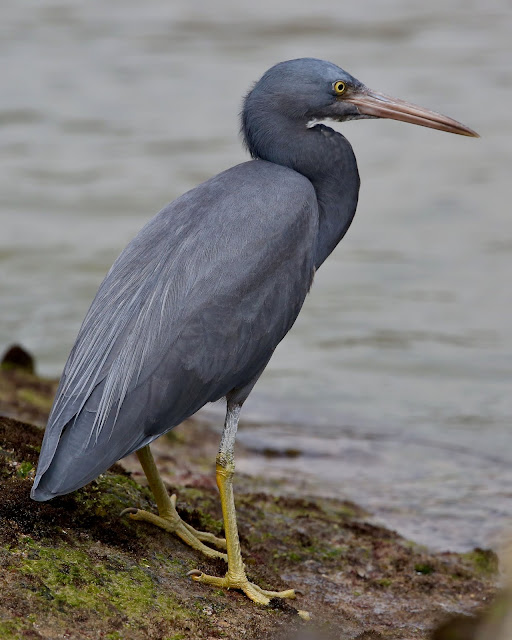 Note the long neck and white throat patch which is very small or absent in juveniles. 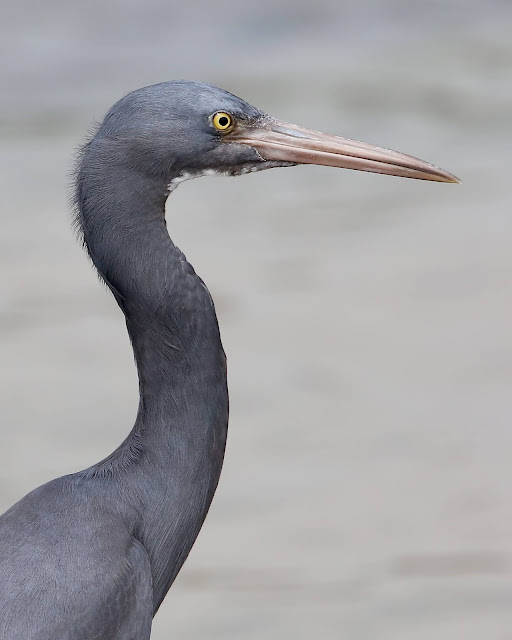 Shortly after this photo I slowly backed away – the bird continued fishing – no doubt the incoming tide and presence of fish presented an opportunity too good to leave. 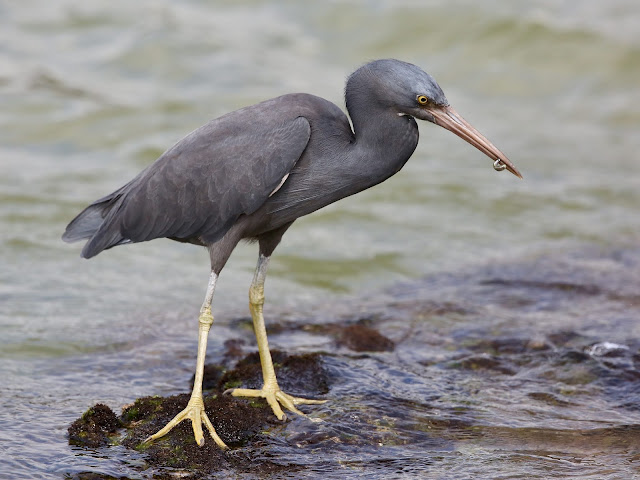 (1) Note: While I have not seen fish speared by Reef Egrets it is likely they do this with larger fish. Darters are an example of a sharp billed fish hunter that spears fish.

(2) The photos were taken in August 2020 on a rocky headland on the north side of the Brunswick River entrance, NSW.