When we first moved to our rural property in East Gippsland in 1976 there were no Bell Birds. We now have a colony that has been here for about 15 years. A long-time local told me that there used to be Bell Birds on the river for many years however they were either wiped out or moved during the disastrous 1965 fires. It took 35 years for a new colony to establish after the fires. The new colony has increased in size over the past 15 years and while the area they occupy has expanded, the location has not changed even though there is plenty of suitable habitat along the river.

The Bell Miner (Manorina melannophrys) is a honeyeater. The Manorina genus includes three other species, the Noisy, Yellow-throated and Black-eared Miners. Like their cousins Bell Miners are colonial birds and aggressively defend territory however the Bell Miner is unique in that each colony occupies a relatively small well defined area where it feeds more or less exclusively on sugar produced by sap sucking insects called psyllids. The white crystalline structures produced by the psyllids are known as lerp.

Bell Miners are well known birds in southeast Australia from Melbourne in the south to around Gympie in SE Queensland in the north. They are generally confined to the east side of the Dividing Range. Their loud bell like calls are distinctive and easily recognised however seeing the birds, even with binoculars, can be difficult even when there are large numbers calling close by. Their olive-green-yellow plumage blends in well with the eucalypt canopies they occupy.

Much has been written about Bell Miners so I will not include more details in this post but instead refer you the the following excellent blog posts:

The Following photos were taken during three sessions over the past couple of days.

The chorus of bell calls generated by a large Bell Miner colony can be hard on the ears at times - a good thing this colony is some distance from our house.

Posted by Avithera at 16:25 No comments:

We have been fortunate to have a resident male Satin Bowerbird (Ptilonorhynchus(1) violaceus violaceus), including a bower, the male’s courtship display arena, continuously in our garden for about 10 years now.

Over the 10 years there have been at least six bowers that we know of, each constructed and decorated in a separate location with only one bower in the garden at a time. So it seems only one dominant male at a time is in charge of our garden.

As the males only reach the fully blue mature stage at age 7 and probably only live on average to about age 10 or 11 years, we have no doubt had a number of dominant blue males over the 10 years.

Each bower is dismantled as the new bower is constructed and the precious blue objects are moved to the new location.

Male bower birds are great thieves so the blue objects are continually changing at a bower as some items are stolen and new ones turn up - some of these stolen and some newly found. The objects include blue plastics of various origins, however blue bottle tops and straws are common and Crimson Rosella blue tail feathers are also common. A few yellow objects are included, often flowers, but sometimes we have found Sulphur-crested Cockatoo crest feathers at bowers in our garden.

The number of blue objects at the new bower is less than are seen in the photo above of the old bower so I am assuming some have been taken/stolen by other males.

The blue objects match the colour of the mature male’s plumage, though, depending on the amount and angle of the light, the plumage can vary from blue to black. The blue objects also match the vivid blue eyes of the females and immature males. The mature fully blue males have lilac coloured eyes (see photos).

While the activity at the bower is at a peak during the breeding season the bower is maintained throughout the year. The bower in this post was moved to this location over the past couple of weeks and is still being refined with new sticks added and sticks in place adjusted and painted. Even though it is autumn and the breeding season is over there is still plenty of display activity at the bower as the photos in this post show.

I was surprised to observe an immature male at the bower busily adding and adjusting sticks and painting the inside of the bower. The immature male also displayed and danced around the bower with blue objects held in its bill while another immature male looked on. The mature blue male was not present. 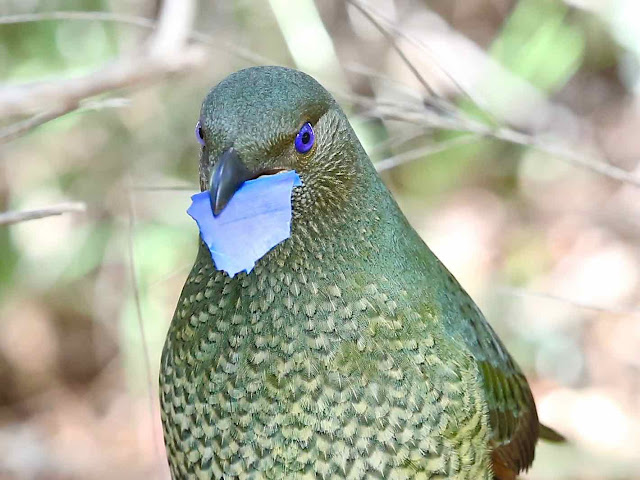 In an observation session a couple of hours later when the adult blue male was present, two immature males were also at the bower. One of the immature males stood motionless inside the bower, as a female would, while the mature male commanded the display area and put on a performance with dance, a variety of calls and blue objects held in its bill.

It would seem that young males practise bower construction at a mature male’s bower and also learn to display in preparation for the day when they reach maturity and build their own bower. The mature male in command of the bower, the owner, seemed to tolerate the presence of the immature males. I suspect this may not be the case during the breeding season when receptive females are visiting bowers.

The Satin Bowerbird and other species of this genus have a small patch of feathers extending from the forehead down over the root of the bill which gives the head and bill when viewed from some angles a rather unique shape – see photos.

Australia is fortunate to have 8 species of bowerbirds with 5 species in the Ptilonorhynchus genus. This list of Bowerbird species is copied from the BirdLife Australia working list:

A post featuring the Western Bowerbird can be found here:
http://avithera.blogspot.com.au/2015/07/olive-pink-botanic-gardens-alice-springs.htmlewed

For more information about Satin Bowerbirds the following sites are well worth a look: