The East MacDonnell Ranges, as the name implies, lie to the east of Alice Springs and while less well known than the popular West Macs, are well worth a visit.
We based ourselves at the Ross River Resort campground located about 90km east of Alice Springs. From there we were able to access Trephina Gorge, N’Dhala Gorge and Ruby Gap Nature Parks and the Arltunga Historic Reserve.
The ranges are geologically complex, scenic and interesting and support a diverse range of habitats and plant communities. In addition to natural history there is human history, including petroglyphs (rock engravings possibly ranging in age from 10,000 to 2,000 years old) and mining history at Arltunga (gold) and Ruby Gap (gem stones). The historic Ross River Station homestead building is well worth checking out.
Ghost Gums (Corymbia aparrerinja) are an outstanding feature in the MacDonnell Ranges landscape. This particular gum at Trephina Gorge Nature Park is the largest known specimen in Australia and is measured at 33 metres high with an estimated age of 300 years. This tree is listed in the Northern Territory Register of Significant Trees and is registered in the National Register of Big Trees.
Rainfall in this very arid part of the driest continent on earth is highly unpredictable and when a whole years rain falls in a day or two the results can be spectacular. The flood debris high in this Red Gum in the bed of Trephina Creek shows just how spectacular these rare events can be.
Conditions were generally good with many shrubs in flower however it was dry and birds were scarce away from the watercourses and gorges. We saw White-backed Swallows hunting along side Little Woodswallows in Trephina Gorge and also just above the gorge Black-faced Woodswallows.
In addition to the ever present White-plumed Honeyeaters we also saw Grey-headed and Brown plus Singing and Spiny-cheeked. There were lots of Mistletoebirds and mistletoe, especially in the acacias. Apart from a few Nankeen Kestrels and Brown Falcons no other raptors, apex predators, were sighted which confirmed the general low number of birds in the area.
Other bird species seen included Willie Wagtail, Magpie-lark, Pied Butcherbird, Weebill, Chestnut-rumped Thornbill, Hooded Robin and Splendid Fairy-wren.
The highlight bird species was a small flock of Spinifex Pigeons (Geophaps plumifera) we came across on the drive out to remote Ruby Gap. For me these birds are endearing, almost comical, with their rakish tall sandy crests and dumpy bodies. They are perfectly coloured to match the red rocky, grassy, spinifiex dominated terrain where they are so often found. The group was beside the track in rough acacia scrub on rocky ground with a grassy understory. No doubt they were feeding on grass and wattle seeds.
Most of the flock moved away into the scrub but a few lingered on rocks to see what the vehicle with the camera lens poking out of the driver’s window was doing, and they luckily stayed, posing nicely for some photos.
While eating lunch in one of the two Trephina Gorge camp grounds on the banks of Trephina Creek below Trephina Bluff (see first photo above) we were entertained by two adult and one juvenile Pied Butcherbirds that came in to do the rounds of the camp ground scrounging any food left by the campers. They were very bold and are clearly used to people - plus they knew the camp routine well.
A couple had just set off for a walk from their campsite when we pulled in and the Butcherbirds arrived soon after. They picked up a good number of scraps in and around the camp and especially near the camp table. When they finished that site they moved on to the next. They also hung around us, no doubt hoping we might feed them a few morsels from our lunch.
From Ross River we headed back to Alice for a couple of days to get ready for a week out at Newhaven.
Posted by Avithera at 09:53 No comments:

Olive Pink Botanic Gardens (OPBG) is a must visit location in Alice for birders and anyone interested in inland native plants – see this link: http://opbg.com.au/history/
The gardens are an especially good place to reliably see Western Bowerbirds and possibly Grey-crowned Babblers. We found both species and had a very enjoyable time late one afternoon observing and photographing both at close range.
First, some photos of a pair of Western Bowerbirds at a bower.
While watching them, the male first spent time collecting small sticks and leaves to build up the area around the actual bower. The large mound of sticks helps support the larger bower sticks in an upright position, it would be impossible for the bird to fix the bower sticks in the hard ground. The mound also provides an area on which the male displays to the female while she stands inside the bower and for the placement of collected objects. 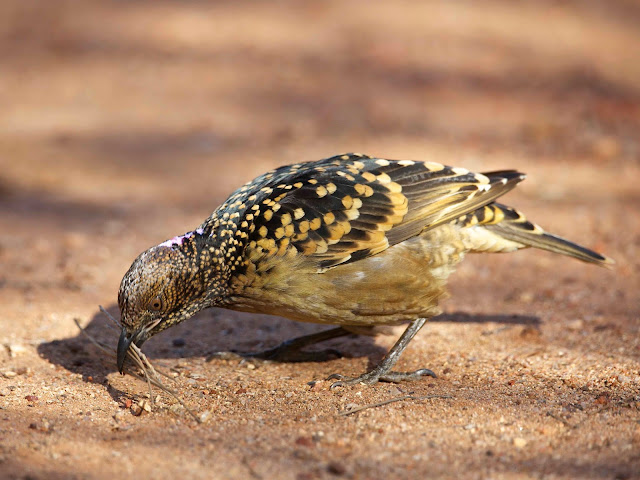 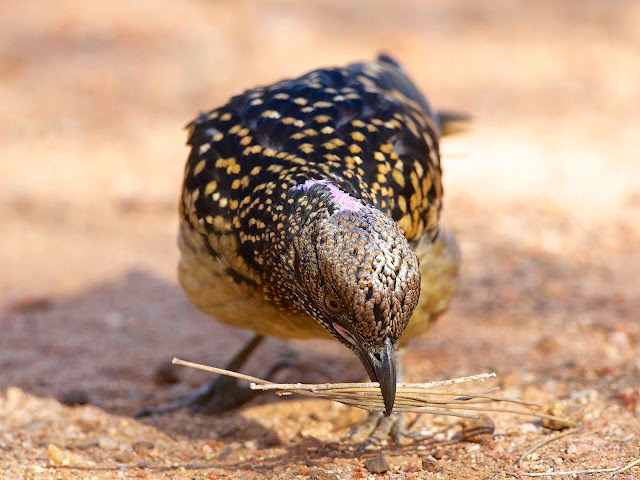 He soon left off stick collecting and commenced a protracted display with the female standing inside the bower. This was punctuated by brief sessions of feeding by both birds near the bower.
The following photos show the male displaying, which entails a range of moves including harsh calls now and again and picking up food matter and a green Quandong (Santalum acuminatum) fruit while the female is standing in the bower to the right. 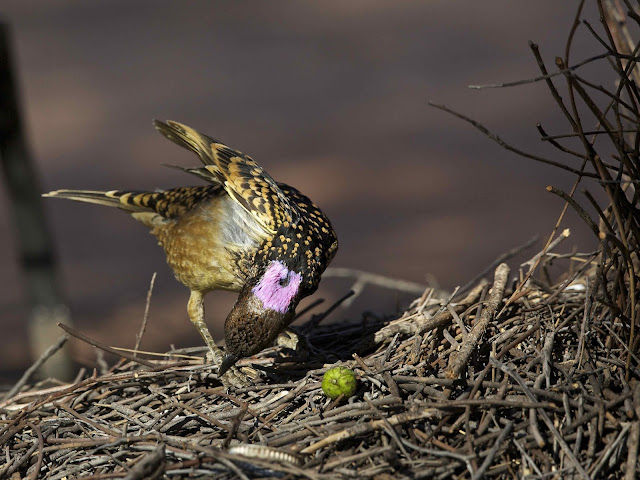 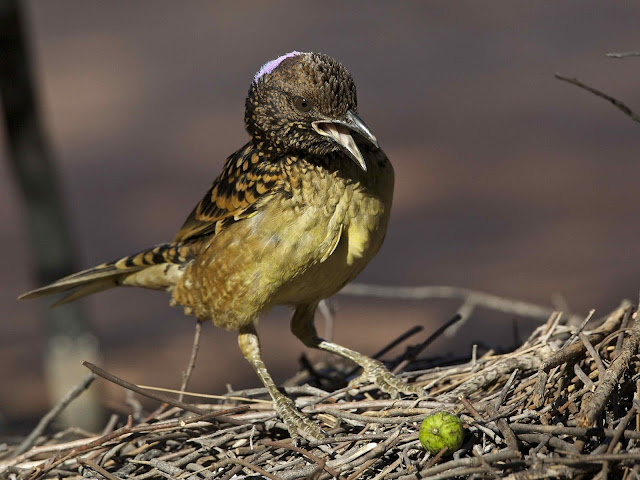 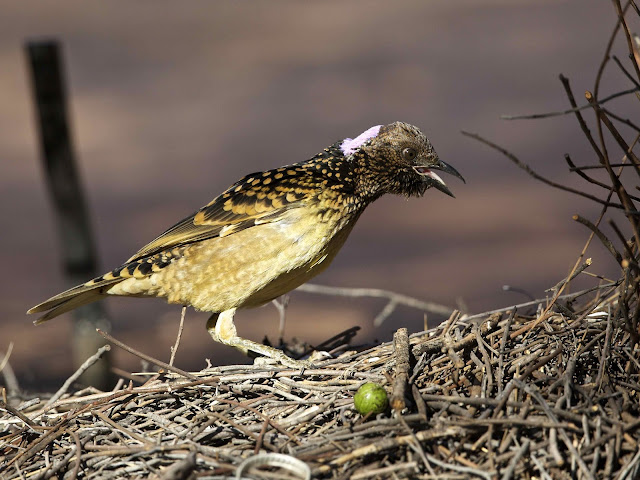 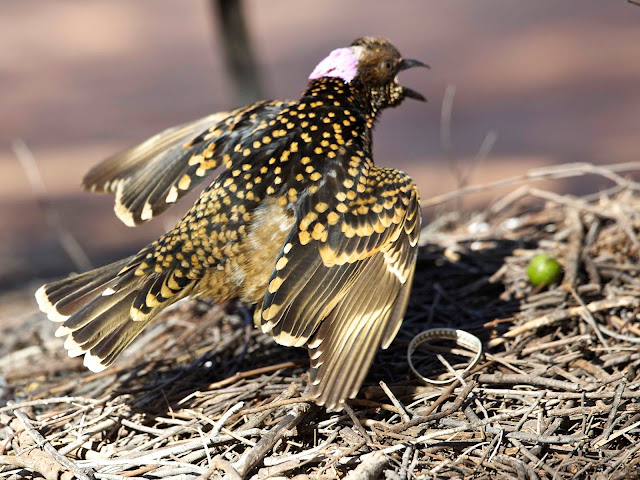 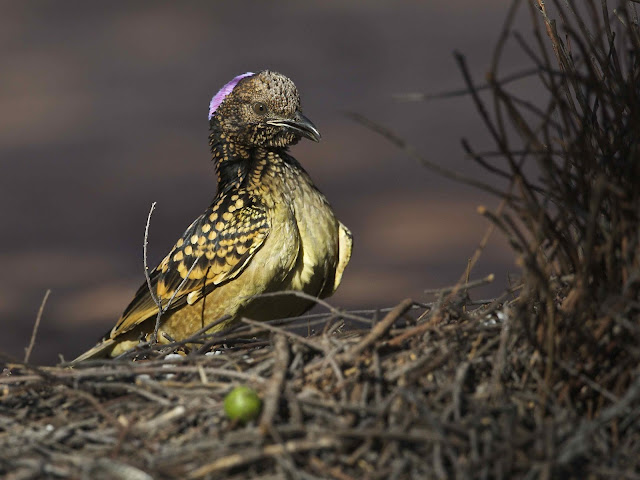 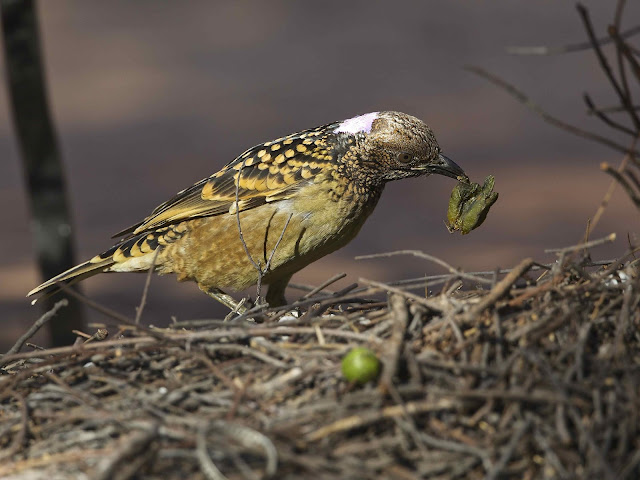 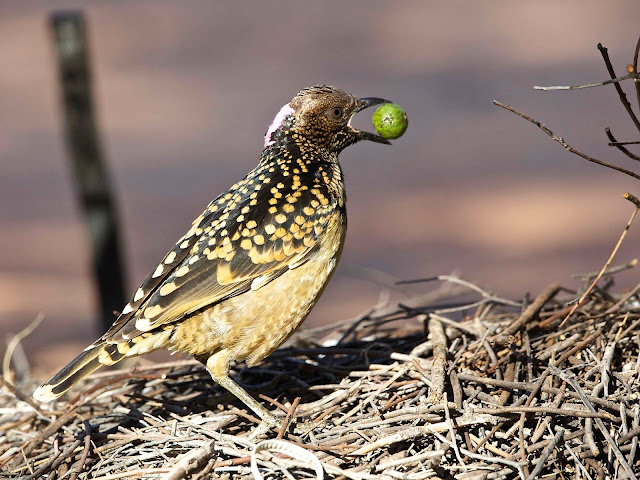 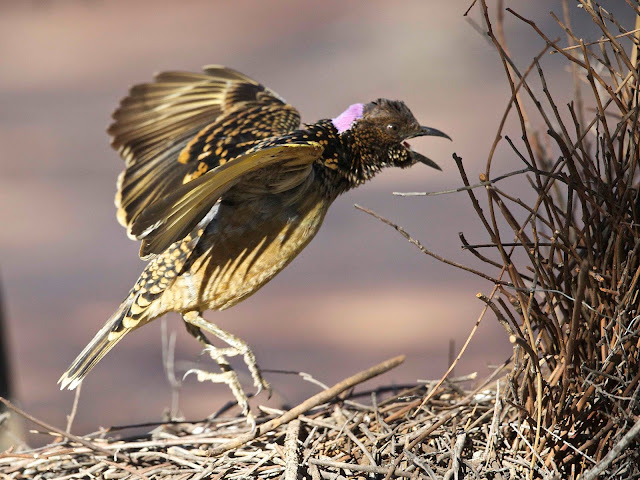 We also crossed paths several times in the gardens with a small band of Grey-crowned Babblers. They are very social birds, like Choughs and Apostlebirds. 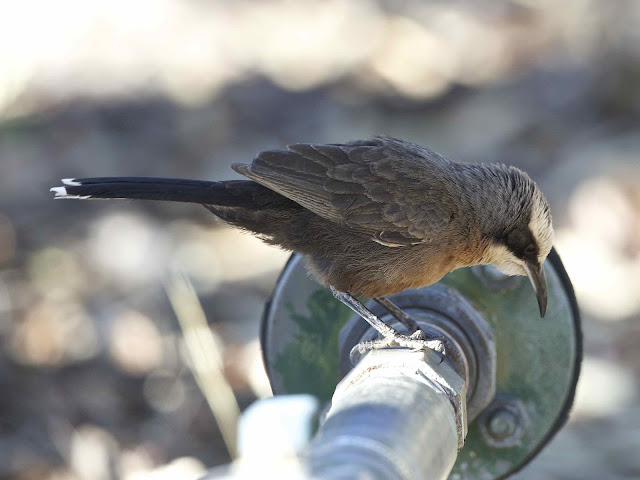 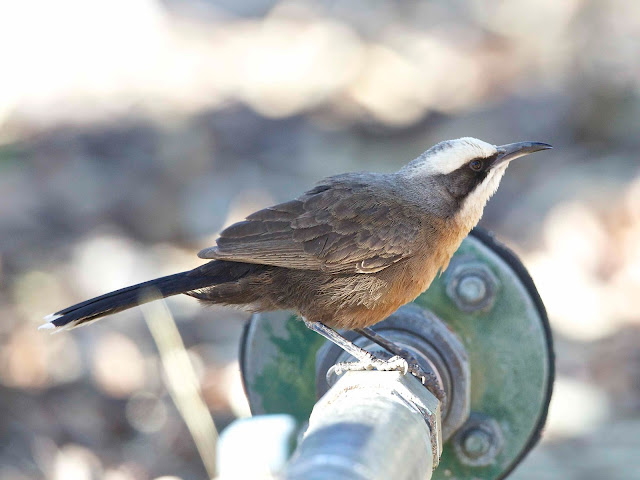 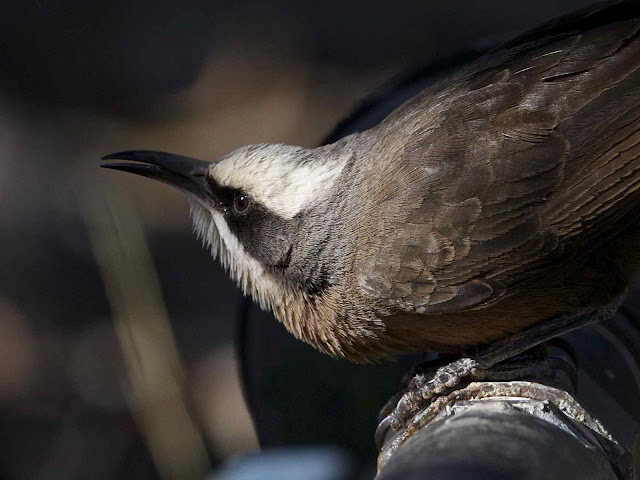 Finding birds in settings such as the OPBG’s or around camp and picnic grounds is often good for both bird observation and photos as the birds do not see humans as a threat and their FID (flight initiation distance) is accordingly much shorter than for locations where humans are uncommon. On the other hand the birds’ behavior may be somewhat unnatural in these settings.
Posted by Avithera at 10:43 No comments:

From Eyre Creek we travelled north on the Eyre Development Road through Bedourie, stopping for fuel but not staying for the camel and pig races. Next stop was Boulia where we took on food and fuel for the trip west via the Plenty Highway to Alice Springs.
For the first 250 km of the trip to the Qld/NT border, the road is called the Donohue Highway and then in NT the next 500 kms to the Stuart Highway is called the Plenty Highway. For the 750km crossing there are sections of sealed road but mostly it is gravel of various types and condition, ranging from good to not so good but nothing really ugly. The Plenty joins the Stuart Highway 70 kms north of Alice Springs.
The journey takes you through relatively flat cattle country most of the way with some attractive rocky ranges towards the western end, outliers of the MacDonnell Ranges. While recent summer rains had generated some grass growth, the grass by mid July was now dead and the soil, water holes and creeks were dry.
We took two and a half days for this crossing with two overnight bush camps. Fuel, basic food supplies and some camping is available at cattle stations and Aboriginal communities along the way. We elected to be self-sufficient and took all our own food and fuel. It pays to take reserves of fuel, food and water in case of unexpected delays rather than rely on fuel supplies from stations – we have found in the past that fuel is not always available as advertised.
Travelling west from Boulia in Channel Country, the main river crossed is the Georgina which eventually discharges via other rivers to Lake Eyre. Further west the rivers such as the Hay and Plenty drain south into the Simpson Desert, the largest sand ridge desert in the world.
The Plenty Highway runs east west roughly along a divide between the Barkly Tableland to the north and the Simpson Desert to the south.

The road passes through mostly Mitchell grassland however there are a few sections of spinifex country with large termite mounds built by termites that specialize in consuming spinifex.


Our second and last camp on the Plenty was at the start of the now closed Cattlewater Pass track in a designated fossicking area. I have no idea what people were fossicking for there however the area coincided with a mature and very attractive Gidgee woodland where we found Singing, White-plumed and Spiny-cheeked Honeyeaters, Rufous Whistlers, Chestnut-rumped Thornbill, Red-capped and Hooded Robins.
We have encountered Hooded Robins in good numbers in most places we have stopped from Sturt NP to Alice Springs. This species is now declining in Victoria where it was once more numerous and widespread. It does seem to be very well adapted to arid inland Australia.
Hooded Robins have the same hunting technique as many other robins that take prey on the ground. From a perch they look intently this way and that until they spy a suitable food item and then dive down and capture the food. Then they fly up, usually to another nearby perch, and resume the process over again.
From the Cattlewater Pass Track camp we soon found ourselves on the Stuart Highway with at first no speed limit and then a 110km/hour limit. Our maximum speed on the dirt roads was around 80 km/hr and our average below 70 km/hr, so even 100 km/hr seemed fast.
We travelled south crossing the Tropic of Capricorn again. Arriving in bustling Alice Springs was a minor shock to the system after a couple of weeks of remote dirt roads with few vehicles and very small outback towns with very few people. We have been to Alice several times since our first visit in 1975 – there have been many changes since then, both to Alice and ourselves, including our mode of travel which was very basic back then and fairly high tech now.
Posted by Avithera at 10:10 No comments: