APO’s are far more common than Sooties with the estimated Australian populations of the species respectively of 10,000 and 4,000 birds (1). Both APO’s and Sooties are found right around the Australian coast including Tasmania, however, APO’s are mostly a bird of sandy and muddy habitats while Sooties prefer rocky coastal areas. While this is generally the case it is not strictly so with both species being found in the other’s habitat at times, sometimes together. The different habitat preferences and associated foods probably helps explain the population differences, with more habitat and food resources open to the more generalist APO’s.

On a recent trip to the south coast of NSW we found pairs of Sooty Oystercatchers at many of the rocky habitats we visited. I caught up with a pair resting on rocks at the Bastion Point Mallacoota Boat Ramp.

There are two sub-species of Sooty Oystercatcher in Australia (2):

The northern Sooty has a large yellow orbital ring while the southern’s ring is small and red. Hybrids are possible where the two sub-species overlap.

(1)  Population estimates taken from Shorebirds of Australia by Gerring, Agnew and Harding, 2008 edition.


(2)  From BirdLife Australia Working List V2.
Posted by Avithera at 13:33 No comments:

Bherwerre Beach forms the southern coastal boundary of Booderee National Park NSW at the park’s western end. The beach has a very slight curve over its 7 kilometre length and for a surf beach it shelves gently, exposing larger than usual areas of sand at low tide.

When we arrived at the eastern end of the beach, eight Australian Pied Oystercatchers (Haematopus longirostris) were immediately obvious as they probed the sand for food at low tide. Among the APO’s three small shorebirds grabbed my attention, however they were just too far away to be identified, so I started walking along the beach towards them.

No flags were seen until the last bird which I noticed was walking with a pronounced limp. The photos revealed this was APO EX and the flagged leg was missing a foot. 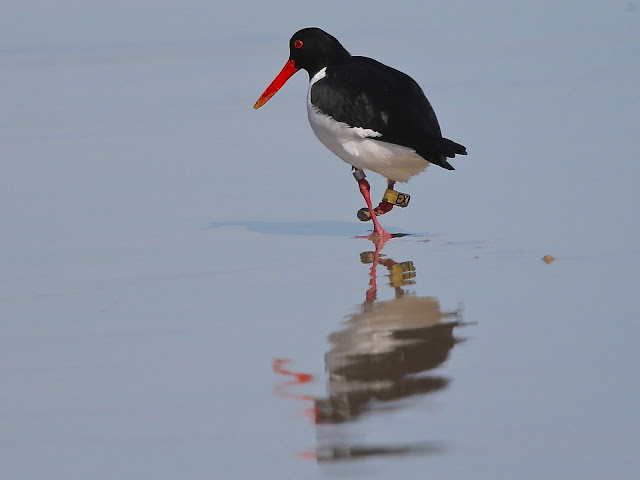 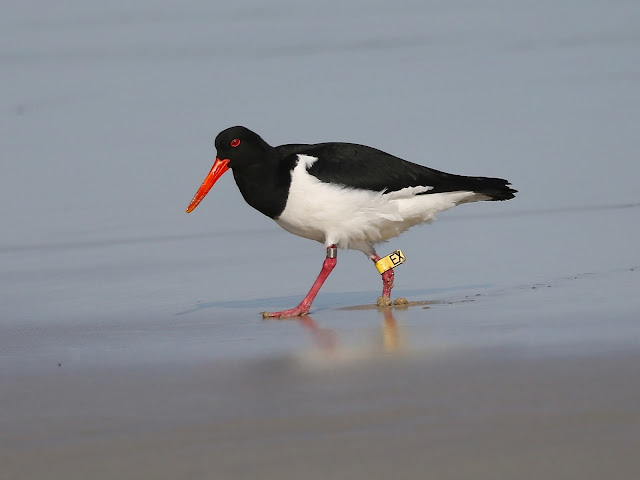 The impaired leg was not stopping EX from foraging. 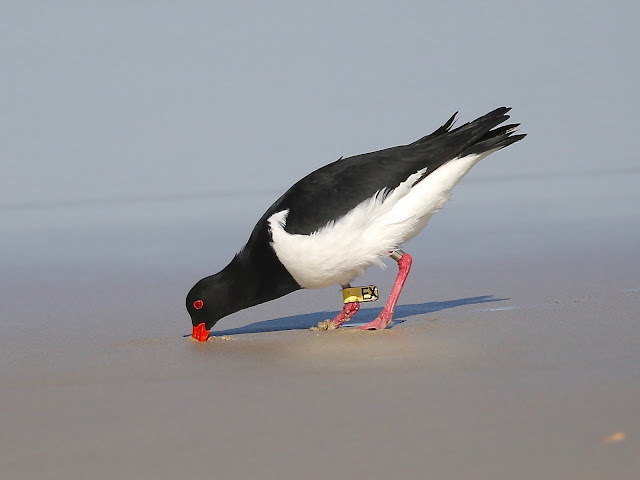 EX looked healthy and plump enough and could stand briefly on the stump of the leg. 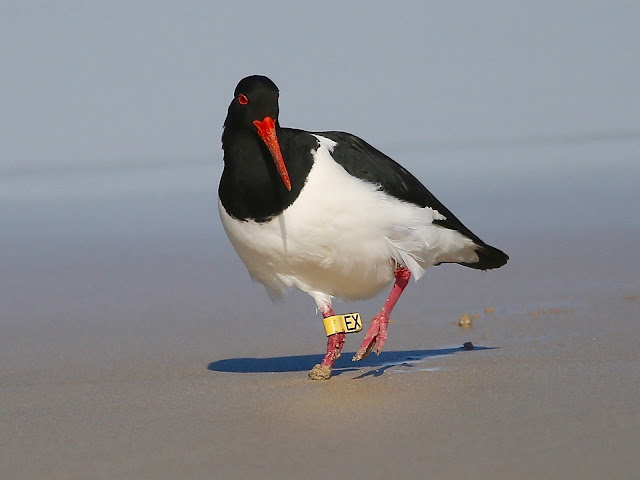 By whatever means EX lost the foot, I suspect discarded fishing line would be a strong contender for this injury, I can imagine it would have been a painful time while it healed and reached the point where it could bear weight.

APO EX was reported to the Australasian Wader Studies Group.

AWSG advised APO EX was banded and flagged on 24/04/2012 at age 2 on Roussac’s Farm near Foster, Corner Inlet. The bird was missing its right foot when banded so it has survived without a foot for over 5 years since then. APO’s are tough and resourceful birds able to exploit several habitat types, even grassy paddocks and golf courses, which together with their size and confident natures helps explain their success as a species.

Masked Lapwings (Vanellus miles) are familiar to many people as they are “large, conspicuous, noisy and often aggressive plovers” (a good description taken from Morcombe). Again, from Morcombe, “they are bold enough to claim suburban parks and gardens as territory”. They are noisy in the early part of the breeding season and will aggressively defend their nests and young by diving at intruders and may strike with their wing spurs.

It was initially thought there were two separate species with the southern birds called Spur-winged Plovers and the northern called Masked Lapwings. However when it was decided there was only one species, the name Spur-winged Plover was ditched in favour of Masked Lapwing. Both the Southern and the Northern sub species have wing spurs.


I recently found a Southern Masked Lapwing bathing and then preening so I took the somewhat rare opportunity to capture some photos. 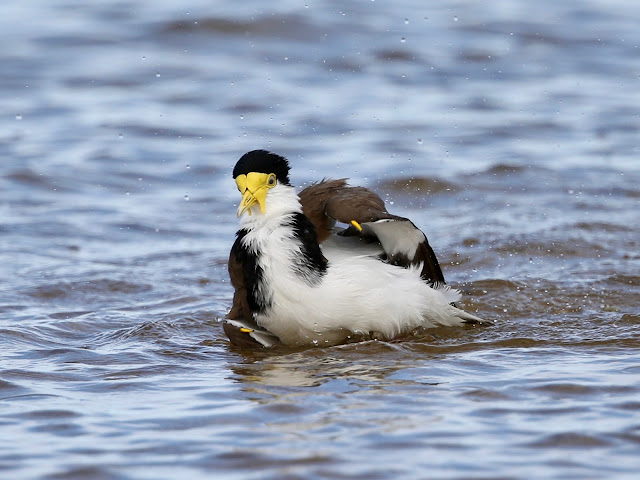 Posted by Avithera at 12:22 No comments: