The Australian Owlet-nightjar is a common and widespread bird across much of Australia and Tasmania where habitat is suitable but it is rarely encountered due to its nocturnal lifestyle. When it is seen, more often than not the bird is found peering from tree hollows where it roosts by day, especially on sunny winter’s days when they will sun themselves at the hollow entrance to soak up warmth. Much less often the bird is flushed and then if you are lucky it may be seen perched out in the open.

Recently one of our Birds on Farms survey group members flushed an Owlet-nightjar at the historic Strathfieldsaye Estate on Lake Wellington near the Perry River. I was lucky to be in the small group surveying a 2 hectare woodland block where the bird was flushed and even luckier to get to the site where the bird perched briefly and take a few photos before it flew.

This beautiful little owl-like nocturnal bird, (1)  with huge eyes, distinctive head markings and whiskers, has loads of charm. Photos posted on BirdLife East Gippsland’s Facebook page set a record for me for the most likes and shares which I think is testament to the wow factor of this bird. 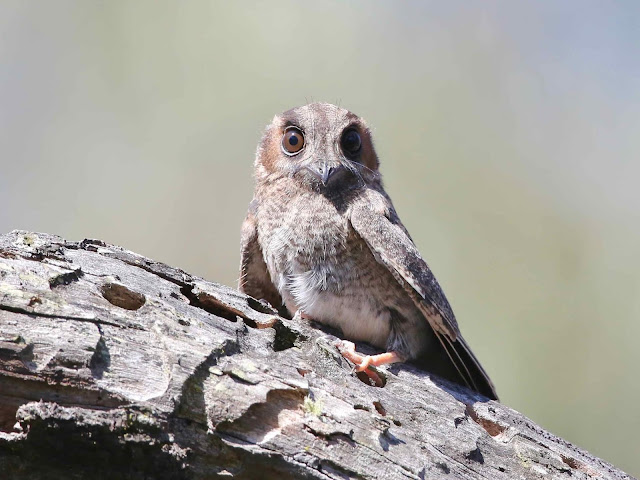 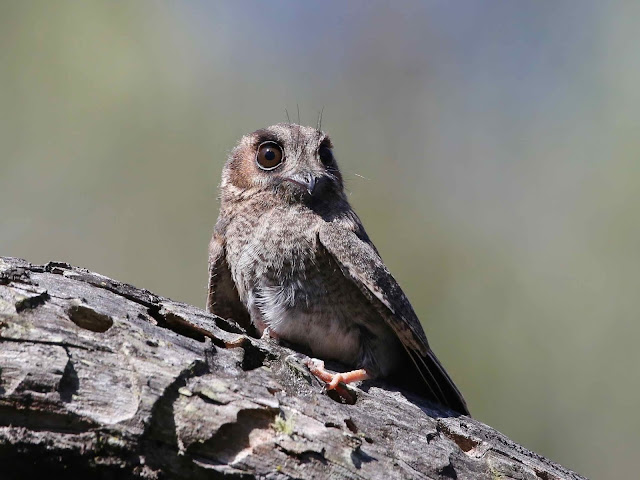 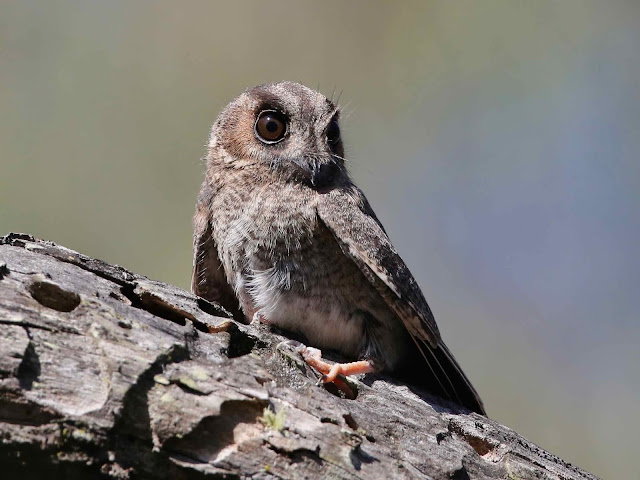 Note: (1) After Frogmouths, Owlet Nightjars are most closely related to Swifts – their taxonomic relationship with owls is distant.

Posted by Avithera at 16:32 No comments:

Juvenile Pelican on a rampage

As part of a study of the Crescent Island Pelican rookery, (1), eighteen juvenile Pelicans from the Eastern rookery have been fitted with a metal band on the right leg and a red plastic band with white numbers on the left leg. The bands are required to track individual young birds to see where they disperse to and how long they live.

In addition, blood and DNA samples were taken from the juveniles when in hand for banding to assess the health of the birds and their genetic relationship with the broader Pelican population across the Gippsland Lakes and beyond.


The juveniles with bands are being tracked as they disperse from the rookery (they are no longer using the rookery) to see how they disperse and to monitor their survival as they learn to fend for themselves and become less reliant on their parents feeding them over time.

Thus, over the past few weeks we have been looking for the juveniles with bands and using photos to identify and record the band numbers of individual birds. So far on each weekly monitoring trip we have been able to find 9 of the banded young birds which have not ranged much further than 1 to 2 kilometres from the rookery. The young birds are all capable fliers and some may have dispersed much further across the Gippsland Lakes by now. The juveniles are still being fed occasionally by their parents.

Reports of banded Pelicans would be appreciated at any time. Please send to Deb Sullivan via email: deb.sullivan@birdlife.org.au  (2)

To photograph banded juveniles, they must be found standing out of the water so the bands are visible. The birds regularly rest on sandy beaches and spits however on approach the wary birds will often launch into the water. Some birds will be sitting, often asleep, so we must wait for them to stand up to reveal if they have bands and give us an opportunity to capture a photo record. A long telephoto lens is needed so band details can be captured at a distance – too close and the birds enter the water or fly off.

While photographing banded juveniles recently a few of the juveniles were sleeping among a group of young and some adult birds.

The young bird charged at the others with wings held open and wide and the bill open. At first I wondered what this behaviour meant. It was reminiscent of how the juveniles behave after a prolonged feed with their bill deep in their parent’s throat. Oxygen deprivation is thought to explain the seemingly drunken behaviour which I have covered in an earlier post here: http://avithera.blogspot.com/2018/01/australian-pelican-juveniles-strange.html

It soon became apparent the young bird was hungry and looking for a feed. There were some adult birds present however it is unlikely that any of these were its parents – they certainly were not offering a feed. The young bird did charge at one adult bird in particular, a small female which may have been its parent, however it also charged at juvenile birds. By charging and harassing the other juvenile birds it might have hoped to get them to regurgitate some food, though this is only speculation as I have not seen this happen before.

The following photos show the young bird as it charged at the other Pelicans, both adults and juveniles. 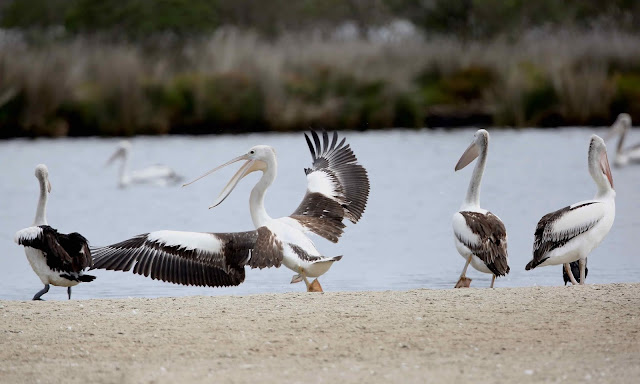 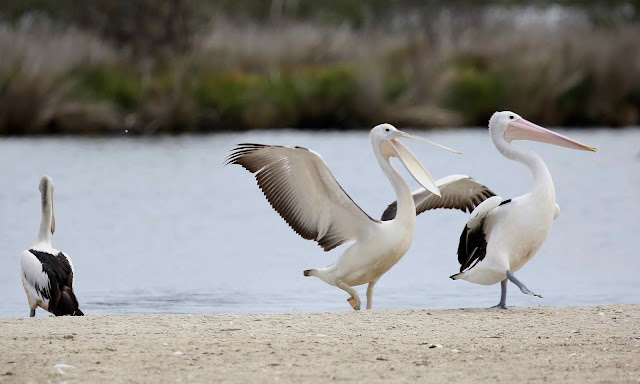 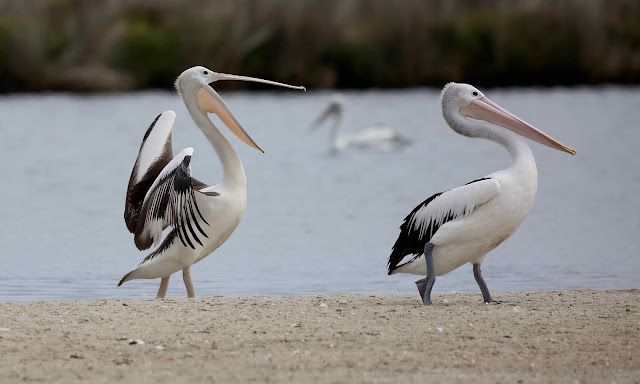 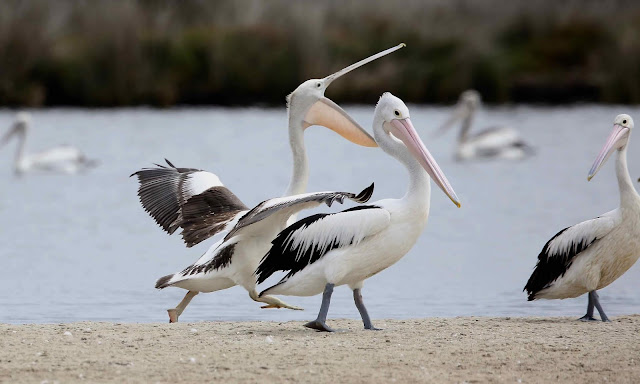 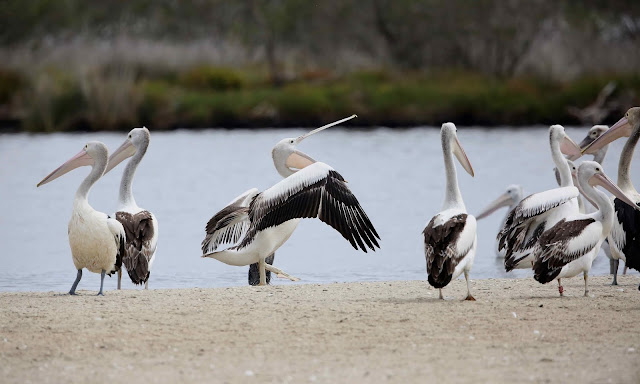 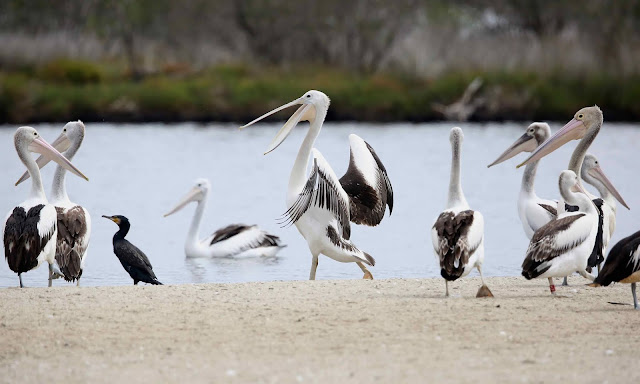 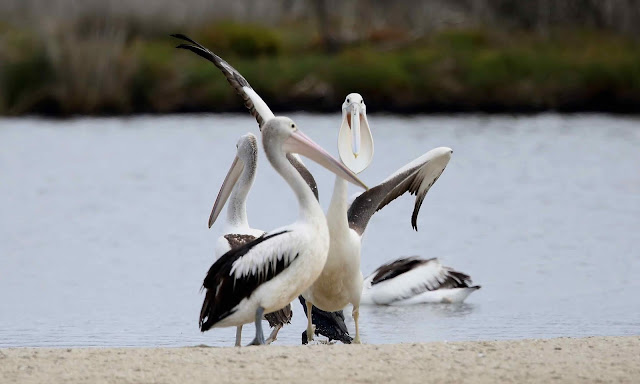 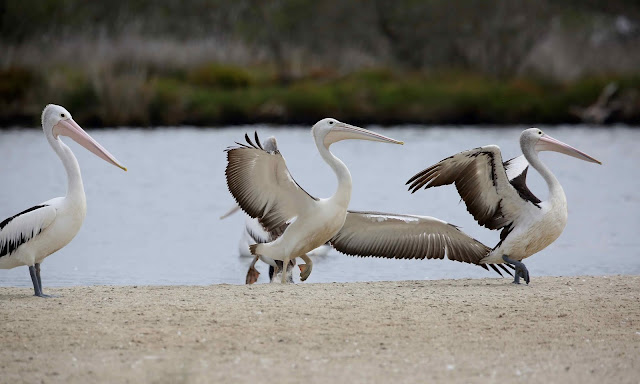 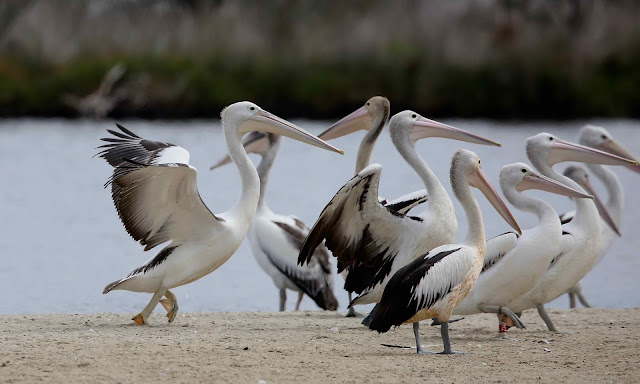 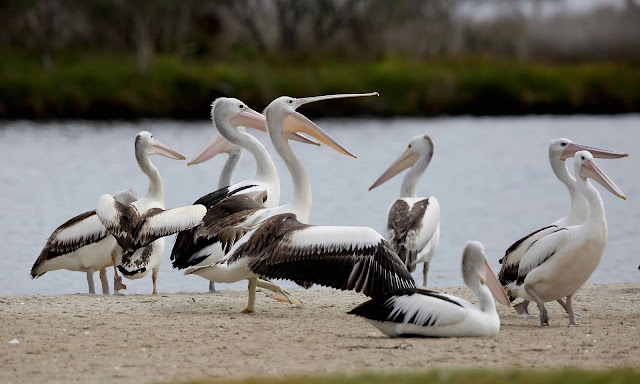 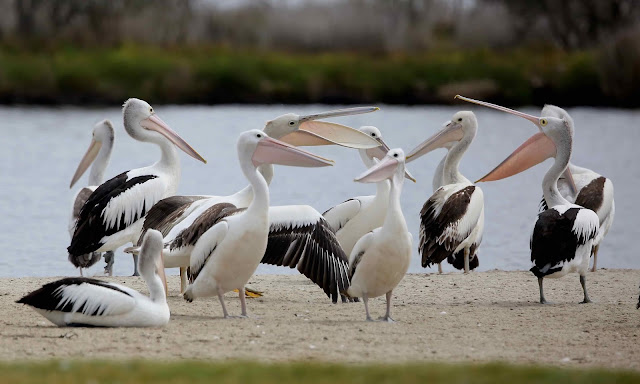 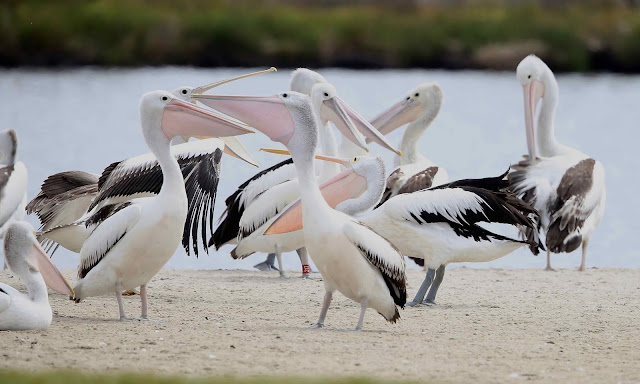 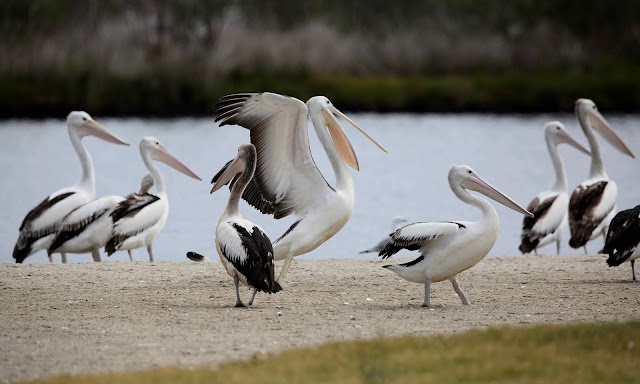 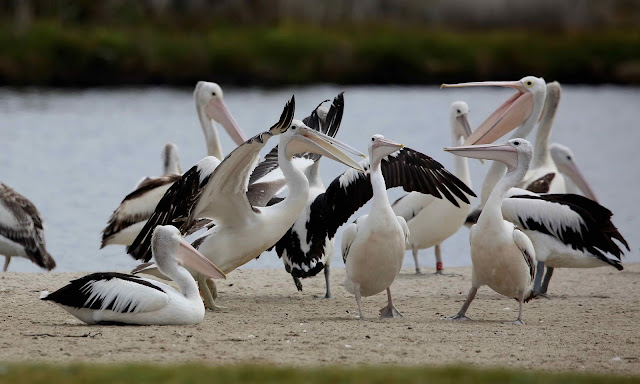 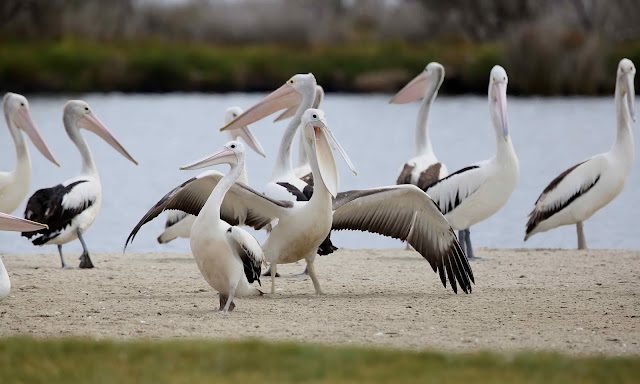 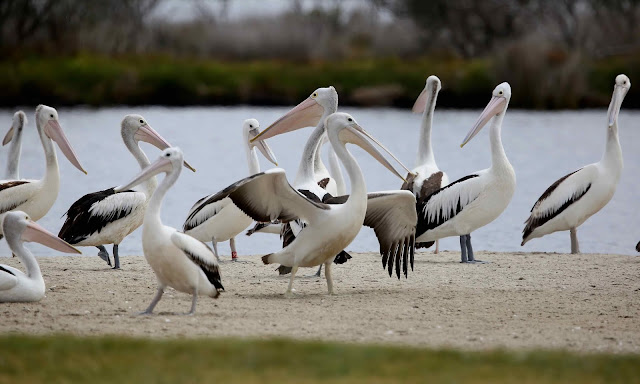 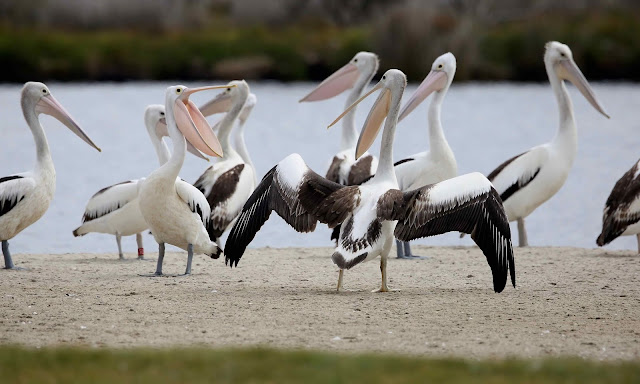 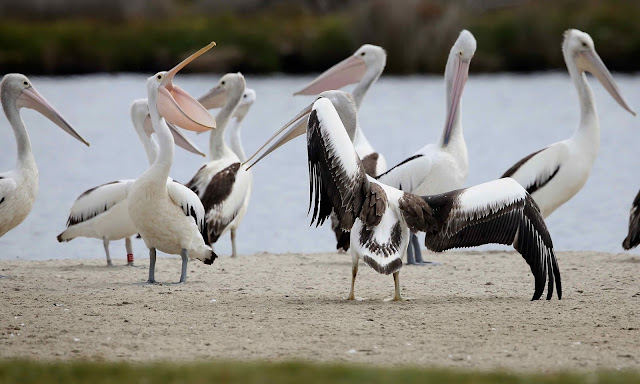 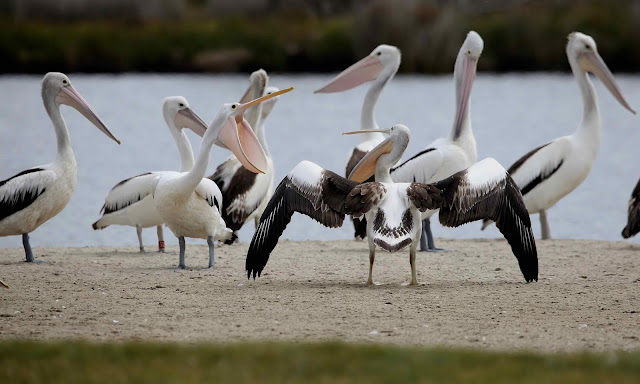 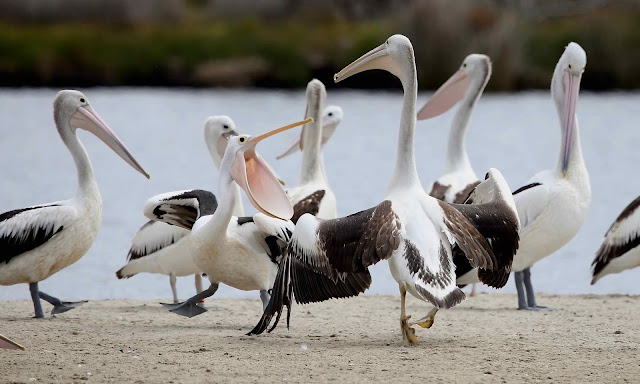 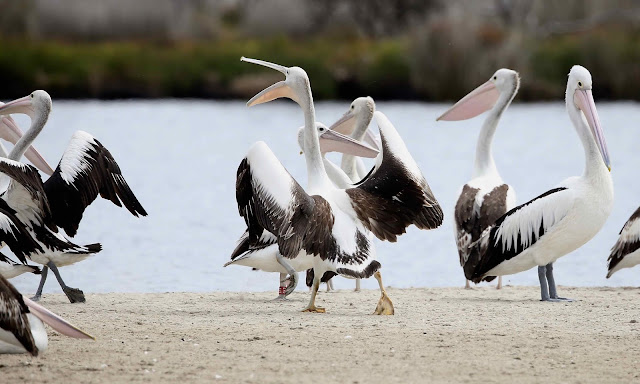 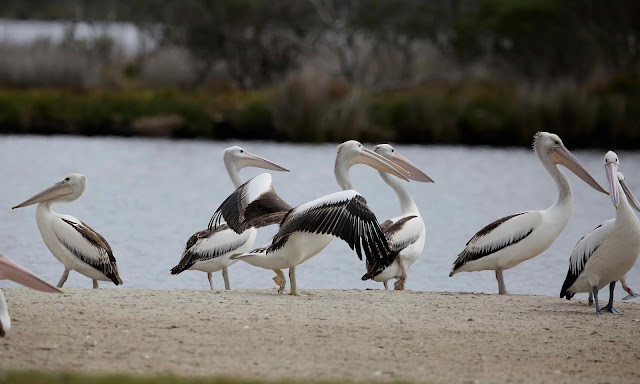 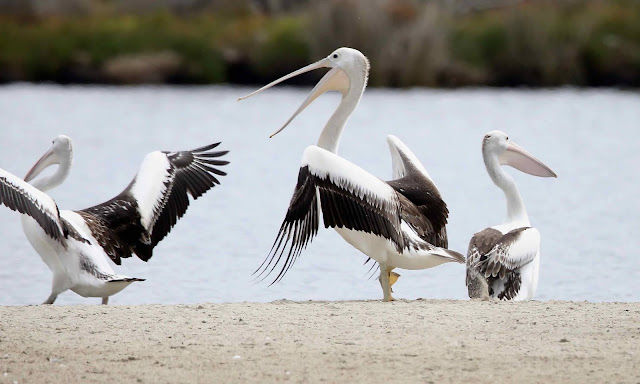 The rampage went on for about one and half minutes until eventually the young bird ran out of steam. This behaviour may achieve a food reward at times however it is probably mostly a counterproductive waste of energy.

The following photo shows an advanced juvenile being fed by a parent a week after the rampage sequence was photographed so the young are still dependent on their parents at this stage.


The juveniles are on the cusp of independence however their survival depends on them being able to find their own food – many young birds do not make it through this critical development phase especially in poor seasons when food resources are scarce. Hopefully all the banded Pelicans will survive to become long-lived adults however the odds are against them all making it.

Notes
(1)  This is a BirdLife Australia project managed by Deb Sullivan and funded under the Gippsland Lakes Consultative Committee. Licensing is through the Australian Animal Ethics and Departmental licensing.
(2)  This year’s Great Pelican Count is on 7th April.
For more information go to http://birdlife.org.au/projects/gippsland-lakes-program/great-pelican-count as well as the registration form.

Posted by Avithera at 10:31 No comments: