Recently I managed to photograph a group of Red Knots as they busily fed along the shore of Albifrons Island on the Gippsland Lakes.


Our main objective in this location was checking on the progress of two Pelican rookeries, looking for breeding Little and Fairy Terns and recording breeding activity of beach nesting birds including Hooded Plovers, Red-capped Plovers and Australian Pied Oystercatchers. During our regular weekly monitoring runs by boat on the Gippsland Lakes we encounter many other water bird species including both local and international/migrant shorebirds. Photos are taken of many of the birds for record purposes.

Returning to the Red Knots, the subject of this post, I took a series of photos of the Red Knots as they fed along the shoreline and came closer to us in the process. At home as I processed the day’s photos, nearly 200 images in all, I noticed the bird in the above photo had a flag. If you look at the above photo (suggest you enlarge it) and look closely at the third bird in from the right-hand end, the bird has its right leg lifted, you may be able to see a flag. At this discovery, I became very excited because finding flagged migrant shorebirds is not very common, at least from my experience.

My next step involved cropping the above image to get a closer look at the flag – see next image.


My next move was to look through all the other photos to see if there were any better shots of the flagged bird and to see if any of the other birds were flagged or banded. The following two photos more clearly show the flag and bands.


None of the other Red Knots had flags or bands. I then went back through photos of Red Knots taken during the previous week’s trip when we encountered thirteen Red Knots among Chestnut Teal. I found the subject bird with the flag however the photos did not show the flag clearly enough to see the letter CUT. The following two photos are of the thirteen Red Knots as they flew around with the Teal after being spooked. 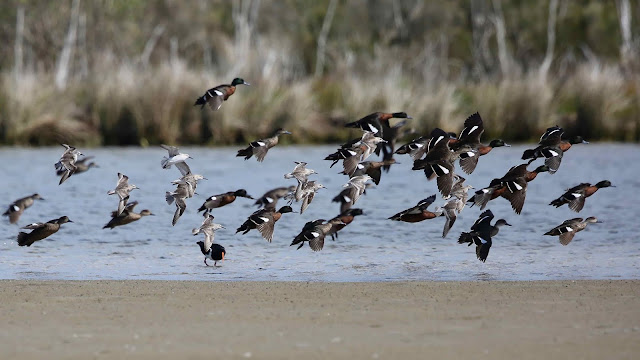 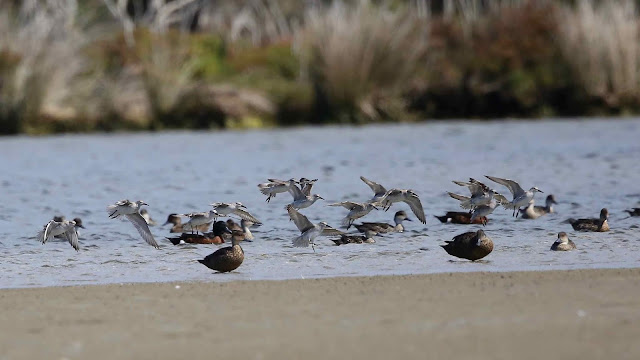 I now had a clear photo record of a flagged Red Knot, a migrant shorebird that breeds in the Chukotka region of Siberia. Given the serious threats that face our migrant shorebirds and the great effort researchers make to capture and fit bands and flags to these birds it is essential that the flag be reported. So, details of the sighting including photos were emailed to Joris Driessen, Leg Flag Sighting Operator, Australasian Wader Studies Group.

A prompt response came by reply email – Joris was as excited as I was – here is his reply:
Wooooh!!! Southern Chukotka, you beauty!! Cracker, guys! I will get in touch with the Russian banders – they’ll be pleased alright!

And pleased they were – here is the report back from Joris after the Russian researcher replied to his email:
Hi John & Deb, what an absolute cracker of a resighting (photos a must in cases like these, thanks!). Within 2 hours of your email I received the banding details from Pavel Tomkovich – a nice turnaround!
This bird is well known to him as it resides in his Meinypilgyno study area in Southern Chukotka. As per Pavel: “This bird was originally banded as a chick near Meinypilgyno, Chukotka on 29 June 2010 and later flagged as a locally breeding male on 5 June 2015.  Since then he was a local breeder annually being presumably solitary in 2016.  In 2018 his chicks hatched on 2 July, last time observed with the brood on 15 July. This is first observation of the bird outside the breeding grounds.”
Great stuff!
Joris


And here is a section of the official flagging report:

So, Red Knot white flag CUT is an eight-year-old male. He raised chicks in Meinypilgyno Southern Chukotka back in July of this year and since then has flown at least 11,479 kilometres to reach the Gippsland Lakes where I photographed him in December 2018.

To give you some appreciation of just how far this small bird has flown, along with his fellow travellers, look at the image below courtesy of Google Earth. The red flag at the top is on the precise location where CUT was banded in Siberia and I photographed him just above the oo in Google at the bottom of the image - and in between there is well over 11,000 kilometres of vastness!
What an undertaking, and he will do the return trip again in autumn and all going well repeat the annual cycle again and again every year of his lifetime - it is humbling to contemplate. 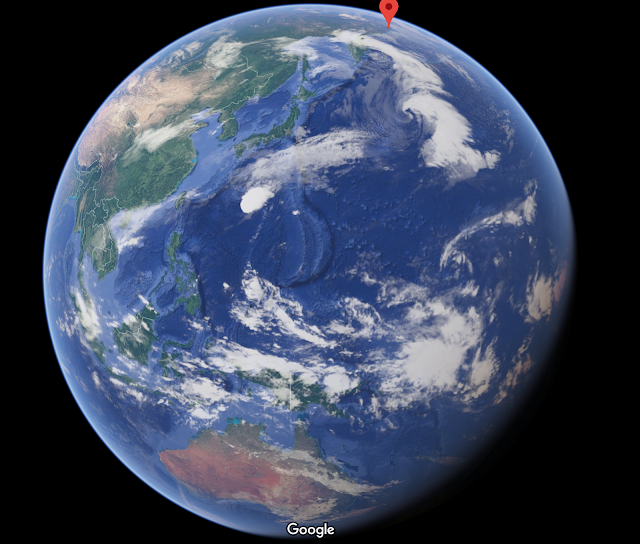 Photo files of the flagged bird together with a brief report on its sighting on the Gippsland Lakes was emailed to Pavel Tomkovich in Russia and less than 24 hours of finding the flagged bird in my photos I received a report on the bird’s background history and Pavel now knows where one of his research birds is - he has a valuable piece of data, the first observation of this bird outside of its breeding grounds in remote Siberia.

There are many joys and rewards to birding but I would have to say it is particularly satisfying to know in this case that I have made a small but important contribution to migrant shorebird research with my photos, albeit with some luck as I could easily have missed seeing the flagged bird in the photos.

To finish this post here are a few more photos of the Red Knots, amazing long distance travellers, feeding at Albifrons Island (albifrons is the species name of the Little Tern Sternula albifrons which have nested in the area in the past, hence the name). 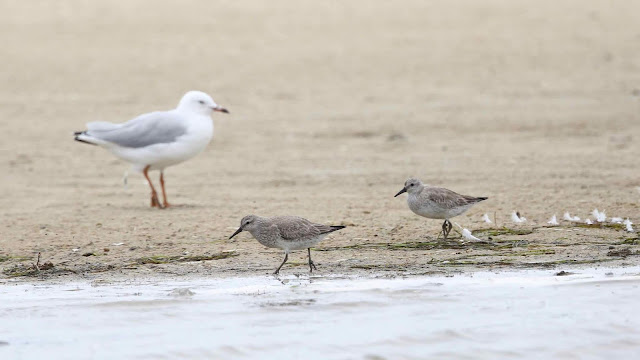 (1)  There are two subspecies of Red Knot found in Australia. Calidris canutus piersmai is found in north-west Australia and breeds in the New Siberian Islands and Calidris canutus rogersi occurs in eastern Australia and New Zealand and breeds in the Chukotka region of Siberia. From a common ancestor two subspecies have evolved to occupy geographically separated breeding grounds in Siberia and the birds stay separate when they fly vast distances to their over wintering grounds in the Southern hemisphere – truly amazing!
(2)  A modern DSLR camera fitted with powerful telephoto lens, or an equivalent digital camera with sufficient digital zoom capacity, is essential for capturing flag details as it is nearly always impossible to get close enough to shorebirds to read the flag numbers and letters even with good binoculars. The subject photos were taken hand held with a Canon 5D MKIII body and Canon 300mm prime lens fitted with a Canon 2X extender giving a focal length of 600mm.

Posted by Avithera at 20:57 No comments:

I have been fortunate again this breeding season to assist Deb Sullivan, BirdLife Australia Project Officer Gippsland Lakes, with monitoring Fairy and Little Terns and Pelican breeding colonies on the Gippsland Lakes.


There has been a separate Pelican breeding colony at the Western end of Crescent Island which first bred there in 2016/17 and again this season – they missed breeding there in 2017/18. This colony started much earlier than the Eastern colony.

Recently we observed an adult Pelican feeding its chick at the Eastern colony. The event took some time to unfold. At first we could see a possible feeding about to take place when an adult bird moved about amongst some young birds on the edge of the crèche with its wings held partially out which seemed to be a signal that a feed was on offer. However, it was not clear initially which chick belonged to the adult as several chicks showed interest.

After several chicks attempted to gain a feed, one bird emerged as the most likely contender to be fed. However much begging and manoeuvring was required by the chick before the feed was finally given. (1)


It is hard to interpret this behaviour, as it is with much animal behaviour. The young bird clearly wants to be fed so its begging behaviour is clear. However why the adult is so slow to give in to the begging and provide the chick with the food it so clearly wants is hard to understand. (3) Why does the parent withhold the food for so long and make the chick expend so much energy begging for a feed? Perhaps the parent is deliberately making the chick work for the feed, but is this for the exercise or survival value or is it to make the chick demonstrate it is really hungry and needs the food? Can greedy chicks consume more food than is good for them?


Chicks can become seriously oxygen deprived during feeding and can take some time to recover following feeding including exhibiting strange drunken like behaviour and aggression towards surrounding Pelicans – more information about this behaviour including photos can be found here: http://avithera.blogspot.com/2018/01/australian-pelican-juveniles-strange.html

The total time from when we noticed a feed was on offer to the finish of the feed took about seven and half minutes - I am not sure if this is typical for chicks of this age – obviously very small chicks are fed smaller quantities of food more often and no doubt the very young chicks do not have to expend so much energy getting their parent to give over the food.

A word about bird ethics. This Pelican breeding colony is on a narrow sand island beside a relatively busy waterway with many boats passing close by. The birds have adjusted to this level of disturbance. Our observations were made from a boat positioned some distance off-shore and the photos were taken with a telephoto lens (600mm focal length) and cropped later during processing of the images. By this means there was no disturbance to the colony.

In the next few weeks many of the young in the photos will be fitted with a metal leg band and a numbered brightly coloured plastic band and blood and DNA samples will be taken as part of the monitoring work under contract to DELWP.( 5)

(1)    Adult birds appeared to deliberately remain distant from the main crèche which left the chick to seek the parent.
(2)    This behaviour could also be sibling rivalry if the adult successfully managed to raise more than one chick to this stage.
(3)    The length of time taken to actually allow the chick to feed could also be parental preparation.  It must take an enormous amount of physical effort on the parent’s behalf to accommodate the chicks physical shape. I also suspect that the crop would need rotation to allow the chick to feed as well.
Some adults do this much faster and require little begging time from the chick to encourage regurgitation.
(4)    The average time recorded over many feeds last year took approx. 2min:45sec.  The length of time this female took to feed this young one did appear to be much longer than I have witnessed before.
(5)    This is a BirdLife project funded under the Gippsland Lakes Consultative Committee. Licensing is through the Australian Animal Ethics and Departmental licensing (it is multi agency permits)

Posted by Avithera at 11:37 No comments: