The various species of the Corvidae family in Australia, - the Ravens and Crows, can be a challenge to identify in the field. Here in coastal East Gippsland we have three species of Ravens - Australian, Little and Forest - and no Crows.

At a distance and in flight it is near impossible to identify which species of Raven it is in coastal areas of East Gippsland where all three species are found. If the birds are calling this can be a way of identifying the species. The Aussie Raven’s call is a distinctive and classic sound in the Australian bush and outback.

The habit of the Little Raven flicking its wings when perched and calling can be a useful way to ID this species at a distance as both the Australian and Forest Ravens do not wing-flick.

Ravens are intelligent birds and as scavengers they adapt well to urban life where they can become relatively tame. However in rural and bush areas they are usually wary and getting close for photos can be difficult. Away from towns and cities, camping and picnic grounds may be an exception as the birds get used to people in these settings and know food scraps may be on offer.

The following sequence of photos of an Australian Raven were taken at the Willis camp ground on the Snowy River in the Alpine National Park. The photos show the prominent throat hackles well and also the bare patch of skin under the base of the bill and cheek – the other corvid species do not have this bare patch. The Forest and Little Ravens also have throat hackles however they are much smaller.

To end I have included a photo of a Forest Raven for comparison – they look very similar, however the Forest has a deeper bill, smaller hackles and no bare patch of skin under the base of the bill.

Ravens are not everyone’s favourite bird and they are seen as a scourge by many farmers, especially sheep farmers, as Ravens can inflict a lot of damage on weakened and downed lambs or sheep. That said, they do play an important ecosystem role in helping to clean up carrion and they also consume a lot of insects. For me the Aussie Raven’s mournful call is deeply evocative of the Australian outback.
Posted by Avithera at 15:50 1 comment:

Birds which have been evolving for many millions of years have developed a large range of courtship and mating behaviours which are critical to successful reproduction. Recently I was able to capture a sequence of photos of the mating behaviour of a pair of Fairy Terns (Sternula nereis nereis) starting with the male approaching with a fish offering, then moving on to so called fish-wiping and ending with copulation (see note 1).

Early in 2017, I published a post showing a failed mating attempt: http://avithera.blogspot.com.au/2017/01/fairy-tern-pair-will-they-mate-or-wont.html

Many mating attempts are not successful, with some simply interrupted and others involving a female that seems receptive, but was perhaps deceptive, only putting on a show to obtain the fish being offered.

According to HANZAB (see note 2) the bonds between Fairy Terns are poorly known. Courtship may involve fish-carrying pursuit flights, fish-parading and courtship feeding (male feeds the female). The pair in this post have no doubt courted, selected a nest site and dug a nest scrape at this stage.

The following sequence of photos seems to show this mating attempt ended successfully though we cannot know if an egg has been fertilised which is the only real measure of success.


A second later this four-minute (see note 3) ritual ends abruptly, however this ending is also a beginning – with fertilisation, a new generation of Fairy Terns is under way.

(1) The photos in this post have been obtained while working with a government biodiversity officer at a small tern breeding colony using a long telephoto lens to ensure there was no disturbance to the breeding birds or the colony. When photographing any birds the welfare of the birds must always come first.

(3) The times recorded on the photo files allowed me to calculate that just over 4 minutes elapsed from the first to the last photo.
Posted by Avithera at 13:14 No comments:

Small numbers of Scarlet Honeyeaters (Myzomela sanguinolenta) have always been recorded in East Gippsland. I recall seeing my first Scarlets while camping at Wingan Inlet well over 20 years ago now. However, about four years ago East Gippsland experienced a major invasion of Scarlet Honeyeaters associated with a mass flowering of many eucalypt species. Since then we have had relatively large numbers of Scarlets around in spring and summer and I suspect we’ve had some over-wintering birds also.

This spring the Scarlets have been recorded in large numbers further west in Victoria as reported in this media release by BirdLife Australia: http://birdlife.org.au/media/invasion/

The Scarlet Honeyeater is sedentary in the northern parts of its range, an erratic migratory visitor to the southern parts and elsewhere a nomad attracted by the presence of blossom.

In 2015, I published this post on a pair of Scarlets that were resident in our garden for a few months: http://avithera.blogspot.com.au/2015/10/scarlet-honeyeater-brilliant-red-nomad.html

Once again this spring, we have Scarlets resident and breeding on our property.  The same tree that attracted them in 2015 is again in blossom and a magnet for the Scarlet and other honeyeaters including New Holland, Yellow-faced, White-naped as well as Eastern Spinebills and Little and Red Wattlebirds.

I could not resist capturing some more photos of the vivid red and black male Scarlets and some juvenile birds with their yellow gapes and sharing them with another post. 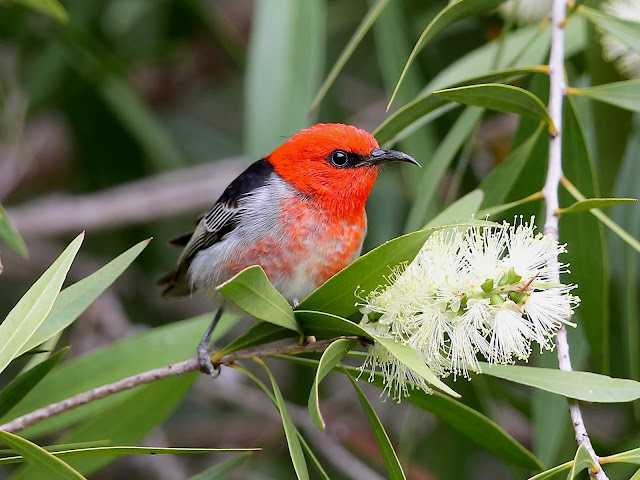 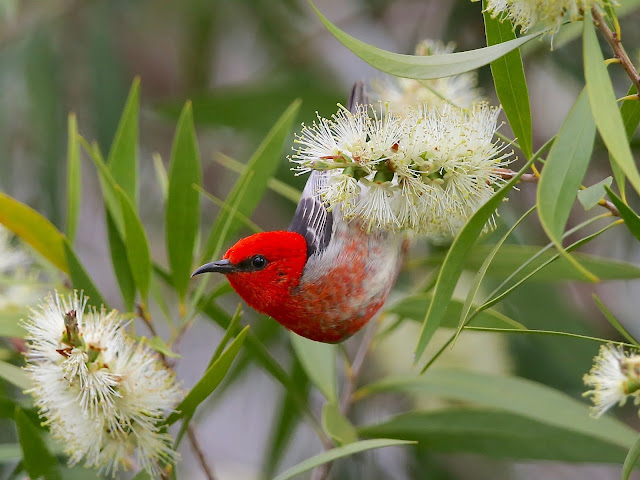 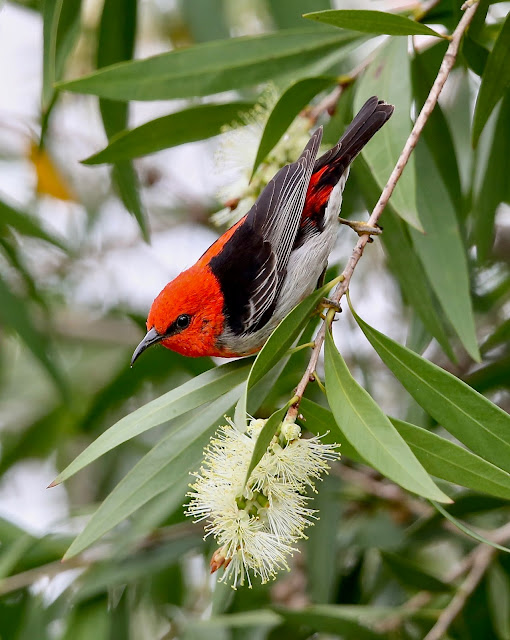 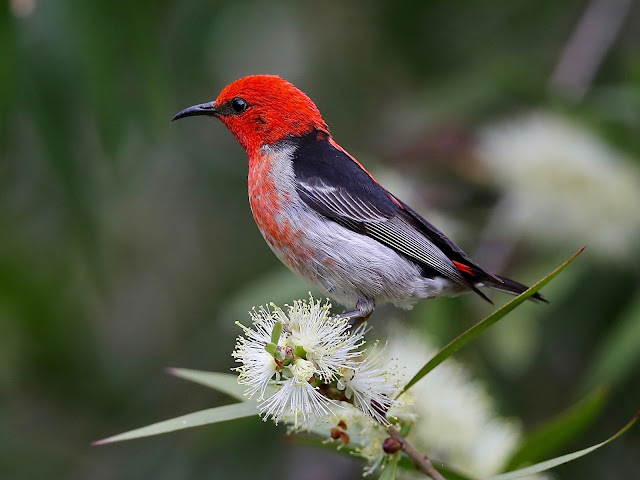 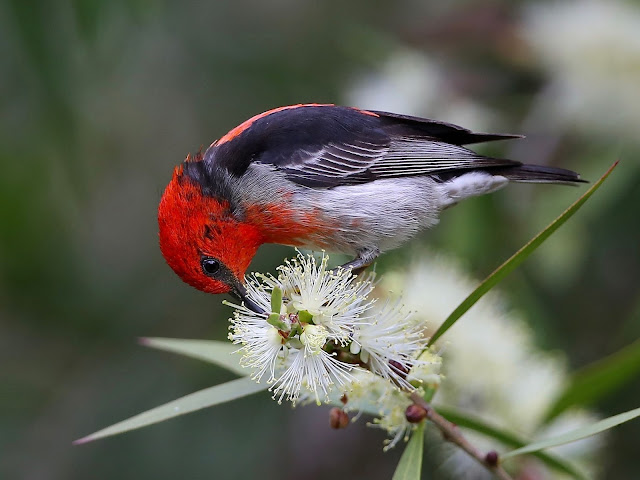 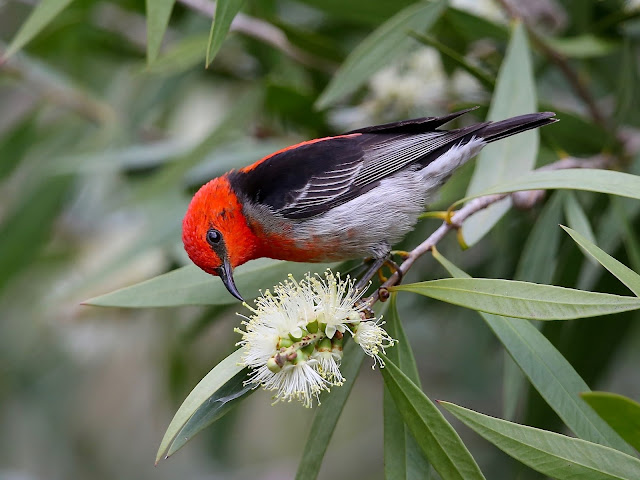 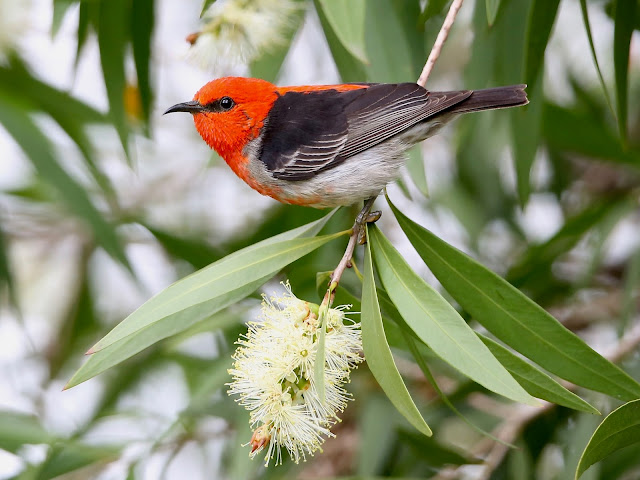 There were several young scarlets busy extracting nectar from the blossom – the juveniles were raised in our garden. 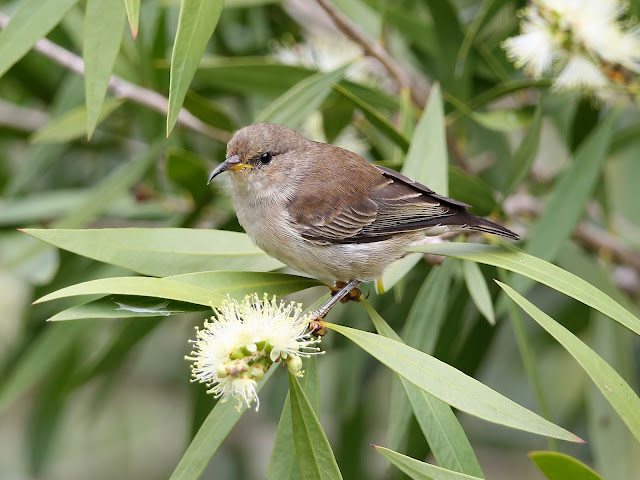 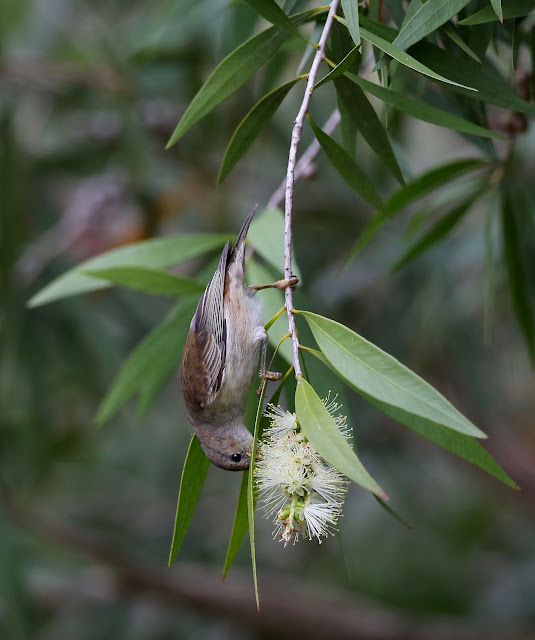 The tree where I took the above photos had at times up to three adult males and four juveniles feeding however I was not able to see any adult females (see photos of adult females in earlier blog post - link given above) so wondered if they were sitting on nests raising another brood?

Posted by Avithera at 16:12 No comments: