The Brown Goshawk juvenile siblings are still in residence at our place and today two more photo opportunities presented. I liked the images captured of one of the birds perched in the old Peppercorn tree in our garden.

The bird’s position and my position meant the photos were taken against strong back light so I had to ramp up the exposure value to +1.33 to avoid the bird becoming a dark silhouette. While this deliberate over-exposure has blown out the background to a bright off white, the shaded light from the Peppercorn Tree on the Goshawk has resulted in amazing light which reveals beautiful feather detail and subtle colour.

As the bird perched it appeared to be hyper aware and as it looked about it presented several attractive and expressive poses. Here is a selection of the images. 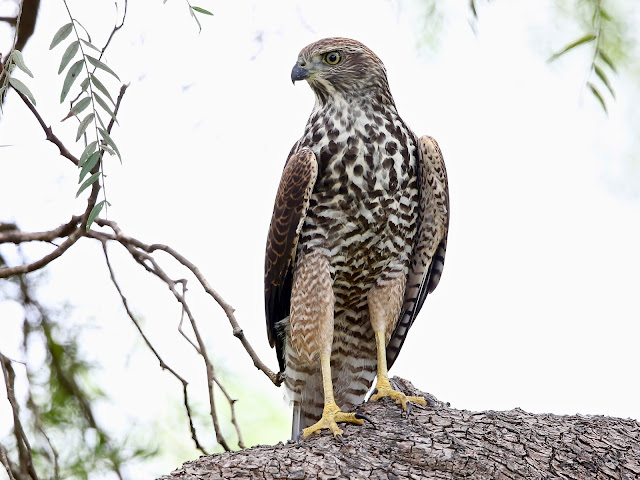 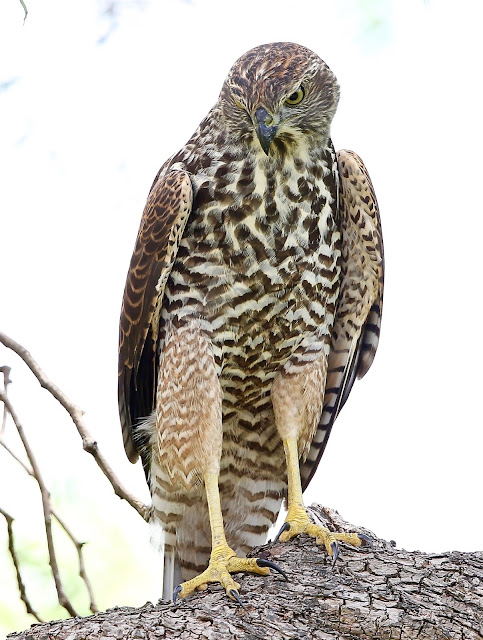 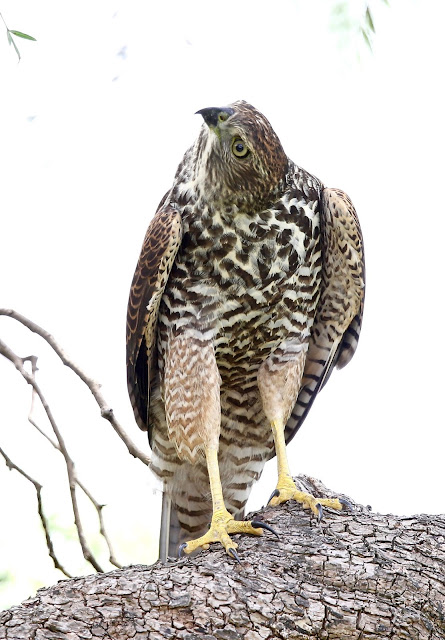 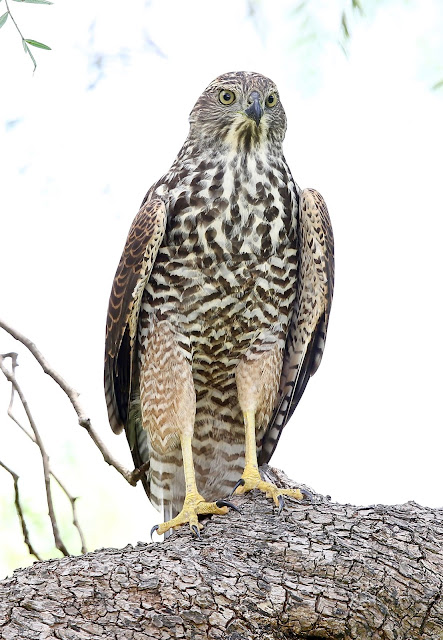 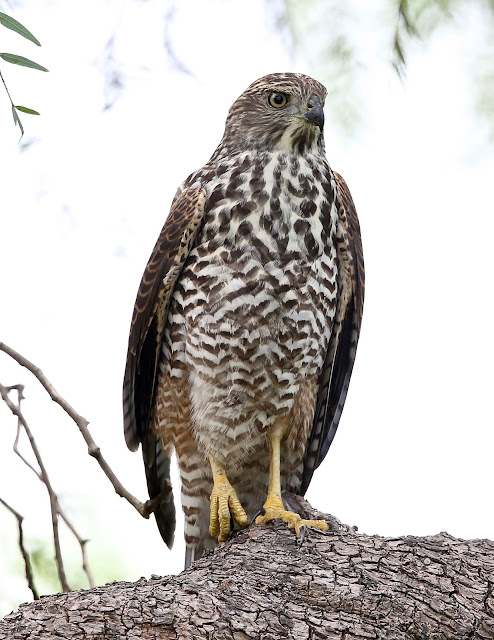 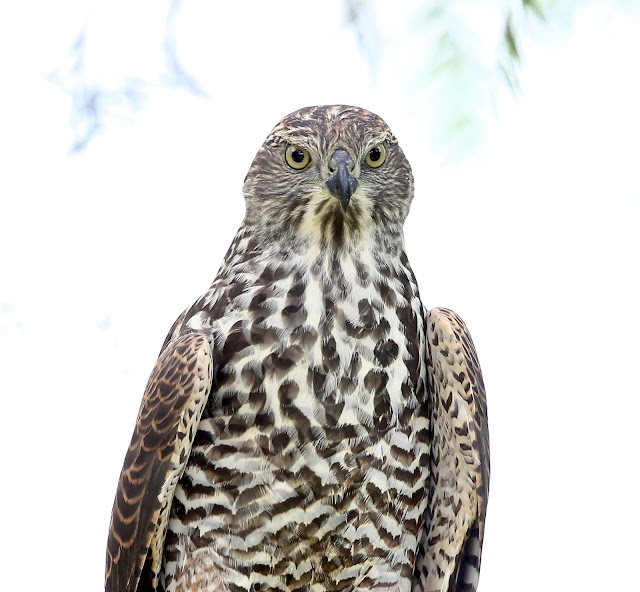 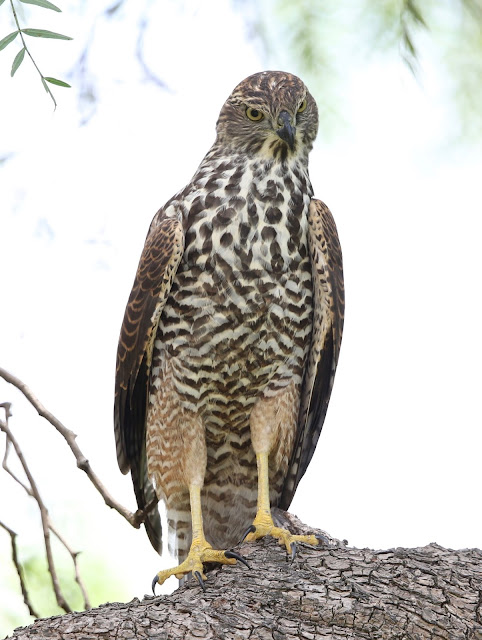 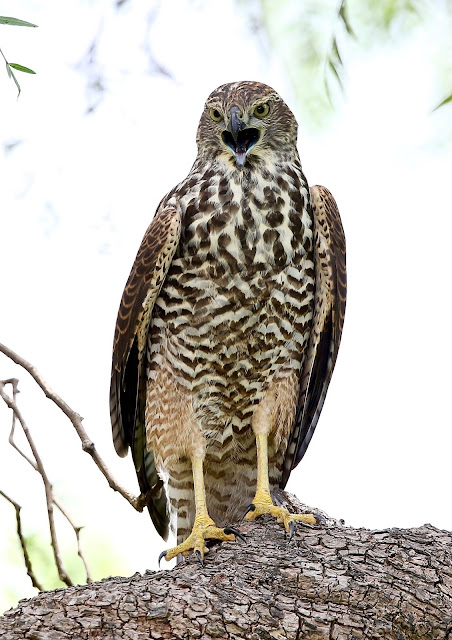 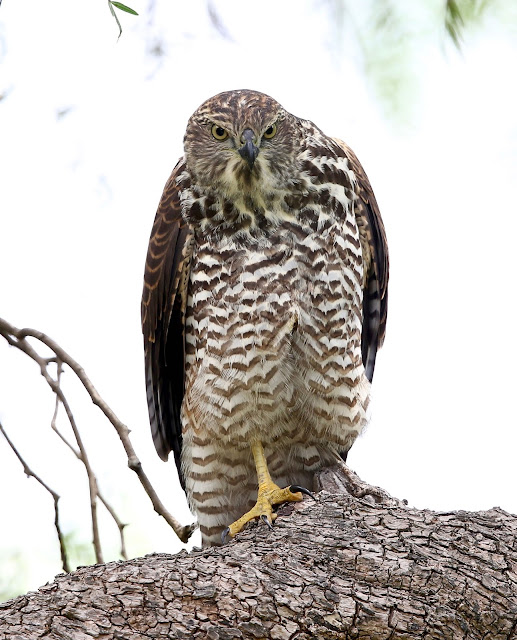 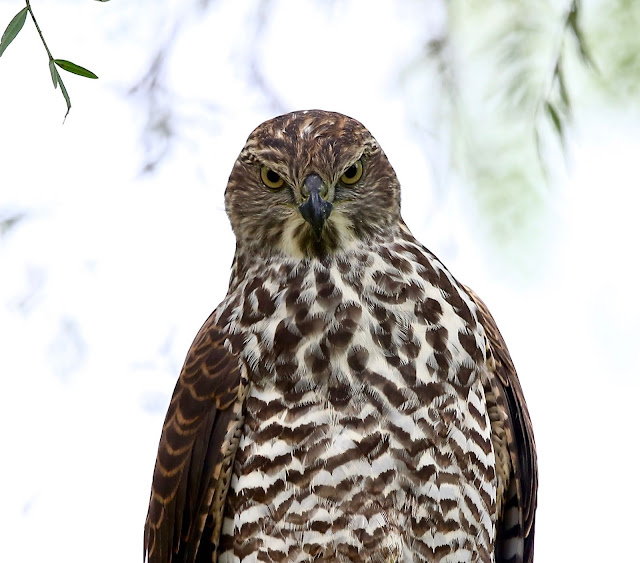 A pair of Brown Goshawks (Accipiter fasciatus fasciatus(1)) breed each year in forest near our property.  Most years in December and January the juveniles spend their early weeks close to our house learning the hunting skills critical to their survival before their range expands and they disperse. This season I first noticed the pair at the start of January 2018 and three weeks later they are still in the area.

We have not seen the adults/parents so I suspect the young ones are on their own. Adult Brown Goshawks are shy skulking birds which are hard to find and mostly we come across them by accident when they flush from a concealed perch(2) or we see them flying at a distance, so getting photos of the adults is very much a chance affair. By comparison our temporary resident juveniles are very noisy and so signal their location and movements by their calls, affording opportunities to capture photos while they move about within their currently small range.

I suspect the sibling pair are male and female as one bird is noticeably larger than the other – the female. They stay close together and often call to one another. When one is successful in capturing prey the other bird often chases it in the hope of obtaining a feed – I have observed several close-pursuit flights.

Over the last three weeks I have managed to capture some photos of the birds though not close together with both in one photo.


A pair spent a lot of time in this area last season and I am sure they reduced the size of the Bellbird population. This season, 2017/18, I first found and photographed a pair of juveniles on the 4th of January in Manna Gums near the Bellbird colony.


For the first week or so they mostly stayed along the Nicholson River where tall Manna Gums provided concealed perches from which they could look for unsuspecting small bird prey.

By the 14th of January the pair were making regular hunting forays away from the river and over paddocks around our house and even perching briefly in trees in our garden. So, I no longer needed to walk down to the river the get photos, their calls close to the house alerted me to their presence when I could grab the camera and go out to see if they afforded me a photo opportunity. Hit and miss I know but over a couple of weeks, with the pair becoming more comfortable around the house garden, the chances for photos increased.


Another photo opportunity when one of the birds perched above a stock trough.


About 6.45pm last evening a pursuit flight seen from our kitchen window ended in the very old Peppercorn tree in our garden. I think one bird had a small prey item and the other was pursuing its sibling in the hope of a feed. As I slowly edged the door open and pointed the camera at the pair, the bird with the prey took off leaving the other bird perched briefly for a couple of photos before it also took off. They are shy and generally won’t stay long once they have spotted me.


It has been a pleasure watching this magnificent pair of young raptors over the past three weeks and an enjoyable challenge getting some photos of them. I guess they will soon move on and we must wait another year to see if a new pair of juveniles turns up – until then we must rely on lucky encounters to see Brown Goshawks.