Sanderling – another unusual visitor to the Lakes

Albifrons Island, a low sand island almost completely devoid of vegetation, has proved to be a place where unusual migrant shorebird visitors can sometimes be found on the Gippsland Lakes.  Nearby, Crescent, Waddy and Barton Islands are also good places to find unusual shorebird visitors.

Recently we found a single Sanderling among Red-necked Stints on Albifrons Island. The Sanderling is another unusual shorebird for the Lakes. In this case the Sanderling was out of its preferred habitat.  They are usually found in small flocks on ocean beaches where they specialise in feeding on small invertebrates living in the sand exposed by receding waves and are only occasionally found on tidal mud flats.

Sanderling breed in the high tundra of Asia and North America and they migrate to Europe, Africa, southern Asia, Australasia and North and South America. They can be found on sandy ocean beaches around much of the Australian coastline.

The Sanderling we observed was very busy feeding by probing with its short bill deep into the sand and sea grass.

Sanderling have been described as “fleet-footed” which seems to be at odds with a stout short-legged bird. No doubt they need to be fast on their feet to operate in the zone where ocean waves surge up a beach and then quickly retreat. 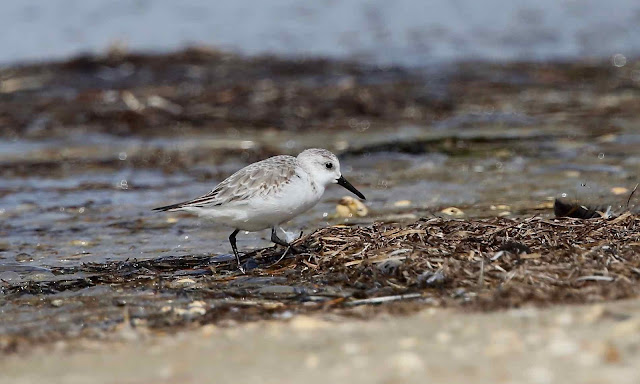 The 90 Mile Beach, which is often pounded by big Bass Strait waves, is only a few hundred metres away across the barrier sand dunes from Albifrons Island. The lone Sanderling has no doubt come across from the ocean beach to forage in the protected waters of the Gippsland Lakes and we were lucky to come across the bird during this rare visit.

Posted by Avithera at 16:08 No comments:

Late one afternoon while surveying a small tern breeding colony we found a single Tattler alone on the shore of one of the islands in Lake Tyers near the ocean beach entrance.

Grey-tailed Tattlers are very similar to Wandering Tattlers, however the latter are much less common in Australia. They are mainly found along the Queensland and northern NSW coasts whereas the Grey-tails can be found right around the Australian coastline though they are much more common in the north. You can see a couple of photos of a Wandering Tattler here: http://avithera.blogspot.com/2016/11/coral-cay-island-birds-great-barrier_22.html

When first sighted, the Grey-tailed Tattler was some distance away and we were looking directly into the sun to observe the bird. The poor views however were just good enough to indicate this bird was not one of the more familiar shorebirds in our area so a closer look and photos were required to confirm a tentative Tattler ID. Given the sandy/muddy exposed flats of the saline lake the bird was unlikely to be the much rarer Wandering Tattler which tend to inhabit rocky shorelines. So, I back tracked and waded out to a closer position with a better sun angle for some photos to ID the bird.

Fortunately, as I slowly approached in stages the lone bird stayed on the sand spit by the water’s edge. A couple of times the bird called and looked like it might fly however it settled each time. The call was a two-note whistle which was another indication that this was a Grey-tail and not a Wandering Tattle which has a rippling trill of 6 to 10 notes.

Eventually I arrived at the birds FID (flight initiation distance) but close enough for some photos. 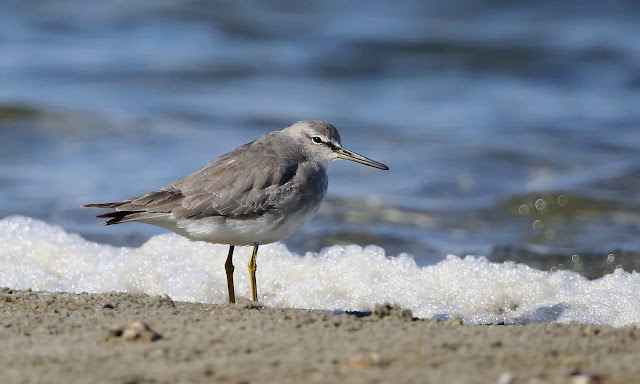 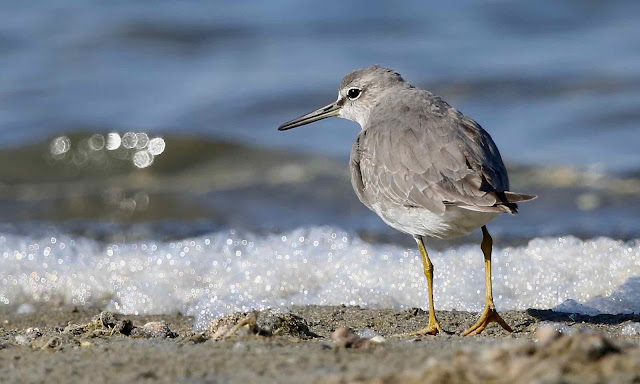 After this photo, I moved slowly away leaving the bird in peace, pleased I could approach without the bird taking flight, pleased the ID of this unusual visitor was confirmed and pleased I had some photos.

Posted by Avithera at 13:30 No comments:

One of the advantages of conducting weekly surveys for beach nesting birds by boat across a large area of the Gippsland Lakes (excluding the Lake Wellington end of the Lakes) is that we can also record visiting migrant shorebirds including some rare visitors to the Lakes.

On 18 December 2018 we picked up a lone Lesser Sand Plover (Charadrius mongolus) (1) in company with a couple of Red-capped Plovers on Pelican Island. This sighting was reported to Eremaea Birdlines Victoria where it received a highlight blue star rating.

We then found another Lesser Sand Plover 21 days later, on Albiforns Island (near Crescent Is) on 8 January 2019. This new site is approximately 9 kilometres south west of the Pelican Is site. There is a very good chance that the two sightings are of the same bird.

Another Lesser Sand Plover sighting by Robert Wright at Crescent Island, (near Albifrons Island) on 10 January 2019 and reported on Birdline Victoria, is likely to be the same bird we found in December and again on  8 January.

Then on 15 January we found the Plover again on Albifrons Island, this time in company with some Red-necked Stints.


While we were observing the Plover it suddenly looked up at the sky and then moved into a crouched position where it sat very still for some time. A small raptor was seen passing by, possibly a Nankeen Kestrel, so it is likely the Plover’s crouching was in response to this threat. The bird lying motionless on the sea grass and other debris would have been very hard to see from above.

When in the field it is always worth looking carefully at small shorebirds, especially when in small flocks, as you never know when an unusual visitor might turn up. Taking photos of any unusual birds for checking/verifying ID with field guides later is a good idea and if a rare species is found, a photo is essential for verification of the sighting.

Lesser is by comparison with the very similar but slightly larger Greater Sand Plover.

Sand comes from the sandy desert habitats where Sand Plovers prefer to breed.

And mongolus from Mongolia where they can be found breeding.

Posted by Avithera at 15:12 No comments: