The Scarlet Honeyeater (Myzomela sanguinolenta), is a blossom nomad, with some populations sedentary in the north of their range, and others migrating south in the summer.
In recent years the number of Scarlet Honeyeaters in East Gippsland has increased enormously with a very large influx of birds following a major flowering event, when most eucalypt species across East Gippsland all flowered in one season. Even though eucalyptus flowering events have been far more moderate since then, good numbers of Scarlet Honeyeaters are still coming to East Gippsland each spring.
Note: enlarge photos with a left click of the mouse and then use the mouse wheel to scroll back and forth through the photos (can't view captions in this mode). For iPad tap on any photo and then select other images from thumbnails displayed at bottom of scene. To go back to post tap on X at top right hand corner of screen.


The Scarlet Honeyeater at 10-11 cm long is our smallest honeyeater followed closely by the Black Honeyeater at 10-12 cm.
Despite the vivid red of the male, they can be surprisingly hard to find high in the forest canopy even when you can hear the loud, clear, distinctive and pleasant calls. Fortunately we have a resident pair in our garden at present and they spend a lot of time feeding in a callistemon heavy with yellow flowers and nectar, making them relatively easy to see and photograph.
The same tree also attracts Red and Little Wattlebirds, New Holland and Yellow-faced Honeyeaters, Eastern Spinebills and large numbers of introduced honeybees. When the loud and aggressive wattlebirds move in, the smaller honeyeaters leave but they soon move back once the larger birds depart.
The Scarlet Honeyeaters are somewhat shy feeders, not often coming out to the open outer edges of the callistemon to feed. So capturing photos is not easy and much time and patience is required.
After many frustrating attempts to obtain some photos of the feeding pair, the male took a break out in the open on a Wonga Vine tendril to have a preen of his head feathers giving an opportunity for some close up portraits against moderately strong backlight. 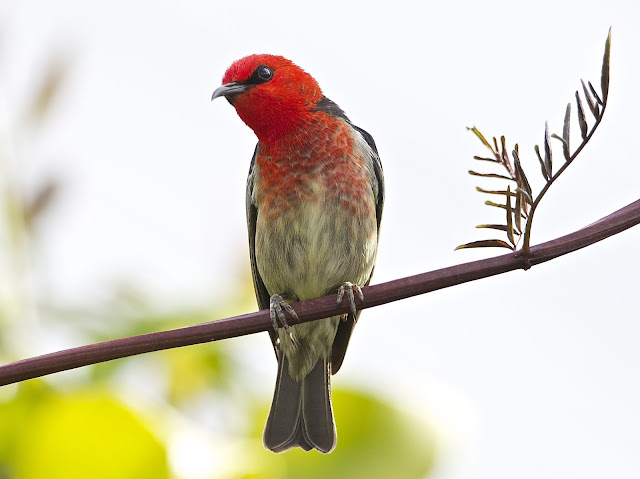 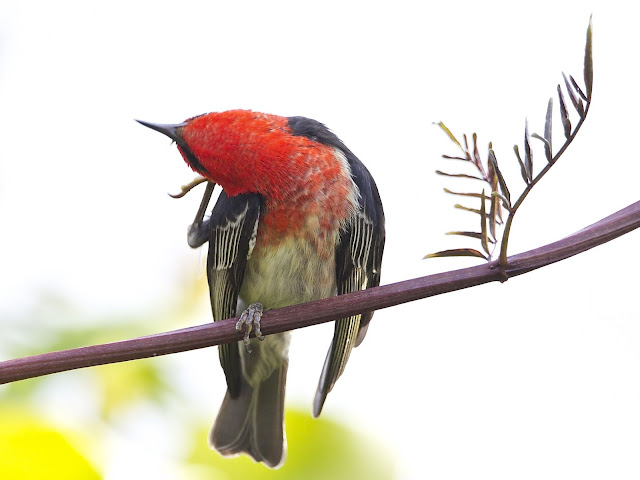 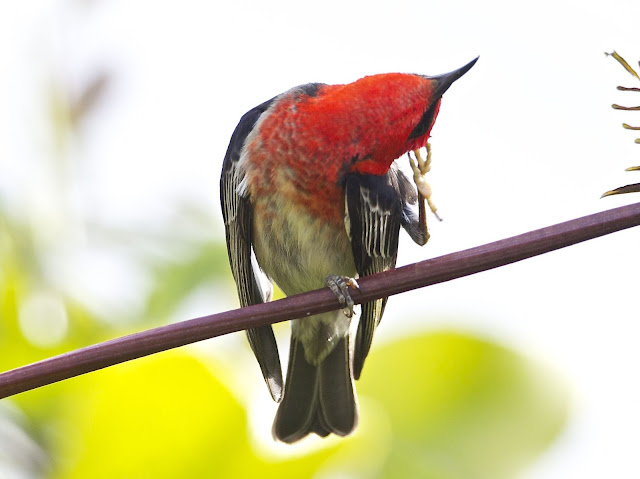 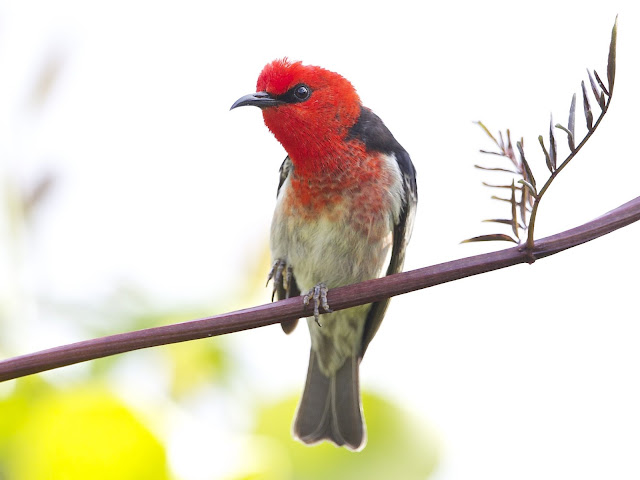 Posted by Avithera at 12:30 No comments:

The Tawny Frogmouth nest according to Morcombe is,  “a very rough, untidy, loosely constructed platform of large sticks lined with a few leaves in a fork from 2 to 15 metres up”. Morcombe describes a nest I recently photographed very well.
The male incubates by day and the female by night, so the bird in the following photo must be a male.
As Frogmouths are nocturnal and feed at night, presumably the male must feed the female during incubation if she is on the nest at night.
Frogmouth clutches range from 2 to 5 eggs. The eggs take about 30 days to hatch and the young leave the nest aged about 4 weeks, so there is some time to follow the progress of this nesting pair and hopefully get some photos of the young birds on the nest.
I photographed two young birds with parents close by at the same site in February 2015 so it is likely that the nesting pair in the above photos are the parents of last season’s birds seen in the following photo.
Adult birds roost close together in the lead up to breeding, the breeding season runs from August to December.
As they are not tree hollow dependent nesters, this probably helps explain why the Tawny Frogmouth is such a wide-ranging nocturnal species compared with owls that require relatively large nest hollows in old trees.
Posted by Avithera at 08:35 No comments:

The Silver Gull is one of our best-known native birds. Love them or hate them you have to admire their bold and adventurous spirit that has seen them adapt very well to human settlements and range far inland from their preferred coastal habitats.
A gregarious species, they are also highly quarrelsome and some birds seek through aggressive display to assert dominance in groups, especially where there is competition for food. A good place to see this behavior is in a park, preferably in close proximity to take away food shops, where left over fish and chips or other food is being fed to a group of Silver Gulls. There is inevitably one cranky adult bird that puts on an aggressive display in an attempt to force other birds away. The bird is often so engrossed in the aggressive activity that it misses out on food opportunities.
Recently on the beach at Point Lonsdale I came upon a lone adult Silver Gull with a very brilliant scarlet bill and legs and decided to take a photo.
While still looking through the camera viewfinder the bird commenced a display I have seen many times before and which I take to be an aggressive display to assert dominance over other gulls.
However in this case the bird was alone, so what was the point of this display?
Then suddenly another gull landed and the cause for the display became obvious. The display had commenced while the second bird was in flight and some distance off.
I am really not sure what to make of the behavior captured in the above shots however it does appear to demonstrate the Silver Gull’s quarrelsome nature, seen here even when food is not involved and there was plenty of space available on the beach for both birds.
An alternative explanation for the behavior may be that the first bird was a female, the male and female look the same, and the second bird was a male coming in to try and woo the female, no doubt gulls have no trouble telling female from male, and she warned him off and eventually had to peck him to make clear she was not interested in his advances?
It is often hard to know what birds are up to!

Posted by Avithera at 14:27 No comments: