The last day of 2015.  Another hot day to end the year, 37oC forecast and it is 36 as I write this at 1pm. I often ponder on days like this how our feathered friends, especially the small birds, manage to survive the heat. I guess while some do indeed survive the reality is that many must perish on the extreme days or run of days. Of course the high summer temperatures in East Gippsland are nothing compared with inland Australia.

Imagine 50 plus degree days, day after day, on sand dunes in the Simpson Desert for example. How do tiny Ayrean Grasswrens and other small birds survive these blistering temperatures sheltering in cane-grass on the dune tops? Perhaps they seek refuge down burrows excavated by other dune inhabitants? As we shelter in the cool of our dwellings and air conditioned cars, spare a thought for our feathered friends over the summer period.

To end 2015 here are some miscellaneous photos from November and December that did not make it into blog posts – the brief caption notes explain the photos.

The following five photos are a sequence showing a Laughing Kookaburra capturing a crab on Cunninghame Arm at Lakes Entrance on the Gippsland Lakes in late November.

Thank you for following my blog posts, I hope you have seen at least some of my 2015 posts and enjoyed the photos and associated notes and observations.

Best wishes for a rich and rewarding birding year in 2016.
Posted by Avithera at 16:15 No comments:

Small terns on the Gippsland Lakes

Both species are very similar in appearance and habits, making identification in the field difficult even for adult birds in breeding plumage when there are some distinctive features that help separate the two species. In non breeding and eclipse plumage, identification is nearly impossible.

The two species largely occupy separate sections of the Australian coast with Fairy Terns found along the south and west coasts and Little Terns found along the east and north coast. This can be helpful for field identification in locations where one species or the other is mainly found. However, there is overlap, particular in eastern Victoria including the Gippsland Lakes, where both species are regularly found and where both species breed.

But for birders on the Gippsland Lakes small tern identification can be a challenge especially at a distance. Adding to the challenge is the fact that non-breeding Little Terns from the Asian population overwinter in Australia. Records of banded birds have shown that birds that have bred in Japan appear on the Gippsland Lakes during our summer, though these birds are never in breeding plumage. It is also suspected that Little and Fairy Terns have interbred, giving rise to hybrid birds. This may also be contributing to the identification challenge of these small terns.

I was recently privileged to make two visits to Crescent island on the Gippsland Lakes south of Paynesville where a breeding colony of Fairy and Little Terns has been established on a recently dredged sand spit. The project to restore the integrity of Crescent Island was a multi- government effort initiated by Bairnsdale based Faye Bedford – Biodiversity Officer, Regional Services, Department of Environment, Land, Water and Planning. This is a good news win-win story where channels have been deepened for boats and habitat created and enhanced for threatened species such as Fairy and Little Terns (Fairy Terns are listed as Endangered and Little Terns as Vulnerable in Victoria).

Unfortunately for small terns and many other beach nesting birds their preferred sandy beach habitat is also often ideal for human recreational activities. To protect these birds, especially during their critical breeding season, which also coincides with our peak use of beaches, exclusion signage and sometimes fencing is required.

Even with the utmost care it is impossible when visiting a small tern breeding colony to not disturb the birds so our time there was necessarily limited by consideration for the welfare of the birds and their chicks. We kept to the margins of the breeding area to minimise disturbance and to avoid inadvertently treading on eggs which are well camouflaged and therefore very hard to see on nests that are mere scraped depressions in the sand and shell grit.

The following selection of photos captures both species of terns including some birds at nests with chicks.

The small terns seem so fragile - continued human population growth and development plus sea level rise is a growing threat to their habitat – let’s hope we can wisely manage their environment and assure a future for them.
Posted by Avithera at 17:34 No comments:

This post shows photos of the two young Frogmouths produced by the nesting parents featured in an earlier post dated Wednesday, 14 October 2015:
http://avithera.blogspot.com.au/2015/10/tawny-frogmouths-nesting.html

After observing the adult male incubating eggs by day for some time, they eventually hatched and two young reached the size where their heads appeared above the top of the nest rim.

When the young had reached a size where they could not be concealed within the nest, I became concerned on one visit when I could only see one of the young birds.

I walked around the tree twice to get different views of the nest to see if the other young bird was there, speculating as I went on what might have become of the missing chick. On a third round I managed to pick up what looked like a small head in the shadow of a branch. Closer inspection with the binoculars revealed the missing young one.

An adult plus two young were last seen on the nest by another observer on Sunday, 8 November 2015. I last saw them on Friday the 6th and when I visited the site on Tuesday the 10th, following a hot Monday, the nest was empty and I could not find any of the birds nearby.

Hopefully the two young birds left the nest successfully and are roosting somewhere close by.
Posted by Avithera at 21:03 No comments:

The Royal Spoonbill (Platalea regia) to my mind, and as the species name suggests, is a regal bird with brilliant white plumage and starkly contrasting black face, bill and legs. They are especially elegant in breeding condition when their heads are adorned with white nuptial plumes.

The Royal Spoonbill is moderately common in coastal and near coastal wetlands in Gippsland where birds may be found singly, in pairs, or in small parties and less often in large flocks. From my experience in East Gippsland a large flock would typically contain between 20 and 30 birds, larger flocks up to 50 or 60 birds are rare.

For a number of years now I have been observing Royal Spoonbills in small numbers roosting on the edge of the very large Ibis rookery in Macleod Morass near Bairnsdale and speculating that the Spoonbills may be breeding. This season there have been a larger than usual number of Royals on the edge of the rookery for an extended time so I decided to take a closer look and see if I could confirm breeding.

The Ibis build colonial nest sites by breaking down Giant Rush (Juncus ingens) reed stems to form platforms. The rookery is moved each year to a new location. The Ibis do not nest in Common Reed (Phragmites australis) and Cumbungi (Typha orientalis), the other two dominant aquatic plant stands found in Macleod Morass.

As I walked by a row of large Red Gums a short distance from the rookery at least 20 Whistling Kites and a pair of Swamp Harriers flew out. These and other raptors such as White-bellied Sea-Eagles, have been feeding on Ibis chicks and no doubt earlier on eggs, for the duration of the Ibis breeding event. The chick and egg carnage is quite high, however as there are thousands of Ibis, a majority of young birds successfully reach adulthood.

The Ibis young are now well advanced and have retreated from the more isolated margins of the rookery to form crèches. Adult Ibis continually come and go from the rookery on food gathering forays to the surrounding farm land. Excellent fliers, they are capable of travelling long distances to gather food for their young.

A dozen Straw-necked Ibis have been visiting our paddocks daily for over a month now making a return trip of 28 kilometres from the rookery many times each day.

In all, I counted 50 Royal Spoonbills at the rookery and I estimate there may have been up to another 10 birds out of sight giving a possible total of 60 birds and more may have been away feeding. As mentioned above, 50 or 60 Royal Spoonbills in a loose flock is from my experience a large gathering of this species in our area. All the spoonbills have nuptial plumes. Seven birds looked to be sitting on nests with two birds out on their own and the others located within the main flock of Royals on the edge of a large section of the Ibis rookery.

Approaching the rookery, I was mindful of not disturbing the Ibis and Spoonbills so I waded very slowly in stages in order to get close enough to the Royals for observation and some photos.

The Royals appeared to prefer to construct nests in Giant Rush that is not been packed down into a low platform as the Ibis do.

As I photographed a bird on one of the two isolated nests the bird departed giving me a brief chance to check the nest to see if there were eggs or chicks and thereby confirm for sure that the Royals are breeding. Royals typically lay 2 or 3 eggs.

The bird soon returned to the nest and resumed incubation.

The Spoonbills must share the nesting site with the Ibis. 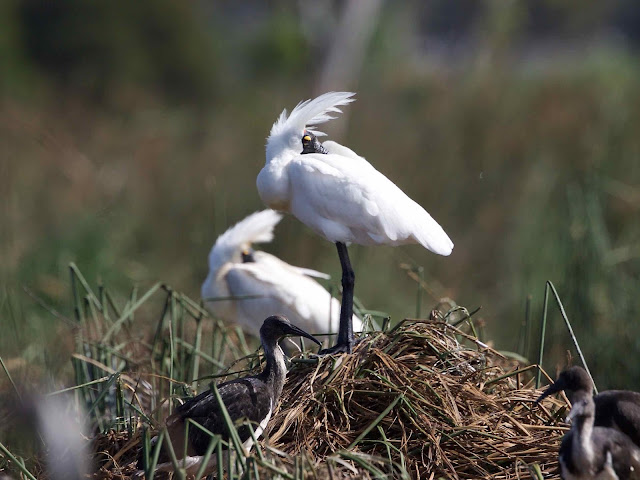 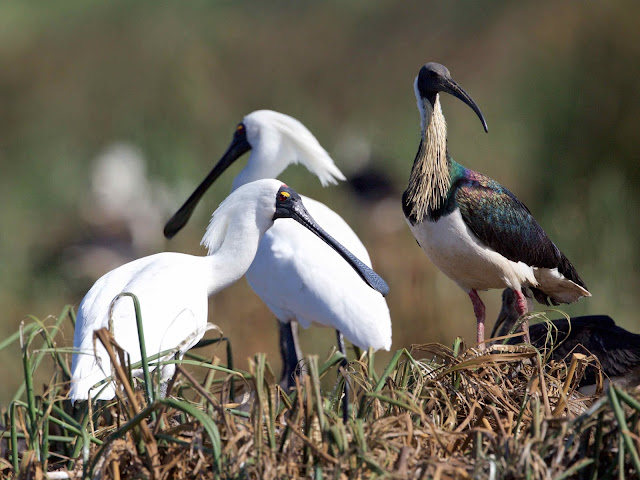 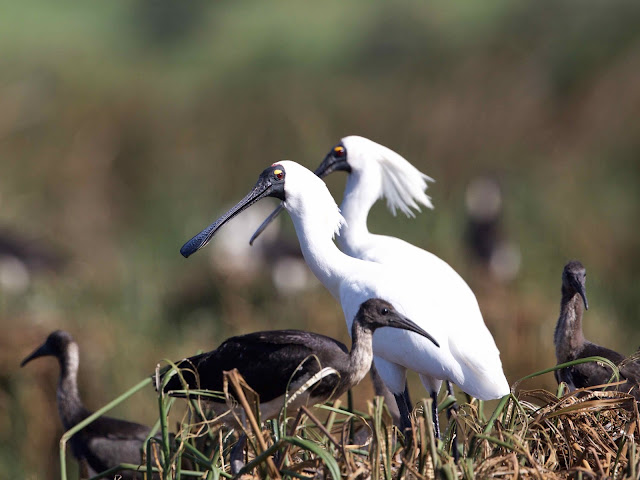 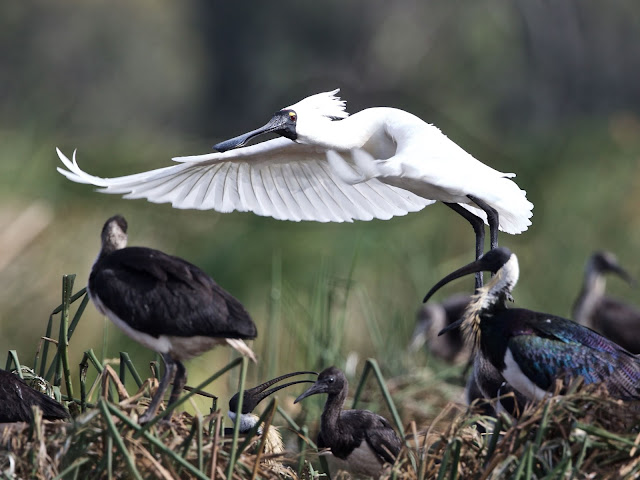 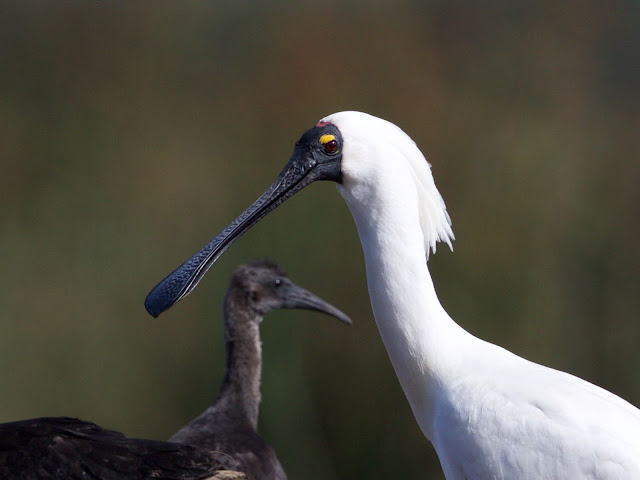 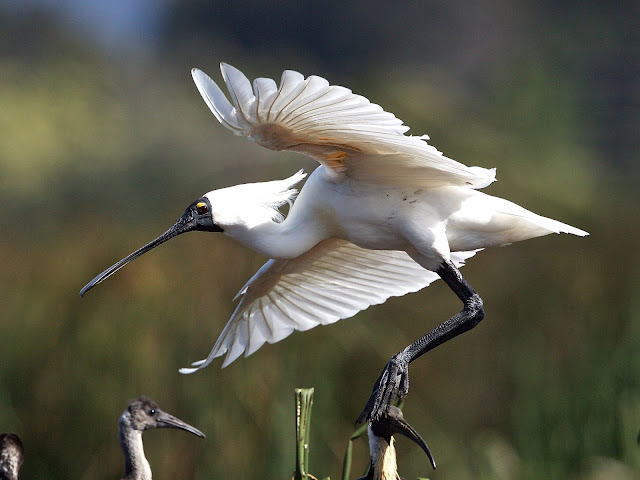 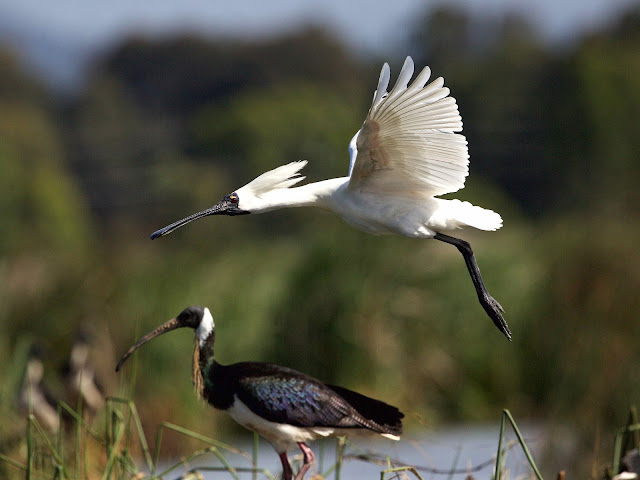 The Spoonbills have started their breeding late in the Ibis breeding cycle, with eggs still being incubated at a time when the Ibis young are well advanced. It is likely that the spoonbill young will hatch out and grow when the Ibis have left the rookery.

Without the protection of a bigger group, the young Spoonbills will be very vulnerable to the raptor predators now gathered in large numbers for the Ibis breeding event. I will watch the Spoonbills with interest and concern and hope they can successfully raise a new generation of Royal Spoonbills this breeding season.
Posted by Avithera at 17:35 No comments: