Australia has three resident grebe species, the Australasian Grebe, Hoary-headed Grebe and the Great Crested Grebe. A fourth grebe, the Little, is a rare visitor (vagrant) to Australia.


Grebes belong to a group of waterbirds known as Podicipedidae, which means “rump-footed” due to their feet being located near the end of their bodies. This feature gives them great swimming ability, both on the surface and underwater.
Unlike most aquatic birds grebes don’t have webbed feet. To aid swimming their feet are lobed – each toe has a stiff flap on either side. Coots also share this very unusual feature. Grebes can only shuffle when walking so it is not surprising that they are highly aquatic animals rarely seen on land. Their nests are constructed from aquatic vegetation in shallow water.


Grebes are rarely seen flying and when alarmed they usually dive and can swim long distances under water to safety. However they are strong flyers and can cover vast distances when required. The long flights are undertaken at night.

Their diet consists mostly of fish and aquatic insects, which are caught underwater.
All three species are found on the Gippsland Lakes, adjoining wetlands and rivers.

The Australasian Grebe prefers fresh water habitats so it is not often found on the saline Gippsland Lakes.

The Hoary-headed Grebe is happy in saline water habitats and can be found at times in very large numbers on shallow sections of the Lakes. Rafts of up to 300 to 500 birds are not uncommon.

The Great Crested Grebe is a more solitary bird and single birds or pairs may be found on the Lakes, often well away from shorelines. From time to time small groups may shelter and rest together when very rough conditions on the Lakes force them into sheltered locations.
This was the case recently when there was a group of up to twenty Great Crested Grebes regularly resting together in McMillan Strait between Paynesville and Raymond Island. They were resting close to the Raymond Island shoreline and so could be approached closely and photographed from a vehicle. It was a good opportunity to get some photos of this species and spend some time observing them at close range.
There were 14 birds present the morning I paid them a visit. They spent most of the 40 minutes I watched them sleeping with their heads on their backs and their bills tucked under their necks. While they gave the appearance of being asleep I noticed on close observation that their eyes were often open and that they were paddling to maintain their positions against the wind and currents.
Now and again one would wake up and undertake some preening, giving me the opportunity to get some shots of this beautiful bird. They have long necks and dagger bills with a sharp point, no doubt an effective weapon for catching fish. Their head is particularly stunning, sporting a dark crest and black tipped chestnut ruffs, which can be held flat or erected for displays of aggression and during their elaborate and extraordinary courtship rituals.
Males and females are very similar in appearance. The females are slightly smaller. Sub adults or immature birds take time to develop the full colour on the crest and ruffs.
Here are a few more shots of the Great Crested Grebe. 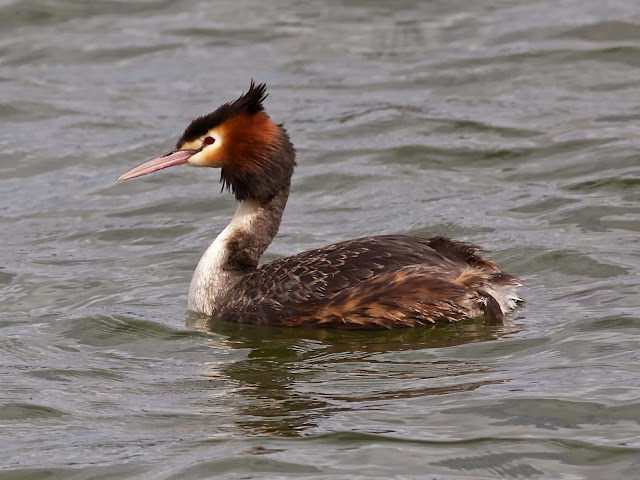 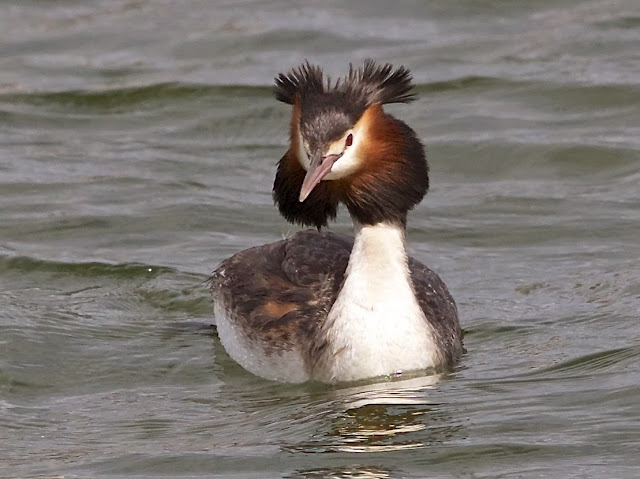 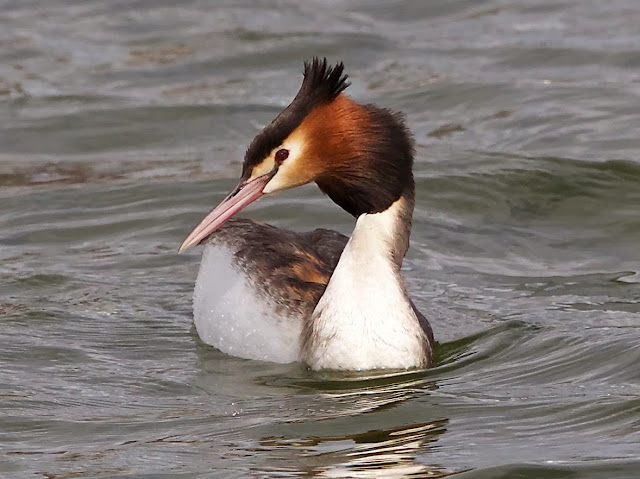 Great Crested Grebes are not always present on the Gippsland Lakes so when they are here and there is an opportunity to see them up close it is not to be missed. Oh and how did I know the birds were there? A good birding friend who lives on Raymond Island let me know and even provided a cup of tea (but no biscuits!) – thanks RM.
I need to find a breeding pair and get some courtship photos now?????
Posted by Avithera at 18:52 2 comments:

BirdLife East Gippsland, a branch of BirdLife Australia, holds two birding camps each year, one in autumn and one in spring. This year the spring camp was based at Marlo, a small town on the Victorian coast at the mouth of the Snowy River.
See: http://www.birdlife.org.au/locations/birdlife-east-gippsland
or:   http://www.birdlife.org.au
The camp was organized and managed by Merryl and Ian Wright, and activities were led by our expert local birding guides, Marlo residents and members Jacquie and Len Axen.  From Monday 14th  to Friday 18th October, twenty-nine birders attended with most staying in a caravan park at Marlo.
A wide diversity of rich habitats was visited over the four days including the Orbost Wastewater Treatment Lagoons, Snowy River Estuary and adjoining wetlands, the coast with both sandy beaches and rocky headlands at Cape Conran, coastal woodlands and forests, heathlands, the Yerrung River Estuary and the Cabbage Tree Palms Reserve.

For each of the sites visited, the bird species and the number of birds were recorded. This data is sent to BirdLife Australia for inclusion in the Atlas database. A total of about 136 bird species were recorded over the four days, a good total given the highly variable and at times wild and wet weather with very strong winds and big seas along the coast.
So the conditions were not always ideal for bird photography, however the bird photographers in the group were afforded some good opportunities over the four days.
Here are a few of my shots from the camp.
Striated Thornbill:
A small group of thornbills in coastal woodland tested our identification skills. The birds turned out to be Striated and not Yellow Thornbills.
Rufous Songlark:
There was a further identification challenge with Australasian Pipits and Rufous Songlarks present at the Orbost Treatment Lagoons with a further possibility of an introduced Eurasian Skylark. The Rufous Songlark in the photos below was calling in flight between rests on fence posts. This bird finally settled long enough for a close enough approach to get a couple of shots, with one flight shot. The flight shot was captured by waiting for the bird to fly from the top of a fence post.
Caspian Tern:
A Caspian Tern entertained us on the Snowy River Estuary at Marlo one afternoon by diving and catching a good sized fish. It then flew around with the fish until it decided to join two Pied Oystercatchers on a sandy beach close to us where it dealt with the significant task of arranging the fish head in its mouth before it was swallowed whole. When a large fish is caught and can’t be swallowed when the bird emerges from the dive at the water’s surface, other birds often give chase in the hope of stealing an easy meal. In this case the Tern was safe from the Oystercatchers, as large fish are not part of their diet.
White-bellied Sea-Eagle:
There are good numbers of Sea-Eagles along the Gippsland coast and we saw several birds over the four days, some sub-adults and others fully mature. The bird in the following shot, a sub adult, was captured as it flew over French’s Narrows, at the eastern end of the Snowy River Estuary.

Horsfield’s Bronze-Cuckoo:
We heard many Shining and Horsfield’s Bronze-Cuckoos in various habitats over the four days. They are hard birds to see and even harder to photograph. The one in the following shots was hunting for caterpillars in heathland at the back of the primary coastal dunes near French’s Narrows. Also in the same area, and on one occasion in the same bush, were a pair of Striated Fieldwrens and pair of Superb Fairy-Wrens and nearby, a White-fronted Chat.


Striated Fieldwren:
We managed to find several pairs of Striated Fieldwrens in the heathland between the Snowy River Estuary and the primary coastal dunes east of the Snowy River entrance. They were hard to approach and reminded me of grasswrens the way they ducked into dense low shrubs and sometimes ran between clumps of vegetation.
Spotted Harrier:
While trying to photograph Striated Fieldwrens I noticed a raptor approaching from the east. It flew low, closely following the undulating dunes, often disappearing from view as it drew closer. It finally came into view and within camera distance, so close to me that I only had a few seconds to get one shot and see that it was a Spotted Harrier before it was past me and flying into the sun.

These birds have a characteristic hunting flight style where the bird appears to almost float weightless on outstretched wings using the slightest breeze with very few wing beats. The broad dark brown tipped flight feathers obvious in the photo may partly explain why this bird gets such good lift with seemingly so little effort.
Sharp-tailed Sandpiper:
A lone Sharp-tailed Sandpiper still partly in breeding plumage and probably not long back from the northern hemisphere breeding grounds was found feeding by a small creek outlet pool at the top of the Sailor’s Grave beach, East Cape Conran. It allowed fairly close approach as it fed, no doubt ravenous after a long trip. On the beach nearby were three Sooty and one Pied Oystercatcher, a lone Hooded Plover, a couple of Pacific Gulls and a small party of Little Black Cormorants resting on the beach.
Musk Lorikeet:
In the caravan park, noisy groups of Little and Red Wattlebirds and Rainbow and Musk Lorikeets fed and fought over nectar-rich blossoms in the Callistemons.
Thanks to Merryl, Ian, Len and Jacqui, we all thoroughly enjoyed another successful BirdLife East Gippsland birding camp with good company, a scenic location, many types of habitat and plenty of bird species.

Looking for the Hooded Robin in Gippsland (Victoria)

So was it a successful trip? I think it was. We found, in Gippsland, large areas of what I regard as very good dry woodland habitat suitable for robins and in particular Hooded Robins and in addition we actually found three Hooded Robins.
I am confident this area is an important stronghold for Hooded Robins in southern Australia, south of the Great Dividing Range. If habitat and conditions in greater Gippsland were to become suitable once again for the Hooded Robins, this population is a potential source for re-colonisation of an area where they were once found but are now absent.
We also enjoyed exploring close to home a unique area with rugged mountain scenery, an iconic river, a very large and mostly untouched dry woodland and a rich diversity of birds and other wildlife.
We plan to return to the area again later in spring to look again for Hooded Robins and see what other birds are around compared with the species we recorded in early spring.
Posted by Avithera at 18:03 3 comments: