White-necked Herons (Ardea pacifica) are nomadic and can be found right across Australia wherever there is water, including the arid inland. They also have regular winter-spring movements in some regions, so are also migrants. Following good rains across the arid interior, they will exploit ephemeral water. However during prolonged and widespread inland droughts they will head to coastal areas to take refuge.

As a consequence, White-necked Herons come and go from East Gippsland as do many other waterbird species. They were absent from East Gippsland over the past summer however some birds returned during autumn. I recently found one hunting for small fish in the Sale Common wetland.

To start the photos in this post I have included some from Ormiston Gorge in the West MacDonnell Ranges NT to show the large range of habitats exploited by the White-necked Heron.


Returning to Sale Common:
I was not far into the wetland when I came across a Great Egret (Ardea modesta – the same genus as the White-necked Heron) hunting among Giant Rush (Juncus ingens).


Further along I came across an adult White-necked Heron in non-breeding plumage stalking along the water’s edge and watched it capture several very small fish all about 2 centimetres long at most.

At this point, the Great Egret which I had seen hunting earlier some distance away and out of sight of the White-necked Heron, suddenly appeared.

About 100 metres further along the same stretch of water a White-faced Heron was hunting small fish. The fish looked to be about the same size as the ones the White-necked Heron was taking.


The 45 minute stroll in a small section of Sale Common yielded plenty of action and interest including the resolution of a minor territorial dispute.
Posted by Avithera at 11:58 No comments:

The beautifully coloured Red-kneed Dotterel (Erythrogonys cinctus) is confined to mainland Australia and southern new Guinea with vagrant records in Tasmania and NZ. A nomadic shorebird, found mostly in freshwater habitats, they turn up on the Gippsland Lakes wetlands on a frequent but irregular basis.

They are a very distinctive shorebird – I like the apt description in the Pizzey & Knight Field Guide “black hangman’s hood” – and are unlikely to be confused with any other shorebird seen in Australia.

Recently I found about eight Red-kneed Dotterels feeding in mirror still shallow water at the sand islands in Jones Bay (on the Gippsland Lakes south of Bairnsdale). With the sun low in a late June clear blue winter sky and Jones Bay behind me reflecting and amplifying the light, the Dotterels were bathed in an abundance of red-end-of-the-spectrum light giving a saturated look to the colour of some of my photos. Amongst several birds in the photos some show black hoods and breast bars and others look brown. I am not sure if this is due to the light angle or if there is a real colour difference due to maturity of the birds? 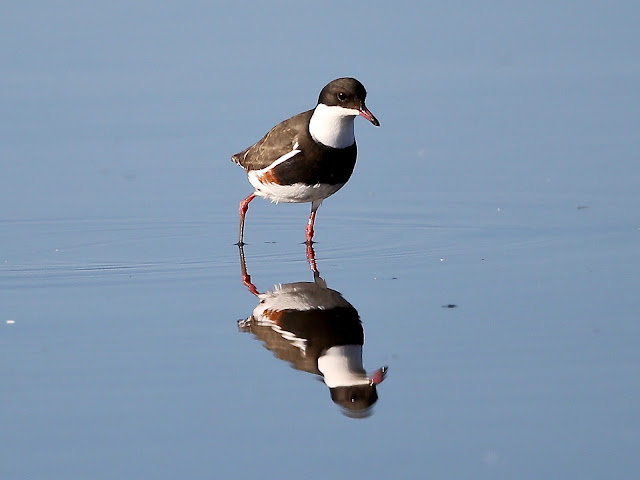 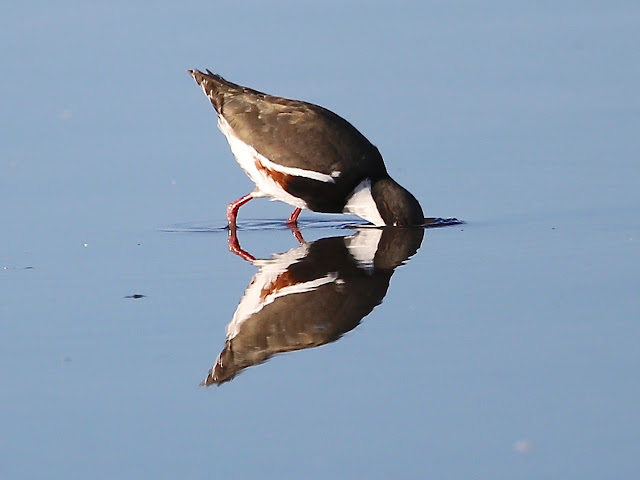 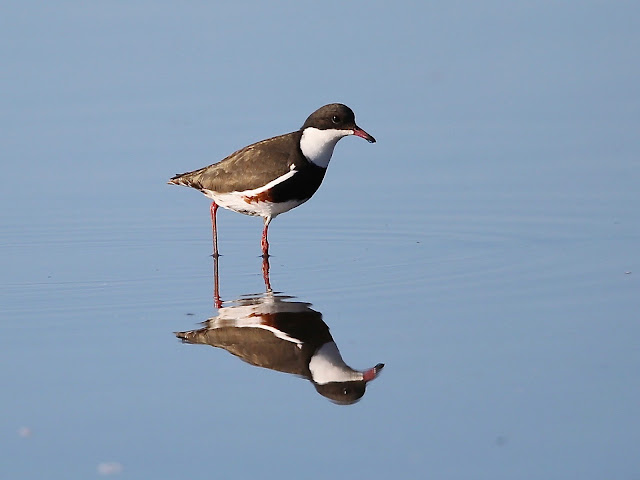 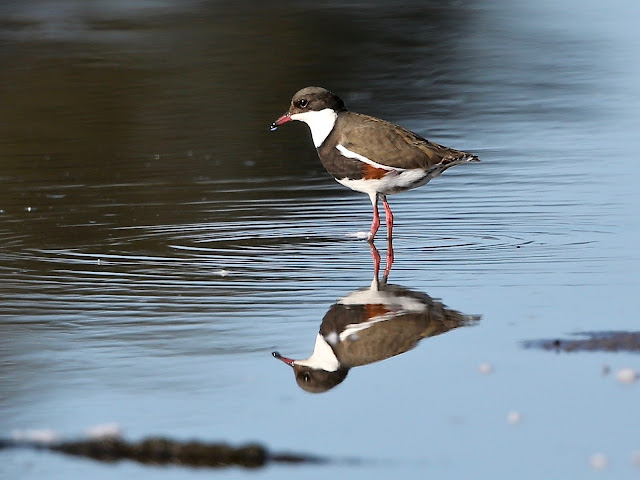 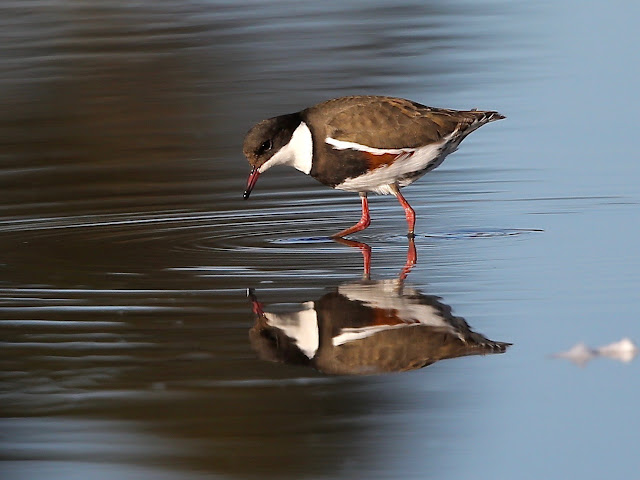 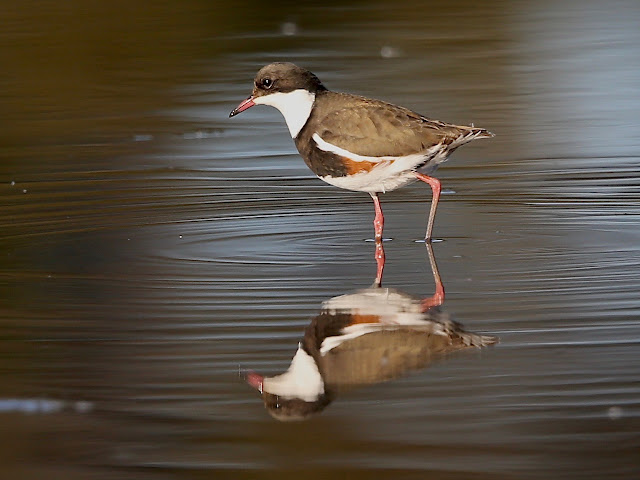 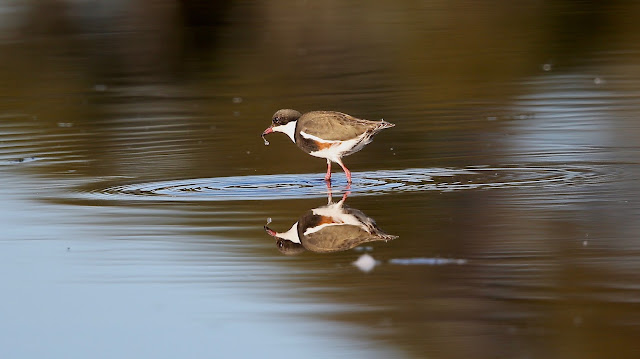 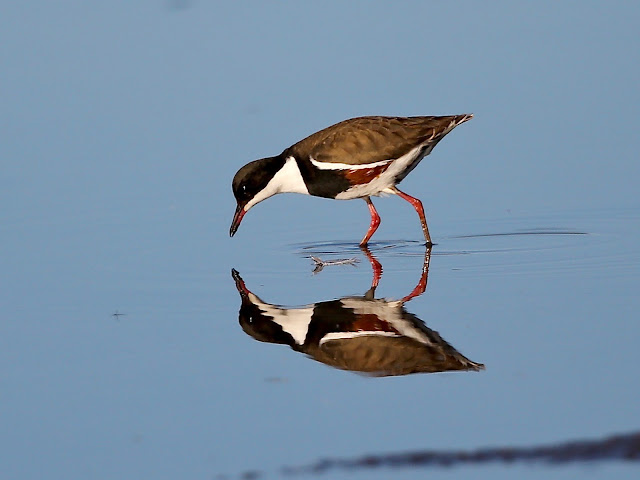 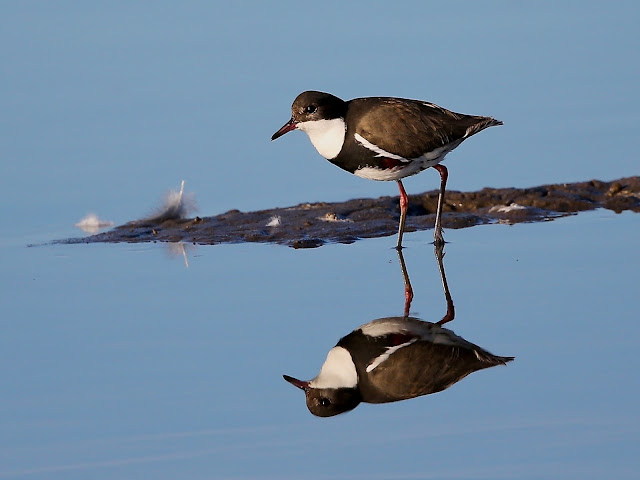 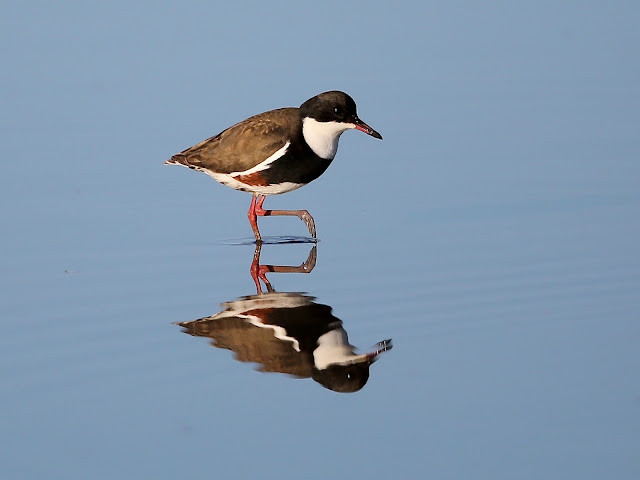 A close portrait to finish. 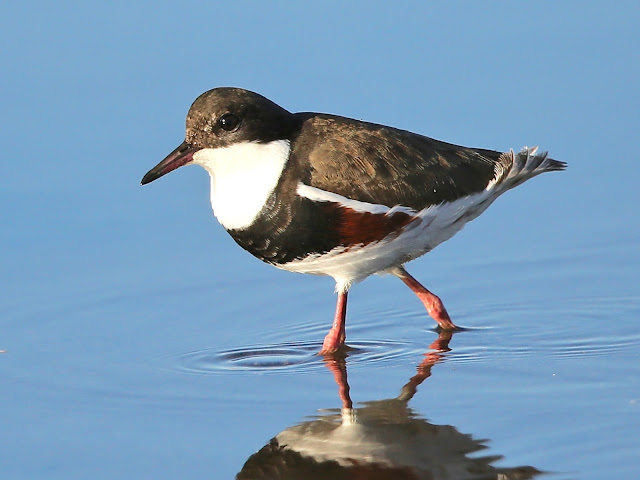 Posted by Avithera at 13:17 No comments:

For several years now we have had a resident pair of White-faced Herons (Egretta novaehollandiae (1)) and each year they nest in a large Forest Redgum (E tereticornis) on our property. The breeding season in SE Australia is normally from September to December and while it is only mid-June now, the pair are both in breeding plumage and are keeping close together as they feed in our paddocks. They are preparing to breed.

The breeding plumage consists of long lanceolate nuptial plumes which are silvery grey on the mantle and scapulars and chestnut on the breast.

One bird is slightly, though noticeably, larger than the other. In the field guides which I have consulted there is no mention of a size difference between the sexes and as the sexes look similar I am unable to say which sex the larger bird is.

I waited a long time hoping to get a side by side comparison photo of the pair who mostly foraged apart.

Herons, including the White-faced, have several highly modified patches of feathers that produce powder-down - a talcum-like powder that is used for grooming and cleaning feathers. Some other species of water birds have powder-down patches as do some non-water bird species such as wood-swallows for example. The powder gives the plumage a powdery appearance and reduces the fine feather detail giving a slightly blurry appearance. I first noticed this with some woodswallow photos that I thought were out of focus until I learnt about powder-down.

The White-faced Heron is easily our most well-known heron being both abundant and widespread and can be found from coastal habitats to far inland, wherever there is water. The pair on our property have access to a small farm dam and the Nicholson River nearby, and suitable trees to nest in, however they spend a lot of their time foraging for food on grassy paddocks rather than in shallow water.

White-faced Herons are “habitat generalists” and can be found hunting fish in water or worms in a paddock as they have been doing at home over the past week or two. Pretty much any vertebrate or invertebrate animals they come across that are small enough to swallow are potential food for White-faced Herons.

I have been coming and going on the tractor through their favoured feeding paddock recently and when I do they usually fly to a nearby fence post and when I have passed by they return to the paddock to forage.

Compared with some egrets and herons that have adopted the “stand-and-wait” approach White-faced Herons are more active hunters. The hunting technique used in our paddock is “stealthy stalking” and when a food item has been spotted the long and sharp dagger-bill is thrust out at lightning-speed to catch the item in a pincer grip. The sharp bill can also be used to spear larger prey such as fish.

All herons have a special hinge mechanism at the sixth vertebra which facilitates the lightning fast, forward thrusting movement of the neck, head and dagger bill when seizing or impaling prey.

With the camera supported on the top of a fence post I watched the pair stalking through the relatively short but thick grass searching for earthworms. Their eye sight, and perhaps hearing, must be exceptionally good to spot earthworms on or partially under the ground in dense grass. Once a worm was spotted and their gaze was fixed on the hapless prey, the lightning fast strike almost always resulted in a worm capture. The worm was swallowed so quickly I only managed to capture a couple of photos showing the worms in the bill.

Herons and the closely related egrets are beautiful and elegant birds – we are very fortunate to have a resident breeding pair of White-faced Heron virtually in our backyard.

(1)  Note regarding the name herons and taxonomy.

The scientific name for the White-faced Heron (Egretta novaehollandiae) shows it is in the genus Egretta and therefore is an egret and not a heron?

The names heron and egret have no taxonomic relevance with the vernacular name egret being used for white birds and heron for the non-whites. A look at a copy of the taxonomic list from Christidis and Boles 2008 below shows the Eastern Great, Intermediate and Cattle Egrets in the heron genus Ardea and Pied and White-faced Herons in the genus Egretta.

I guess Bitterns, Egrets, Night Herons and Herons can all be regarded as herons, or should that be egrets?

Copied from Christidis and Boles 2008

Posted by Avithera at 12:48 No comments: