Regarding the Lewin’s Rail, the Morcombe field guide states “Secretive and difficult to sight even momentarily in the swamps where it forages; tends to come into the open less than other rails.”.

To my delight I found a Lewin’s that contradicted the description in Morcombe. This bird foraged in the open on sand under mangrove trees on a tidal estuary and it allowed close approach without any sign of shyness.

It was late afternoon and the low sun angle meant the bird was receiving both direct light and light reflected off the adjacent water – a double dose of light. The light was filtered through extra atmosphere because of the low sun angle, plus fuel reduction burning in hinterland state forests meant smoke was also impacting the incoming light spectrum.

Hence the following photos show very rich and intense light bordering on the unnatural, although this is how the bird looked – the colour is not a product of digital enhancing.

The photos were captured as the bird foraged on sand, pecking up morsels revealed by a falling tide and sometimes driving its stout bill deep into the wet sand. 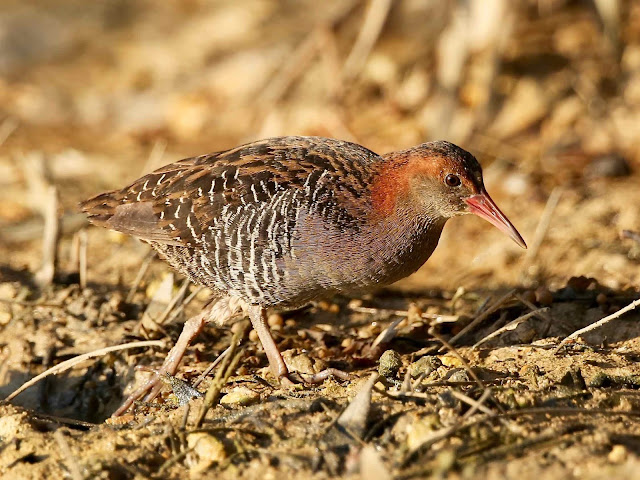 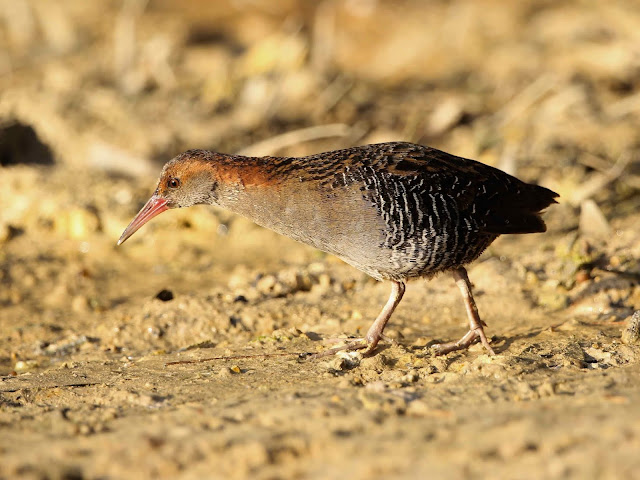 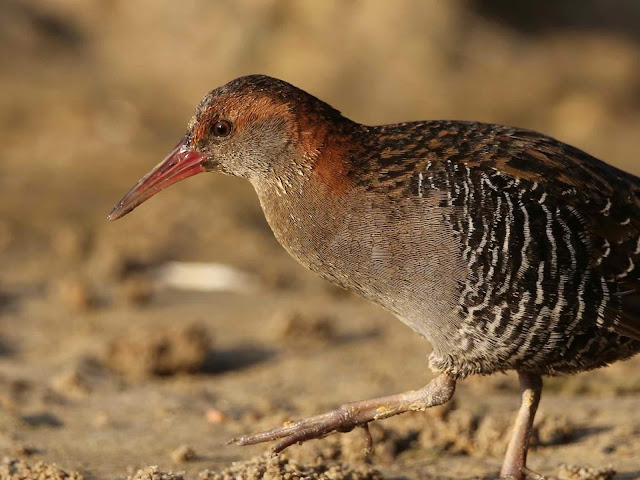 Posted by Avithera at 09:18 No comments:

There are many attractions, delights and rewards when spending time in the field with bins and camera looking for birds and whatever else the natural world may reveal on your walkabouts. However, I find one of the great pleasures of birding is the fact that you never know what might turn up. While some birding and photography is planned, and targeted, the reality is that much of what is captured by the camera comes by shear chance, though as a wise friend once quoted – “chance favours the prepared mind”.

A chance encounter with a pair of Black-shouldered Kites recently came my way when we were visiting Yuraygir National Park in northern NSW. On a short walk from Station Creek camp ground to the coast, the path crosses sand dunes dominated by grass and low densely growing coastal wattle plus some groves of Casuarina trees. While trying to photograph a very wary Tawny Grassbird in the wattles (without much success) I spotted in the distance two white birds perched in the top of a large Casuarina tree standing alone beyond a grove of Casuarinas. At first I thought they were White-headed Pigeons but a quick check with the bins revealed they were Black-shouldered Kites.

Given their position it looked like I could use the grove of trees as cover to work my way close to them with the sun at my back – as a bird photographer you become very aware of sun angle. I have found most raptors including Black-shouldered Kites very wary of people on foot and their FID (flight initiation distance) is usually quite long and certainly longer than the distance required for a good photo. Sometimes however if the raptor is preoccupied, for example it has a prey item it is eating, then you may, with care, be able to approach closer than the usual FID.

So, I took the following distant photo of the pair perched in the top of the Casuarina and then set off through the grove. While the grove provided some cover, I have no doubt the pair of Kites knew I was there and followed my progress towards them.

By stages I stopped and took a few photos and then slowly worked my way closer. Given the sun angle I headed towards the bird on the right-hand side of the tree. When I reached the end of the grove of trees and their scant cover the birds were still sitting. I then moved beyond the grove out into the open and continued to approach the right-hand bird – by now the bird to my left was out of sight. At this point I was surprised to get so close without them taking flight. Until this point I had been on grass but now I could not approach further as the way ahead was thick wattles – in any case this was close enough and any further and I would have been taking photos looking up at a steep angle.

I took a few shots of the bird and made some adjustments to camera settings as I went. The bird seemed to be comfortable with my presence and spent time looking around as well as at me – this seemed a little unusual as most raptors would have departed by now. 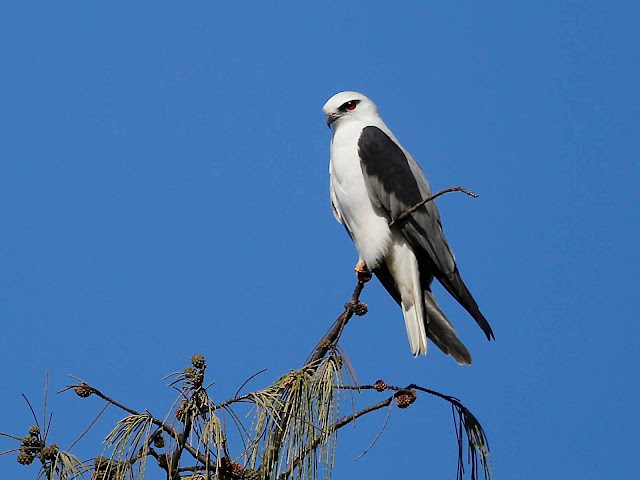 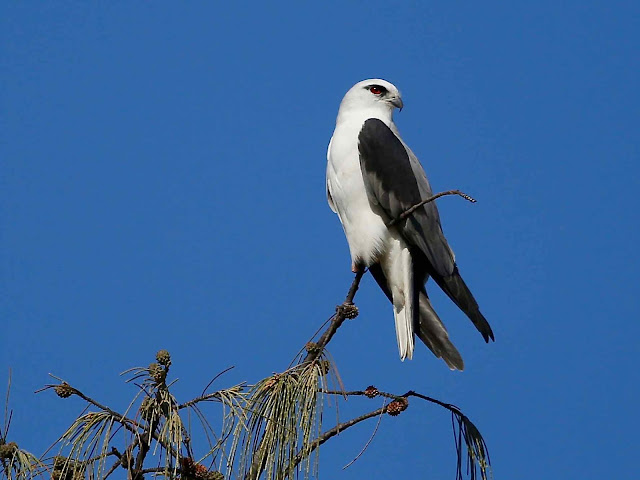 I decided it was time to leave the bird in peace but thought I would give it another few minutes in case something happened or it took off and I could get a flight shot – it was just a hunch that I should be patient and stay a little longer.

The bird began to call. 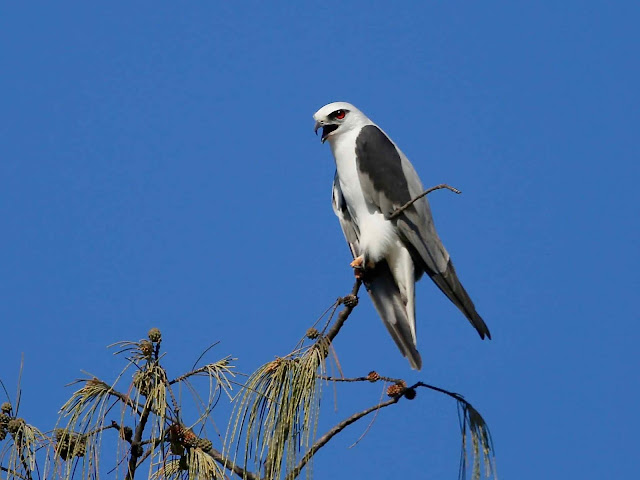 I sensed something may be about to happen! And it did – the other bird entered stage right calling as it came. 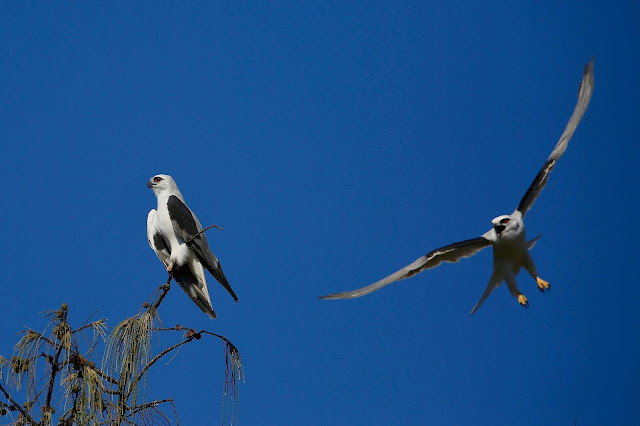 From here on the action unfolded rapidly and all I could do was try and capture some photos (one shot at a time – the high speed continuous shooting function was not selected) with no time to check and change camera settings. I have not added any captions to the following sequence of photos – the photos can speak for themselves – they are in the order taken. 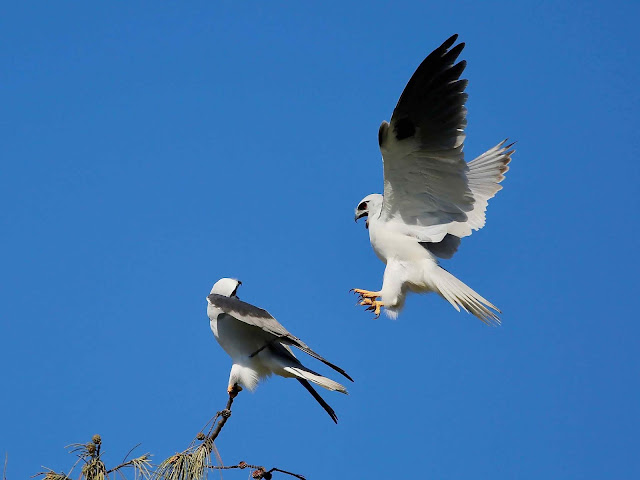 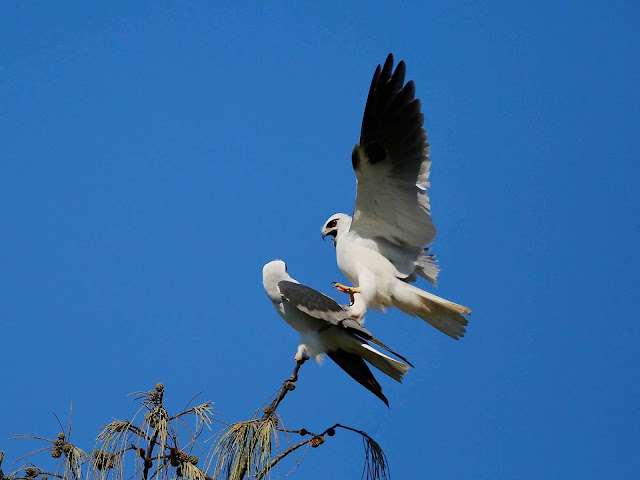 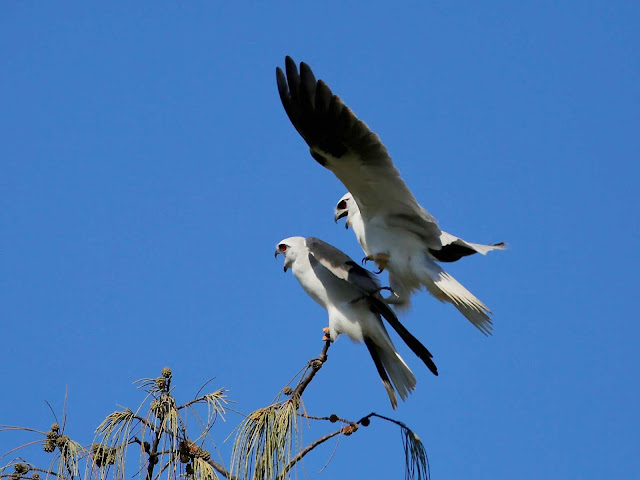 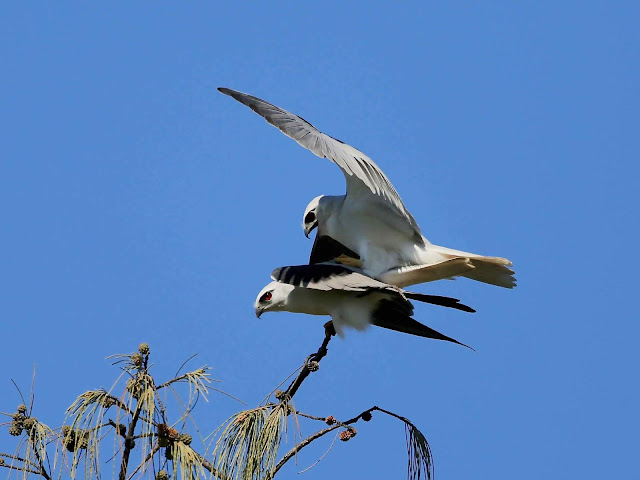 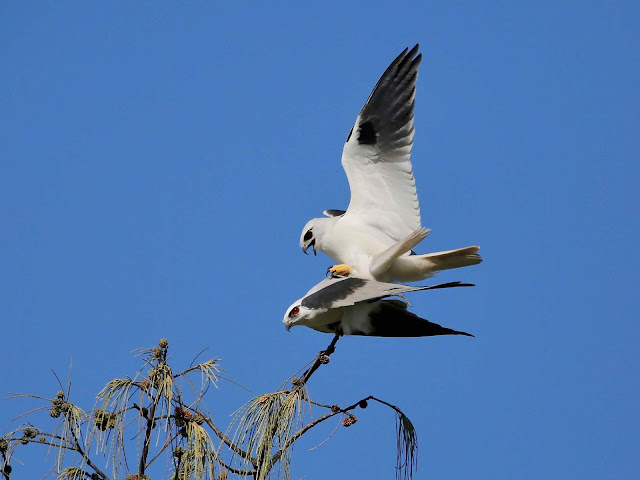 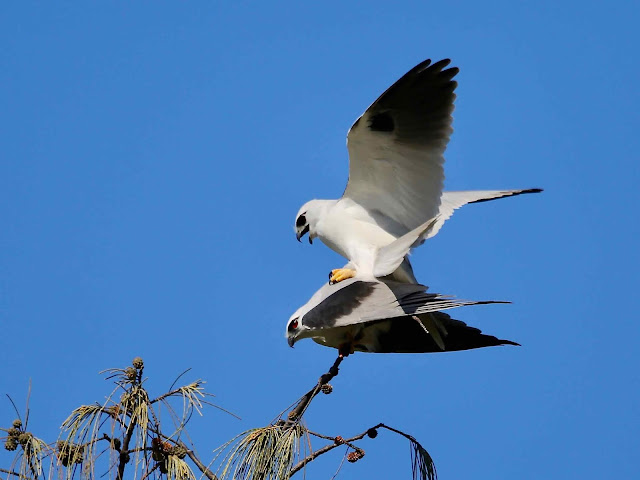 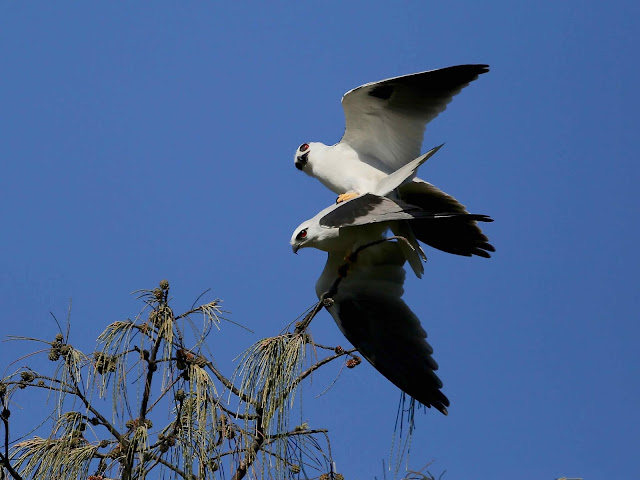 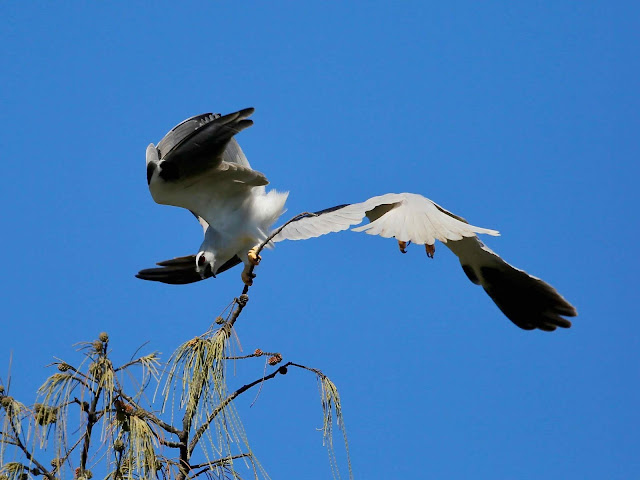 As the male dismounted and flew off, the female pitched forward and almost overturned on the flimsy twig she was perched on. The female then seemed to regain her composure rapidly. 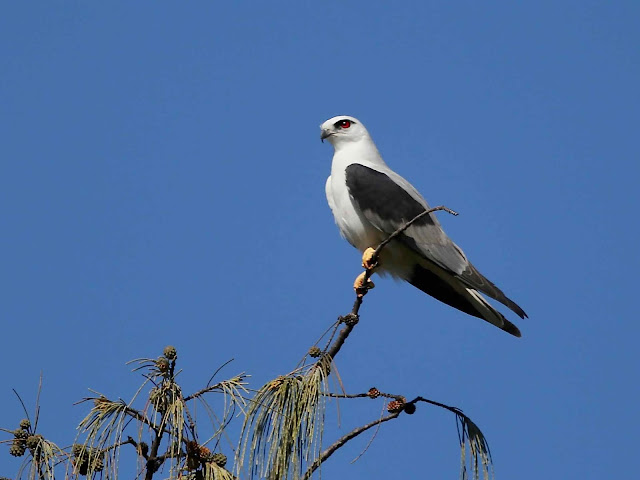 She then fluffed up her feathers and vigorously shook herself. 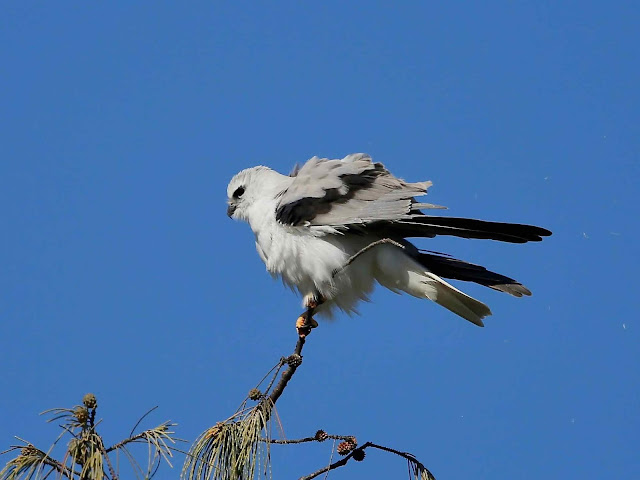 She then settled her feathers back in place. 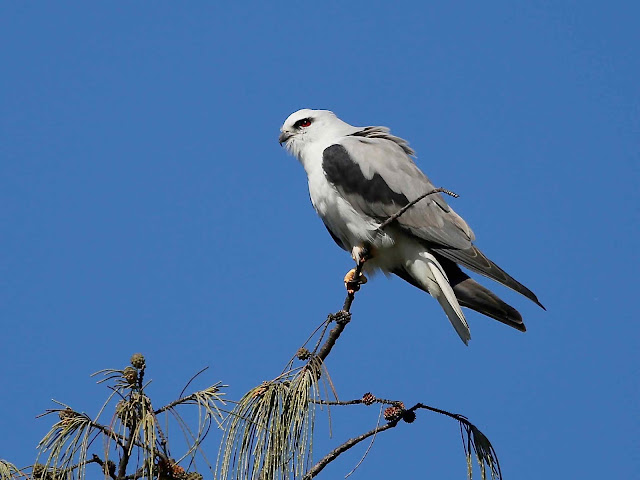 And a moment later she was gone leaving me alone with my emotions – what an incredible experience and privilege to witness up close this intimate act between two beautiful wild birds of prey. Some birders have referred to these chance and very special encounters as experiencing grace, the receiving of a precious gift that you could never arrange.

Looking back it now seems the birds allowed my close approach because they were preoccupied with mating. My hunch something was unusual and my decision and patience to wait a little longer paid off.  It would have been easy to assume nothing-to-see-here and move on. Nature of course runs at its own pace – seeing amazing things often requires us to slow down, wait and watch.

And of course, luck plays a big part – if the bird on the right-hand side - which I headed for because of the sun angle - was the male, then the outcome would have been completely different.

Posted by Avithera at 13:30 No comments: