In East Gippsland, Little Egrets (Egretta garzetta), are usually encountered as solitary birds (not flocks) and while they may employ the stealthy stalker approach when hunting, they are often seen actively dashing about after food.

I encountered a bird hunting in shallow water at Lake Tyers recently with good late afternoon light. The bird was in breeding plumage sporting two long plumes from the nape and filamentous feathers from the mantle, scapulars and upper breast. Normally the bare facial skin is yellow, however when courting this may briefly change colour. The bird in the photos has pink and bluish coloured facial skin which I have not seen before.

The Little Egret looked to be catching tiny fish as seen in two of the photos. 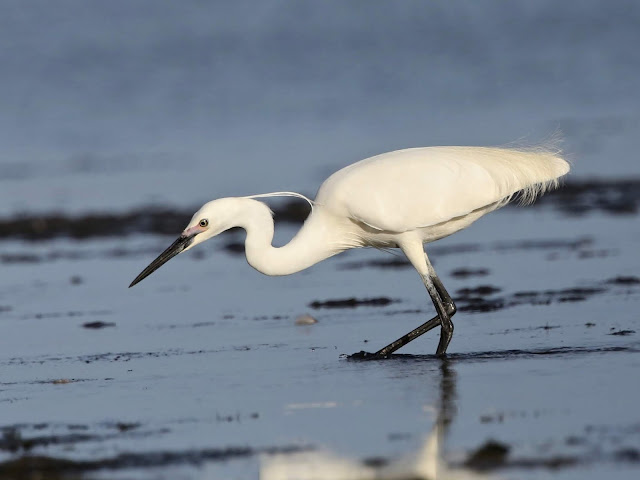 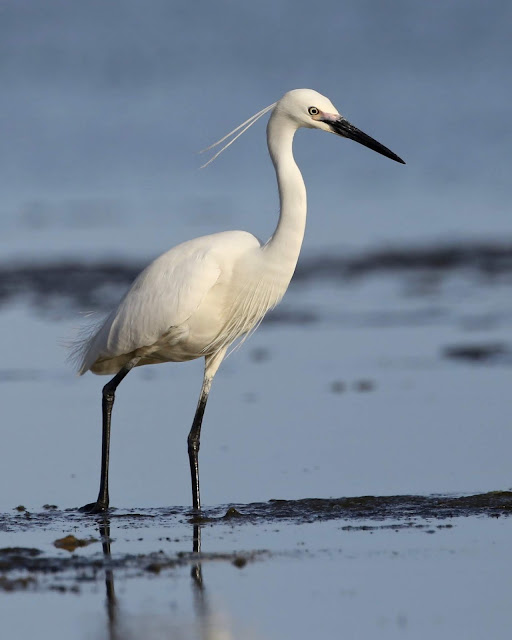 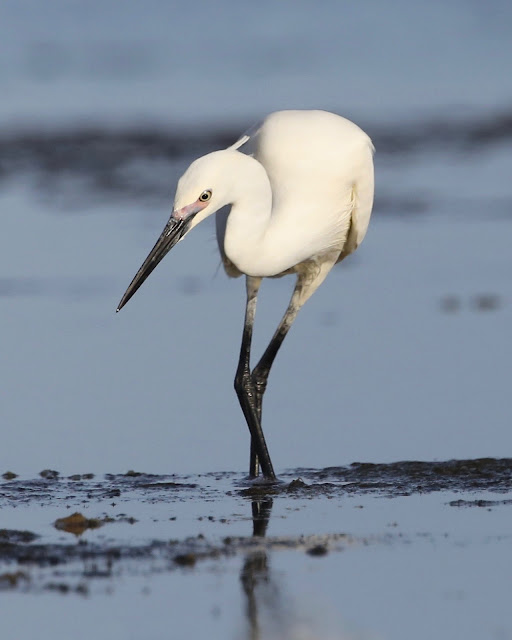 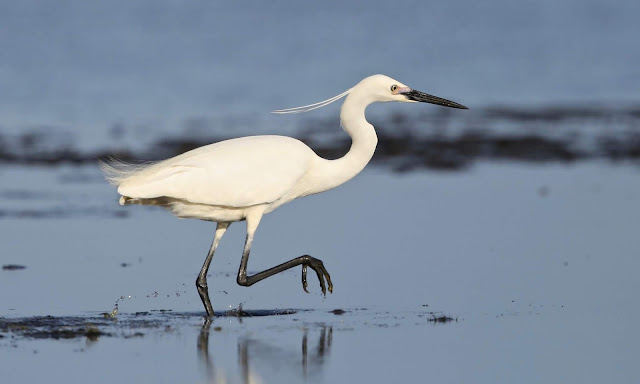 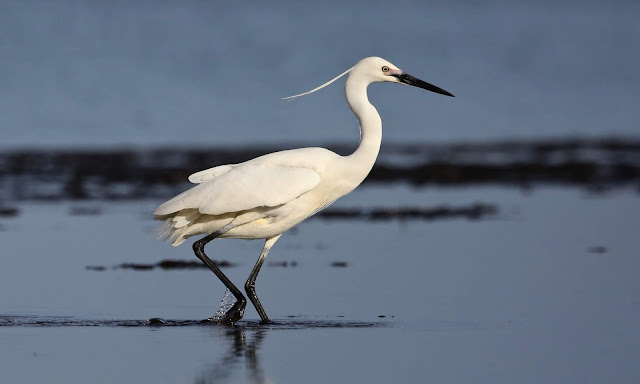 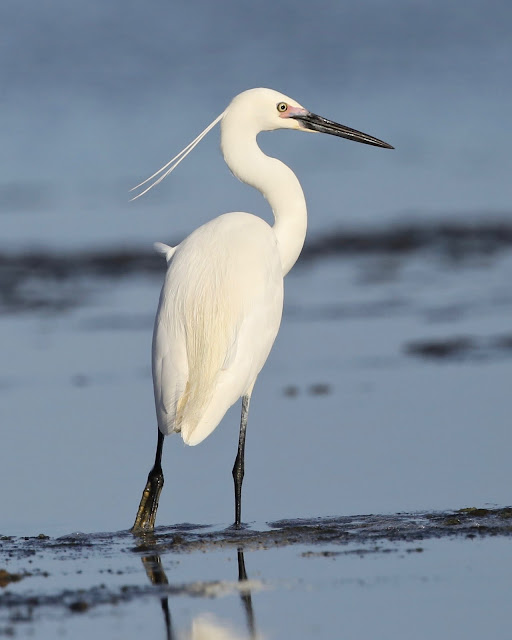 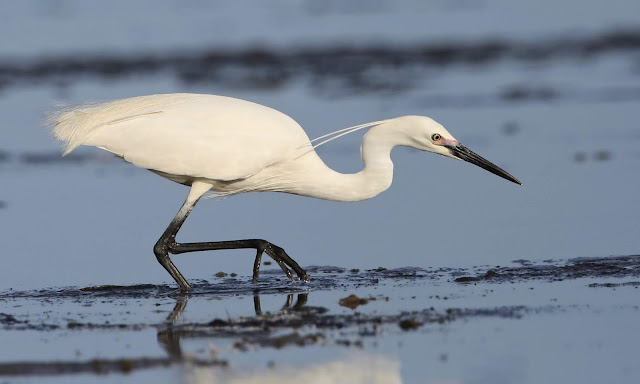 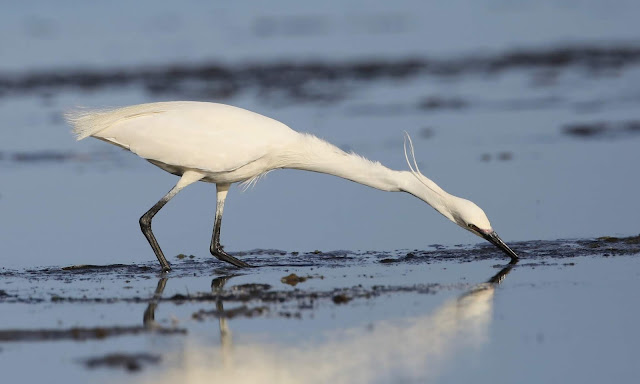 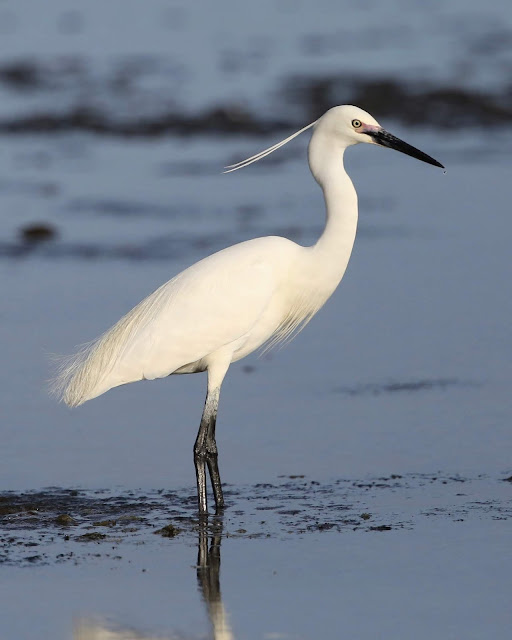 Given the condition of this bird’s plumage and facial skin it may be breeding, however I am not aware of any breeding records for this species in East Gippsland?

Posted by Avithera at 10:52 No comments:

While monitoring an Australian Pelican breeding colony on the Gippsland Lakes recently we observed a pair of Pacific Gulls taking eggs from a Black Swan nest next to the Pelican colony. A good number, perhaps 50-60, breeding Black Swans were sharing the small island with the Pelicans. One of the Pacific Gulls was also seen with a Pelican egg, however while the egg came from the breeding colony we did not see it taken.

The following notes from “The Shorebirds of Australia – The National Photographic Index of Australian Wildlife” describe the Pacific Gull well in the context of this post:

“…a massive bird, almost as big as a Southern Skua, whose piratical habits it shares. Although its main food is fish and shellfish, it preys on other nestling seabirds, especially during the breeding season. Like most gulls it also scavenges on offal and refuse left by humans.

Like the Herring Gull of the northern hemisphere, the Pacific Gull has a curious habit of dropping turbo shells and other molluscs and limpets from a height onto rocks in order to break them open.”

I noted that each time it was only one of the pair of Pacific Gulls taking an egg as each time the other bird looked on when it could easily have taken an egg itself. Each time an egg was taken the bird flew to a narrow sand spit running south from the breeding island where it dropped the eggs from a height to break them. One egg had to be picked up and dropped a second time to break it.

The pair then consumed the contents of the eggs, though not in peace as a White-bellied Sea-Eagle and later a Forest Raven came in to share the eggs.

It should be noted that the Gull was not taking eggs from a defended nest. Black Swans are formidable foes when protecting their nests and young. The Swan nest looked to be abandoned – possibly because it was too close to the breeding Pelicans. Unattended nests will soon be raided by scavengers in this way – a natural form of population control. Also, as mentioned in the note above, nestlings will be taken if the opportunity arises.

The pair of Pacific Gulls at an abandoned Black Swan nest. Note the Pelicans and chicks in the background. 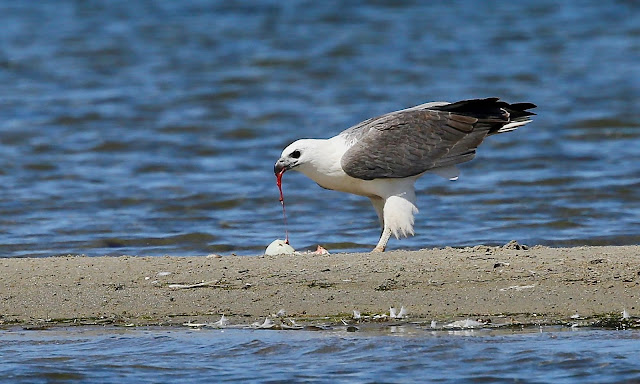 There is often interesting activity to observe around breeding colonies, however great care is required to ensure the breeding birds are not disturbed. In this case, we were observing from a boat and a telephoto lens was used to capture the action. Also, the monitoring activities have the appropriate approvals.
Posted by Avithera at 16:50 1 comment:

Anyone fortunate enough to have observed a male Musk Duck at close quarters, particularly while displaying, will most likely agree this is one very strange duck. In the Pizzey & Knight Birds of Australia guide Pizzey starts his notes on the Musk Duck with “Male larger. A very strange duck.”

The Musk Duck is a diving duck and spends most of its time on and under the water – it even sleeps on water. It is supremely adapted to a life on the water, catches its prey by diving and per Michael Morcombe’s guide, “occasionally emerges onto land, where it waddles clumsily”.

Recently we encountered a lone male Musk Duck on Lake Vancouver near Albany in WA. The small lake was a deep fresh water marsh, well vegetated around the margins, a habitat preferred by Musk Duck, though they can be found in a diverse range of habitats including salt water - estuaries, lakes and even in the sea off sea-beaches.

There were no other water birds on Lake Vancouver – from my initial scan of the lake I thought there were no birds until the Musk Duck emerged from a dive.

At first the bird was very busy diving for food when it spent long periods submerged and only briefly appeared on the surface. We observed the bird from a metal clad timber hide built out over the water and fringing vegetation. I was hoping the bird might come closer for photos and had reached the point where I thought this was unlikely. Then a lone Pacific Black Duck flew in and landed across the lake from us. The Musk Duck immediately made its way to the Black Duck which departed with what seemed indignant calls as the aggressive Musk Duck saw it off with a very impressive and loud splash of water.

We decided to wait and observe a little longer. The Musk Duck then swam along the far shore and disappeared into a small embayment in the dense fringing reeds. After several minutes, we thought that was it for our session observing the duck, however he then emerged again and swam back towards the hide, and for us most interestingly the bird’s behaviour had changed from foraging to displaying.

The male in display fans its stiff pin-like tail feathers forwards over its back and expands the undertail-coverts like a powderpuff and with the bill raised and bill-flap expanded the bird throws loud foot-splashes while making a k-plonk like call that is far carrying. In the hide we at first thought the k-plonk call was coming from a frog under the hide. There were two species of frog calling. However, watching the Musk Duck closely, it was clear he was making the k-plonk sound which was like a very loud drop of water in a deep well. The sound was perfectly the same each time making us think the bird must be making the sound with its throat and not by splashing with its feet which you would think would result in a variable sound. It was hard to believe the sound was coming from the duck some 80 metres or so away and not from right under the hide, it was so loud and clear (1).

In addition to the k-plonk sound and dramatic foot splashes the Musk Duck male in display also utters grunts and a shrill far-carrying whistle.

As the Musk Duck displayed it moved across the lake past the hide to a position where we were looking directly into the late afternoon sun. It then returned as it continued displaying to the small embayment again. A selection of photos shows some of the display.

I was hoping to capture the foot-splash however this is a very rapid action and hard to snap.


In this photo the feet are visible however I still missed the splash.

As we walked away from the lake the Musk Duck was still in the reeds where he disappeared and still making the k-plonk call though not the foot-splashes. We speculated as we walked back to the car that a female was on a nest in the reeds of the small embayment. The breeding conditions (recent good rains) and time of year were right and the male’s behaviour suggested there was a female present – why show aggression to the Black Duck and invest time and energy in an elaborate display if there was no female present?

On our arrival, the lake looked to be empty of birds - how lucky were we to have ended up with a great experience observing a male Musk Duck displaying?

(1)  If you have the P&K and Morcombe smart phone Apps then both are worth checking for the recorded male Musk Duck display calls and foot splash however the k-plonk call is only on the Morcombe App. I have used the k-plonk term in this post to describe the call we heard because this is the term and spelling used in field guides. It is a challenge to adequately describe bird calls in words!

Posted by Avithera at 21:57 No comments: