Unlike the Glossy, the Yellow-tailed Black-Cockatoo is relatively common in East Gippsland though encounters are mostly by chance, given this bird is locally nomadic and perhaps also a seasonal migrant, probably moving to higher altitudes in spring and summer and returning to the foothills and coastal forests to spend autumn and winter. That said, they can be found in our district at any time of year and I suspect we do not have a clear and certain handle on their movements.

About 35 years ago now I witnessed a flock of well over 100 Yellow-tailed Black-Cockatoos at the northern end of Flinders Island where I felt at the time they were gathering for a flight across to the mainland. I suspect at least some birds of this species migrate between Tasmania and mainland Australia.

We sometimes see lone birds and pairs or threes are common and sometimes flocks of five to ten birds. Larger flocks in our area are rare. Yellow-tails pair bond for life and usually one chick is raised, so two parents with a dependent-young is a common encounter.

The Yellow-tails are weakly dimorphic with the most obvious difference between adult males and females being the red eye-ring on males and grey on females. Also, the yellow spot on the ear coverts is dull on males and brighter yellow on females and the male bill is blackish and the female’s whitish.

The above photos were taken in our garden of a pair with a third bird (possibly a young one - not photographed) as they perched briefly in an old peppercorn tree as they passed through on their local nomadic travels.

The following photos were taken of a lone male in nearby forest. 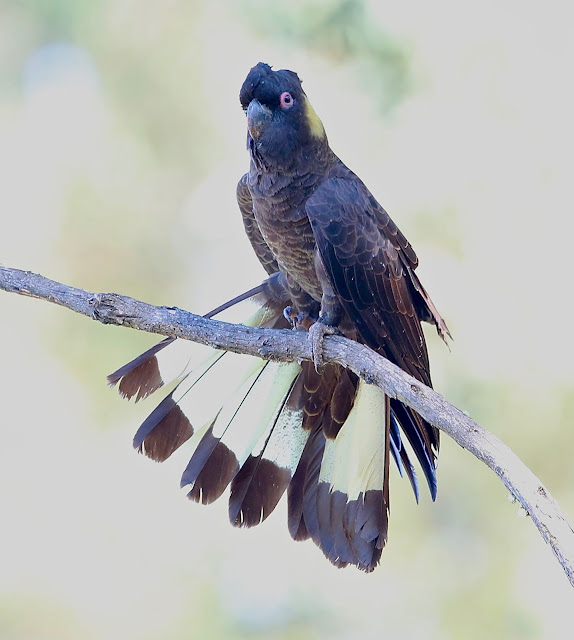 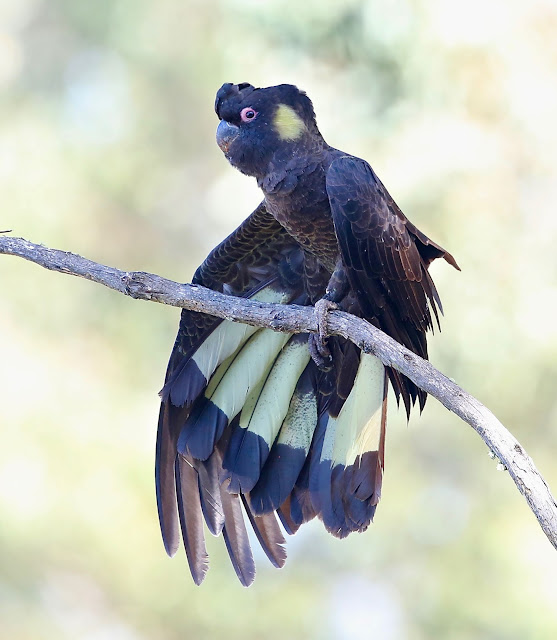 The Yellow-tailed Black Cockatoo (along with its fellow-species) is an iconic Australian bird and its unmistakable and far carrying call, sometimes described as “why-lar” or “wee-lar” (Pizzey & Knight) or “a prolonged kee__________ow . . . kee_________ow” (Forshaw and Cooper), always elicits an emotional response in me, and I suspect in others.
Posted by Avithera at 17:46 No comments:

Glossy Black-Cockatoos (Calyptorhynchus lathami) in Victoria are confined to far East Gippsland.  Within this area they are further confined to forests with good stands of Allocasuarina littoralis (Black She-oak), the cones providing seeds for this specialised feeder.  This strong association, between bird and tree, has given rise to one of its other names, Casuarina Cockatoo. More information on this bird can be found at: http://www.birdlife.org.au/bird-profile/glossy-black-cockatoo

Finding Glossy Black-Cockatoos in East Gippsland is a little like looking for a needle-in-a-haystack or rather a Black She-oak grove. The Morcombe field-guide provides a good description of their behaviour, “Small parties, commonly up to 10 birds, spend most of the day quietly feeding in the foliage of casuarina trees, the only sound being the busy clicking of bills as they demolish the hard, woody seed capsules.”. So, the best method to find them is to drive slowly along forest tracks where there are abundant stands of Black She-oak and hope that some birds are feeding near the road and they flush as you approach. Stopping in particularly good patches of casuarina to look and listen will also increase your chances of finding some.

Sightings of Glossy Blacks west of the Snowy River is somewhat rare and their most westerly occurrence (possibly vagrant) is in forest not far north west of Lakes Entrance. Most recorded sightings in East Gippsland are around Mallacoota where there is relatively good access to forests and a good number of observers compared with the remote country west to the Snowy River.

By good luck we recently managed to flush a pair from a food tree beside Lagoon Track in State Forest south west of Newmerella and not far west of the Snowy River. Glossy Blacks are confiding birds and when flushed from food trees will often just fly a short distance to a higher vantage point in a eucalypt and then sit and watch the intruders. Such was the case for the pair in the following photos. Unfortunately, I was forced to take photos looking into the sun however I had plenty of time to make camera adjustments to deal with the light conditions and further adjust images on the computer later.

Glossy Black pairs often groom one another and no doubt search for and remove parasites, especially around the head and neck area, which can’t be reached with their own bills. It is moving to watch this behaviour and from a human perspective it is hard not to see them as “love birds”. The following photos show some mutual grooming. 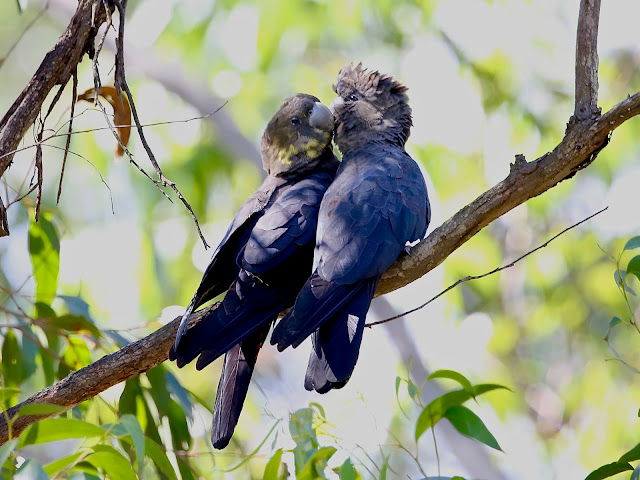 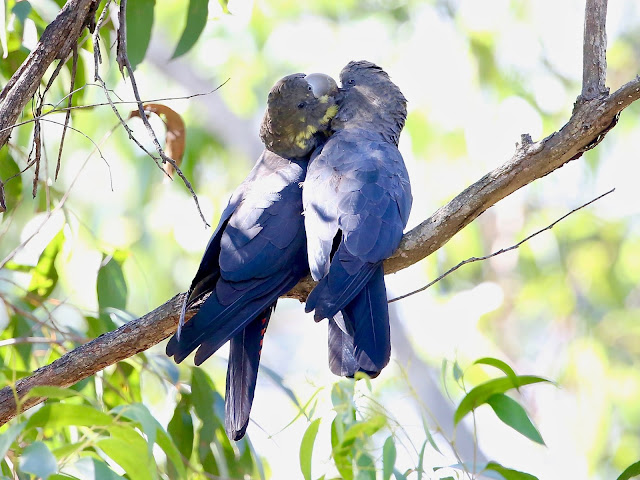 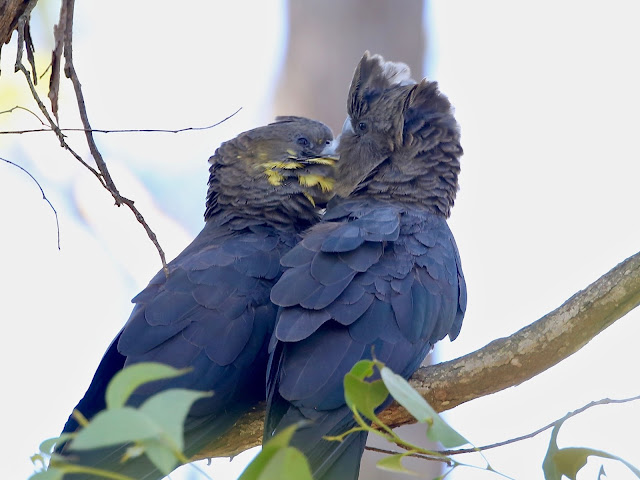 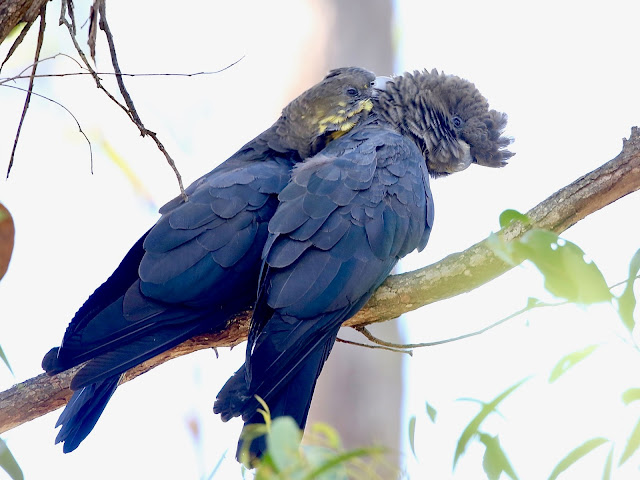 Highly specialised feeders, Glossy Black-Cockatoos are vulnerable as they depend on a few species of Allocasuarina, and during the breeding season, suitable old trees with nest hollows in proximity to a suitable food source. In the ACT and SA (there is a small isolated population on Kangaroo Island) they are listed as Endangered and in Victoria, NSW and Queensland they are listed as Vulnerable.
Posted by Avithera at 14:23 No comments:

There are many types of Wetlands and most are complex ecosystems and most require a drying phase as part of their life cycle to promote rejuvenation. As water levels vary the micro habitats within wetlands change, presenting new foraging opportunities for birds suitably equipped and adapted to take advantage of the changing conditions.
As the season changes in East Gippsland from a dry summer to, so far, a dry autumn, Macleod Morass near Bairnsdale is drying out in some sections exposing large areas of mud with stranded and exposed fish and macro invertebrate life forms. This creates new opportunities for other organisms to grow by exploiting the changing conditions.

Late last week I spent three hours from just before sunrise observing birds feeding on a mud flat at Macleod Morass. The following photos and captions give an insight to the birds exploiting this ephemeral environment.

The Black-winged Stilts were the “stars of the show” with at least 40 actively foraging for tiny organisms on and in the mud and the remaining shallow sections of water. The Stilts have had a successful breeding season judging by the good number of juvenile birds in the flock. 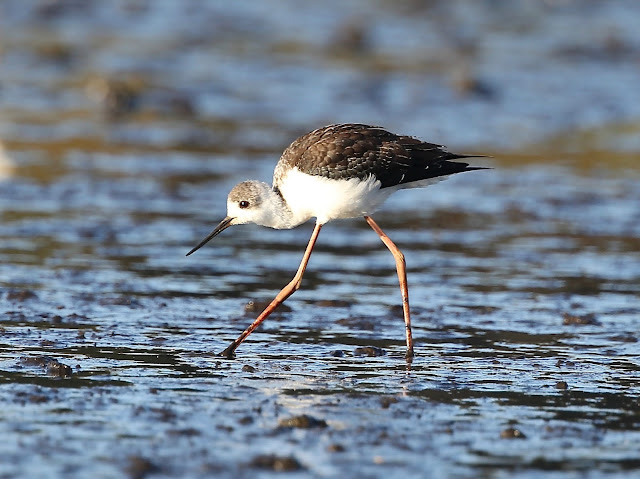 Clearly in overall size, but especially in bill and leg length, the Stilt and Dotterel are equipped very differently. The range of water depths these two species can exploit varies greatly.

The Black-fronted Dotterels were on the mud for the whole three hours I was there. They foraged intermittently and loafed and preened in between. The Red-kneed Dotterels by comparison only arrived on the mud from a nearby dry resting area after I had been there for about 1 ½ hours and then only stayed for about half an hour. They seemed far more nervous and prone to take flight compared to the Black-fronted Dotterels.


Drying wetlands can be a rich source of food for a variety of water and other bird species and a place well worth spending time, especially if you get there just before dawn and watch the area light-up and come to life as the sun rises.
Posted by Avithera at 15:44 No comments: