In May 2016, I featured a post on Satin Bowerbirds. Back then, these birds had maintained active bowers, one at a time, in our garden for over ten years – you can see the post here: http://avithera.blogspot.com/2016/05/satin-bowerbirds.html

Now, over two years on, we still have an active bower. The bower is moved every year or two to a new location in the garden. Over  twelve years or more, we have had several new mature male Satin Bowerbirds responsible for the new bowers though I am sure individual males have maintained bowers for at least two or three years before a new male has taken over.

Even though the males build bowers in our garden where they must tolerate our presence, they remain very wary of our approach and will not stay at the bower if we come too close. So a hide must be used at the bower for close observation and photos. Given they usually select well-hidden locations for their bowers, obtaining photos is difficult and often impossible. Over the years only a few of the many bower locations within our garden have allowed a hide to be set up with reasonable views of the bower and the display area within a suitable distance, with good light and minimal disturbance.

The current bower was moved from its previous location over several weeks back in autumn. By chance the new bower location presented an opportunity, with the judicious use of a few pieces of string, to use my chair-hide and a 300mm focal length lens to observe the activity at the bower and obtain photos.

As the 2018-19 breeding season approaches (September – February) the mature male is busy attending to the bower and display area. He spends his time at the bower adding and adjusting sticks to the bower and arranging his precious blue objects along with a much smaller number of yellow objects and flowers.


The number of blue objects has grown over the years and now easily exceeds sixty items. Most of the objects from the old bower were moved to the new bower. In addition, new items are added although items are also lost to theft by other competing males.


Picking the juvenile males from the females is difficult as they look very similar. Based on the behaviour of the mature male at the bower I now think it is safe to assume that any of the birds accepted at the bower at this time of year and that elicit encouraging displays from the mature male, are female. Other female looking birds I see chased off in a very rapid and aggressive manner I am assuming are unwelcome juvenile males – they never stay long enough for photos or visual ID.

The following four photos are of a female at the bower. 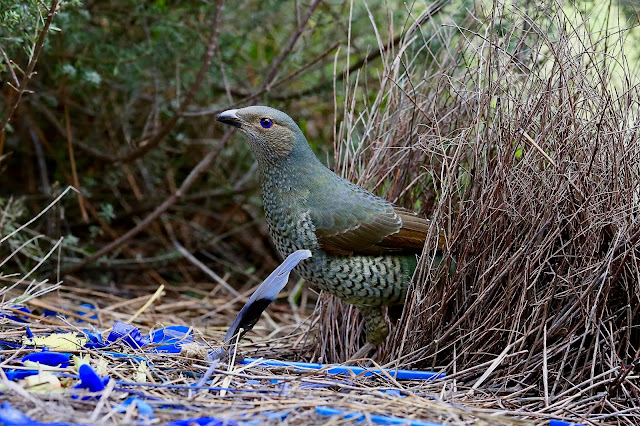 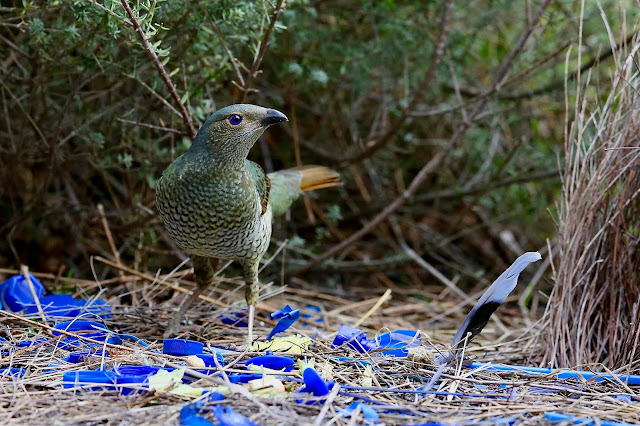 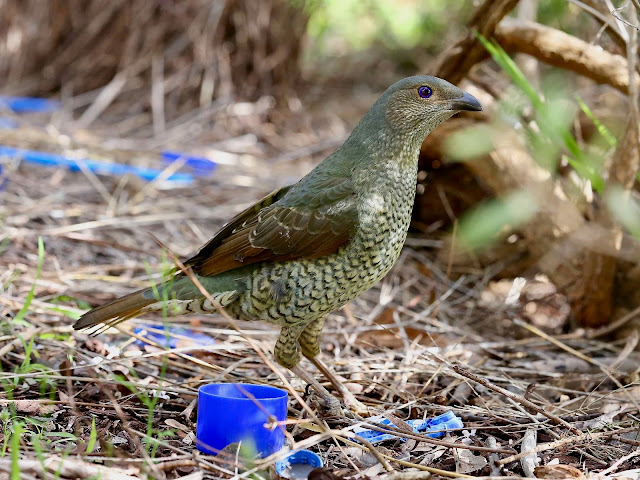 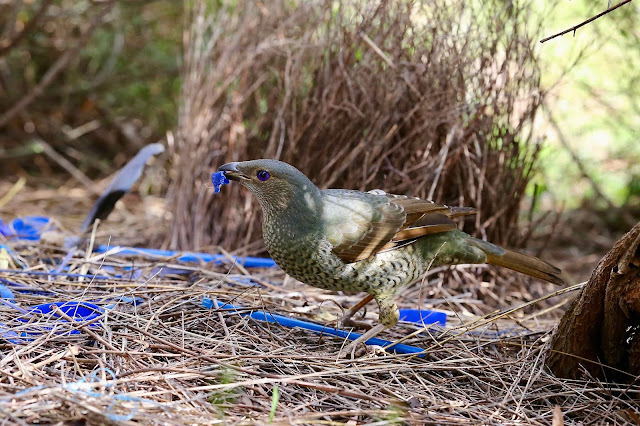 The remaining photos are of the mature male owner of the bower and display arena.

The following photos capture some of the contorted and fluffed up poses of the male in display mode when he is trying to impress females. 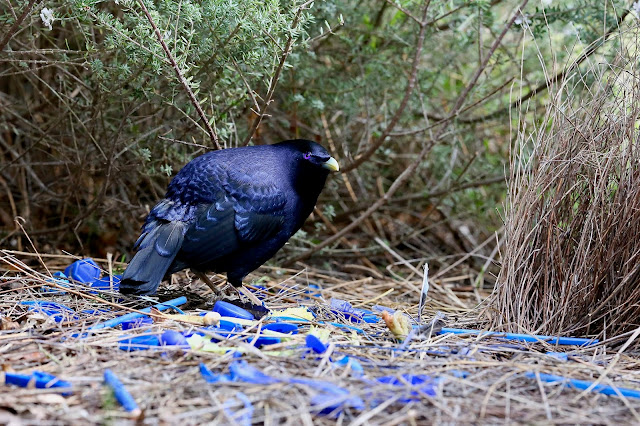 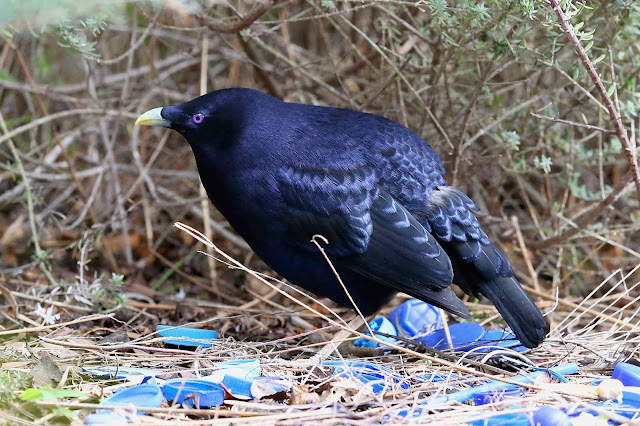 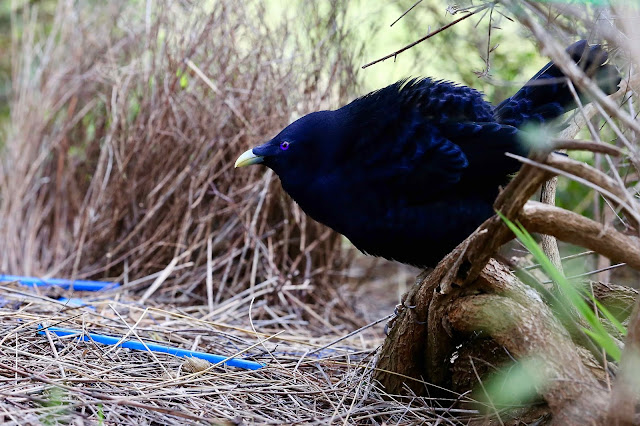 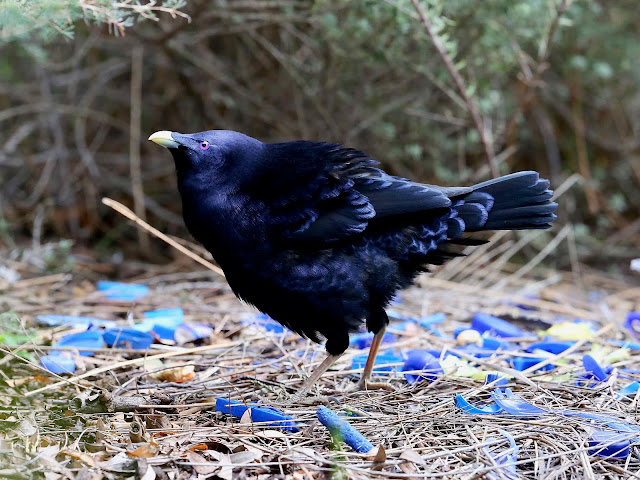 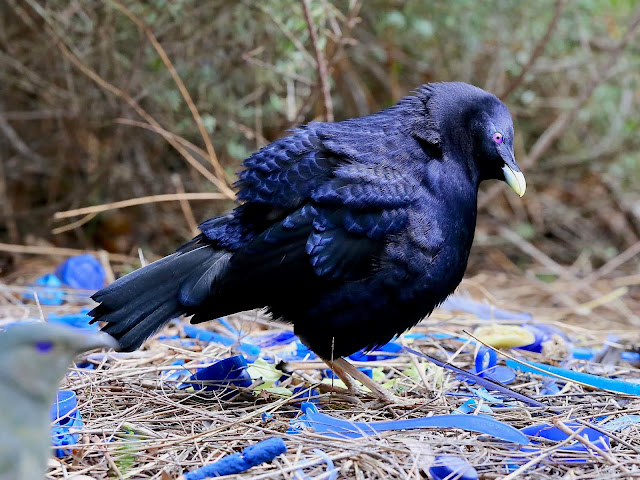 In the following two photos, the male is holding small yellow flowers in his bill. 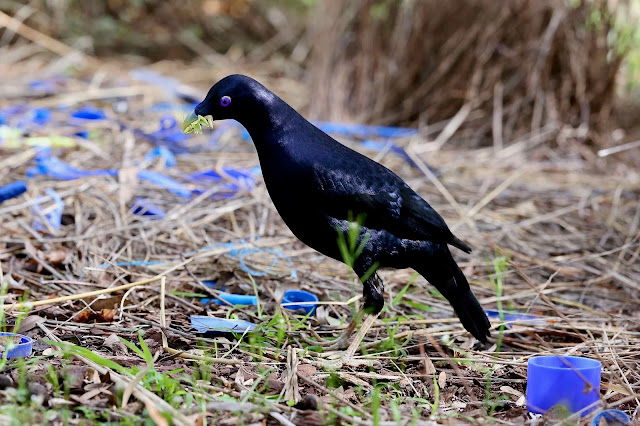 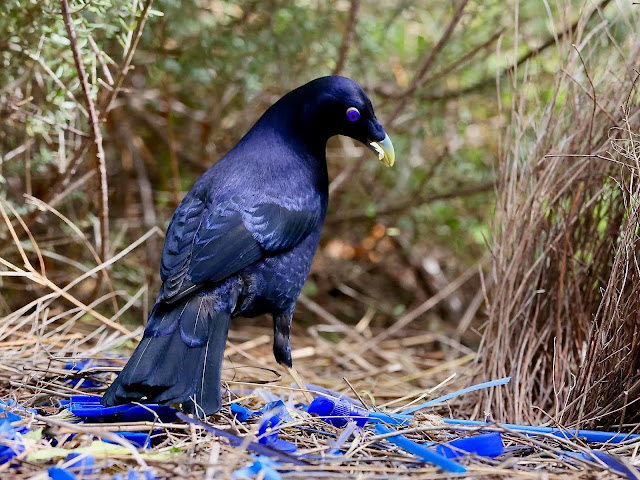 He sometimes holds multiple objects, both blue and yellow in his bill to impress the females.


I hope to bring you more photos of the male and females at the bower over the coming breeding season and with luck and patience, to capture some of the display action.

You can read an excellent brief overview description of the fascinating bowerbirds here:
https://en.wikipedia.org/wiki/Bowerbird

You may also like to see the Western Bowerbird photographed at the Olive Pink Gardens in Alice Springs here: http://avithera.blogspot.com/2015/07/olive-pink-botanic-gardens-alice-springs.html

Posted by Avithera at 09:32 No comments: