For me it is always a special moment when I come across Brolgas.

We camped overnight on a creek between Mt Isa and Boulia in far western Queensland and early in the morning I noticed three Brolgas feeding together out on the near treeless floodplain beside the creek. I thought some photos might be possible when we had packed up if we used the vehicle and van as a hide and moved slowly towards them out on the plain.

A little later I noticed the three Brolgas were moving towards us as they foraged in the grass. Before we were ready to move, they were still tracking in the same general direction and although they were now much closer they were moving past us in a roughly upstream direction. So the moment was right to grab the camera. Then, using some eucalypts beside the creek as cover, I could slowly move on foot towards them. The three birds were aware of my presence but did not seem too wary as they continued to forage and move forward.

I think this is an adult pair with one offspring. Two of the birds are adults based on the presence of the darkish “haired” dewlap under their chins which is larger in males. Also the two adults have more red on the head. The third bird does not have a dewlap and has less red about the head though it does have adult plumage.

They were clearly finding plenty of food in the grass as they probed often and usually picked up a food item to swallow every few steps. They were possibly picking up large grass hoppers.

Each time they moved behind a tree in front of me I used the opportunity to move closer to them.

At this point one of the birds caught my attention when it spread its wings. It reminded me of their ritualised and intricate mating dances. Brolgas mate for life so the two adults I was observing were almost certainly a life-long pair. However, as it was not yet the breeding season, which is triggered by rain and can occur between September and June in the north, it could not be a warm up for a dance.

The black flight feathers which cannot be seen when the wings are folded are apparent in the photo above.

They continued to feed and move in the same general direction. 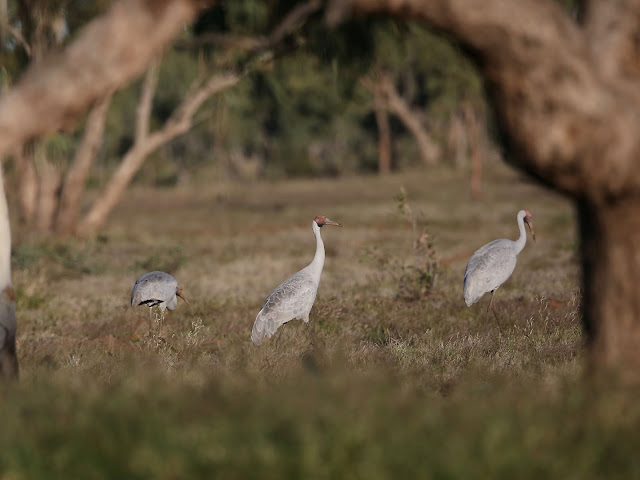 As the bird raised its wings this time it looked back along the line they had been feeding on. It was then I looked back too and saw the cause of their wing raising. A herd of about 20 cattle were heading their way, probably on their way to the creek for a drink.

The cattle at this stage began to prance a little and kick up their heels as they mounted a mock charge towards the Brolgas. At this point no amount of wing raising was going to deter the cattle so the Brolgas took to the air.

As I walked back to camp to continue packing up I pondered how lucky I was to have such a wonderful early morning encounter with these magnificent birds.

There are two species of crane in Australia. The Brolga (Grus rubicunda) is a native Australian species though it is not endemic as it is also found in NG and is a vagrant to NZ, while the self introduced Sarus Crane (Grus antigone) from Asia has been our other crane species since about 1966 when it was first recorded at Normanton Qld. The Sarus Crane is now well established in the Cape York area and the Atherton Tableland is a good place to find them – look in fallow corn crop land near Atherton.

For more information on Brolgas refer to the following link or a good field guide.

If you want to see Purple-crowned Fairy-wrens, then you will have to make a trip to the Top End. You will have a choice of seeing two races, either the nominate race Malurus coronatus coronatus in which case you will need to visit the Kimberley or far north west NT, or to see Malurus coronatus macgillivrayi you will have to visit the Gulf Country in either NT or far NW Queensland. Further, you will need to look in pandanus/paperbark vegetation along creeks and rivers, the preferred habitat of this Top End endemic fairy-wren.

From my experience there are two sure places to find the species - in the Kimberley at Mornington, the AWC sanctuary off the Gibb River Road in WA, or at Boodjamulla (Lawn Hill) NP in Queensland and nearby Adels Grove. However, males in breeding plumage will be hard to find outside of the breeding season in June and July

The National Park and adjoining area is rich in bird species, however Adels Grove from my experience is the best place to both stay or camp as you will most likely find more species at Adels Grove than in the NP. Also, Adels Grove has good facilities and offers guided bird walks and tours. Of course visits to nearby Boodjamulla NP are highly recommended.

Other species photographed at Adels Grove. 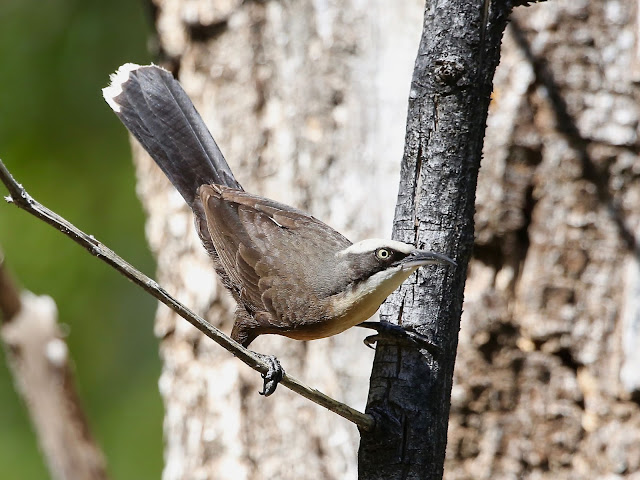 The Grey-crowned Babbler is the only one of the four species of babbler to be found in the Top End. Like other babbler species they are highly social birds which live in extended family groups. Sometimes they are elusive and flee as you approach and sometimes they can be inquisitive. 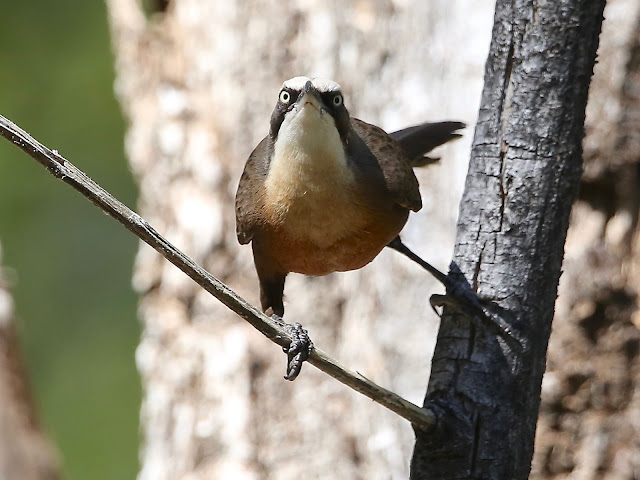 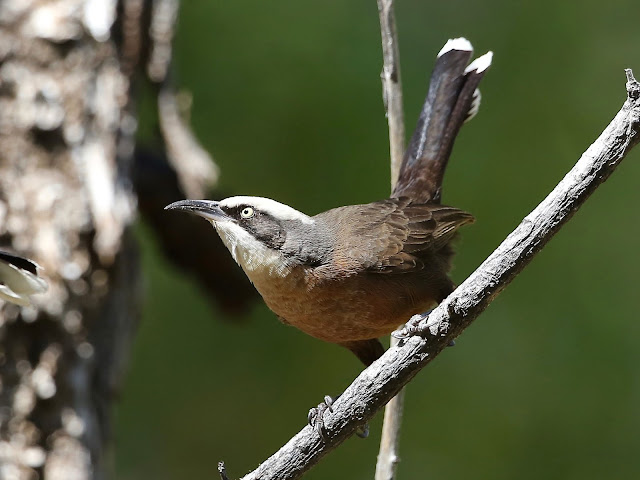 Long-tails are endemic to the Top End where they are common. This one with a red bill is the NT/Qld race – the WA birds have a yellow bill.

It hung in this positions for 10 minutes or more. I think it was looking to go to a nest hollow but was too wary to make the move – not due to my presence I might add as I was a long way off.
Posted by Avithera at 18:39 No comments:

These photos were taken at Butterfly Falls. 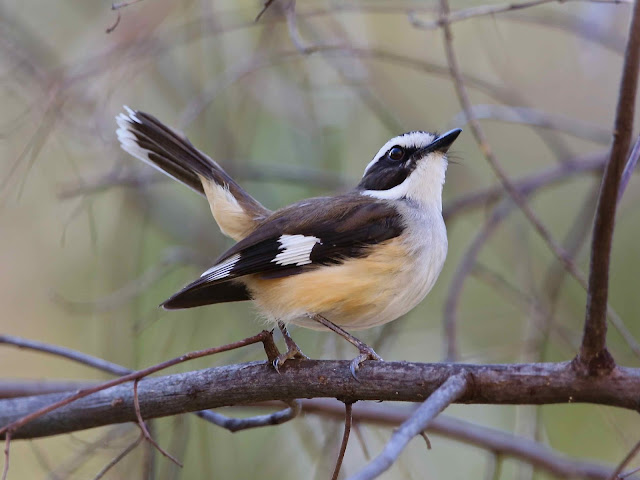 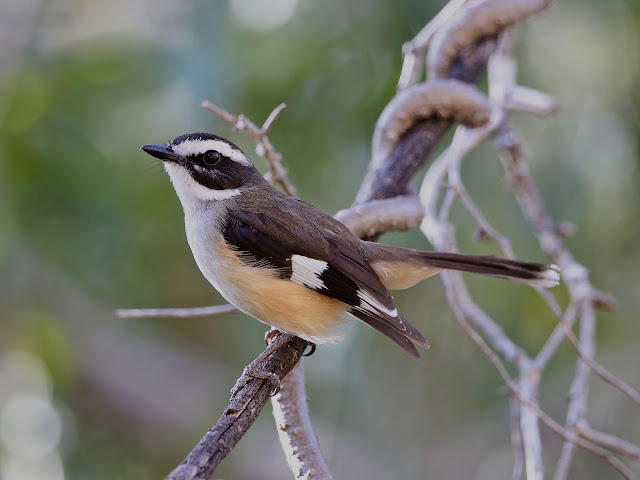 I find the Buff-sided Robin very attractive and was glad to catch up with them again – I last saw them in the Kimberly at Mornington (AWC sanctuary) in 2009. 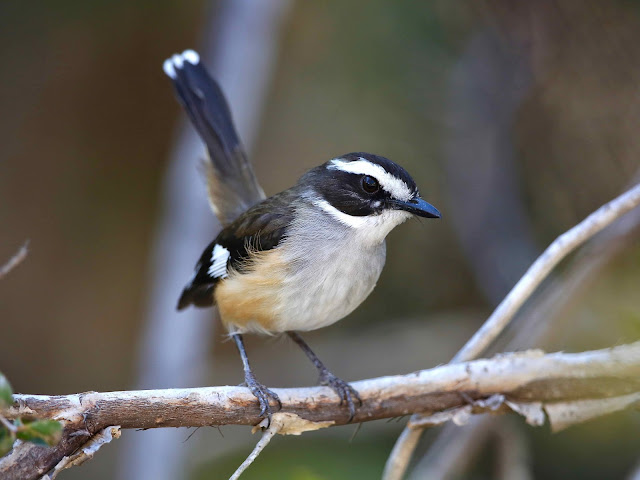 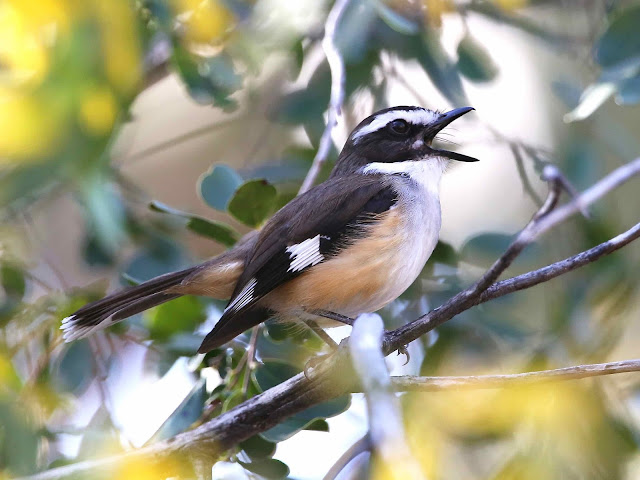 For a small bird they have a rich and loud call – check it out if you have access to bird calls. 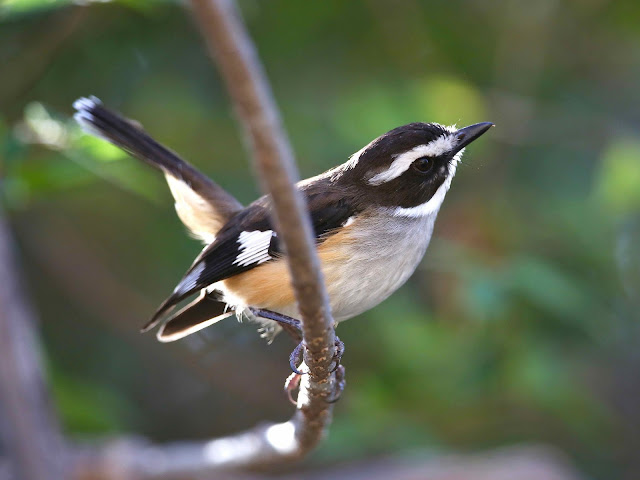 Posted by Avithera at 17:20 No comments:

A leaking tank at a wayside stop between Mataranka and Roper Bar provided a drink for some local seed eating birds.

Some Masked Finches were the smallest species in for a drink.

Posted by Avithera at 13:48 No comments:

As we all know Masked Lapwings aggressively defend their breeding territory especially when they have eggs and young.

Who hasn’t been harassed by a cranky Lapwing?

At Yellow Waters in Kakadu National Park I witnessed a Lapwing harass and drive away a Whistling Kite that had landed on a dead branch at the top of a large paperbark tree within its territory.

The Lapwing made six or seven swoops close to the Whistler before it moved on. I managed to capture three of the swoops.

In the second attack I captured the Lapwing very close to the Whistler – a matter of luck I must point out, as the swoops were very fast. I should have tried a few bursts of continuous shooting to try and capture the action.

Posted by Avithera at 21:07 No comments:

The Northern Territory Top End has now had three below average wet seasons with the last (2016/17) being particularly poor. As a result, the Dry Season in 2017 is drier than normal and many wetlands are either dry or have much less water than normal for this time of year. I suspect the dry wet season has also impacted on the savannah woodlands with low numbers of flowering trees and therefore low numbers of birds in the woodlands.

We did a boat tour at both Yellow Waters (Cooinda in Kakadu NP) and in the Mary River NP at Corroboree Billabong. While there was still water at Yellow Waters the wetland birds seemed to be well down on our experience of the same tour we did there in 2007 which followed a big wet season.

Trying to take bird photos from a boat with large numbers of people on board and limited time is not ideal, and in future I think I would prefer to organise a small fishing boat with a professional fishing guide to take me out. On the plus side the tour boats are a regular feature and the local birds have adjusted to their presence and become very confiding in the case of some individual birds and some species. A smaller fishing boat may not achieve the same close approach as the tour boats? Never the less here are some wetland bird photos taken on two tour boat outings.

Putting the frustrations of bird photography aside a tour of Top End wetlands in a boat such as the Yellow Waters’ tour is very enjoyable and highly recommended.
Posted by Avithera at 14:47 No comments: