In early October 2017 I spent a couple of hours with my camera birding at the Byron Wetlands which is a top birding location close to but away from the hustle and bustle of Byron Bay. For more information regarding the Byron Wetlands see this post: http://avithera.blogspot.com.au/2017/05/miscellaneous-birds-byron-bay-2.html

On my own, I managed to record 56 bird species in 2.5 hours. So the Byron Wetlands is a hot spot for birds – you can see the species recorded here:
http://birdata.birdlife.org.au/survey?id=1990715&h=de5a6c20

Here is a selection of bird photos from my late afternoon visit to the wetlands.

The Byron Wetlands are always worth a visit however access via an electronic key requires pre-planning. The wetland is open on Tuesdays and Thursdays and weekends.
Posted by Avithera at 12:53 No comments:

Recently we flew to New Caledonia for a three-week sailing trip, which included the Isle of Pines in the south and then east across to Ouvea at the northern end of the Loyalty Islands group.

We spent a couple of days at the Atoll de Beautemps-Beaupre (1), the northern most atoll of Ouvea, where we found a nesting colony of Sooty Tern (Onychoprion fuscatus) and a smaller nesting colony of Brown Booby (Sula leucogaster).  I also found a surprise pair of Peregrine Falcons, Falco peregrinus sub species nesiotes, which are found only in Vanuatu and New Caledonia - where they are uncommon - and in Fiji, where they are rare.

We anchored off the only coral cay island on the Atoll de Beautemps-Beaupre.


The uninhabited island is about 1 km long and is based on an ancient coral reef with overlying coral sands which support the dominant Coconut Palms plus a small variety of other tree species including Pandanus Palms.

Access to the breeding colonies on the island is difficult due an eroded coral rock shoreline which is undercut due to sea erosion of the old coral reef. However, for breeding sea birds, the rocky shoreline does provide some protection from visiting seafarers who anchor at the opposite end of the island.  Access over much of the island is also difficult due to thick palms and other understory vegetation. After a failed attempt to walk to the colonies I accessed them by water in Alchemy 1’s dingy.

The Brown Boobies were nesting and resting on a bare section of old coral reef at the far end of the island from our anchorage.


My first task was to make my way slowly and carefully past the nesting Boobies taking some photos as I went. Most of the birds stayed on their nests and the few that flew soon returned when I had passed by. There were no predators to threaten the Boobies – the only other water bird I saw in the area, apart from the Sooty Terns, was one grey morph Reef Egret.

There were approximately 30 Brown Booby nests. Many more birds were roosting or perhaps preparing to breed. There may have been even more Boobies roosting on the island overnight. Breeding had just begun as the nests I saw contained only eggs and all other nests had birds sitting with no chicks present as far as I could see.

There were many more Brown Boobies present than were nesting at this stage. Some took briefly to the air allowing for a few flight shots.


Having passed through the Booby nesting area I came to the Sooty Terns, where large numbers of advanced juveniles were in many crèches spread along about 100 metres of the rocky shoreline. All up, by my conservative estimate there were probably 400-500 juveniles present. Given Sooty Terns only lay one egg there should be about 1,000 parent birds present. However there were nowhere near this many seen, so I assume most of the adult birds were out at sea hunting or perhaps they had moved on, leaving the young to fend for themselves?

At this stage I reached the start of a section of shoreline with crèches of young spread along about 100 metres of rocky reef. To go any further would have unduly disturbed the young birds so I sat down on a rock and observed the activity.

I felt the birds seemed to be a little agitated especially the adult birds which flew in at speed wheeled around over the juvenile crèches and immediately zoomed away again without stopping to feed a young one. I was starting to think I must be the cause of their behaviour when I noticed a different bird in the air above me. A quick look with the bins revealed a Peregrine Falcon. It circled around and around calling as it went.

After taking a few photos of the circling Falcon I picked up the call of a second Falcon which I soon found perched in a Coconut Palm before me and right above a couple of juvenile Sooty Tern crèches.

The second Falcon was noticeably larger than the circling bird so I decided this was a male-female pair. A later check of Guy Dutson’s Birds of Melanesia field guide revealed that this pair with a buff or rufous wash on their underparts were the sub species nesiotes which is uncommon in Vanuatu and New Caledonia where it breeds and is rare in Fiji where it has also been recorded breeding.

I was surprised to find Peregrines way out in the Pacific Ocean exploiting a temporary Sooty Tern breeding event on a remote coral cay island.  Here, picking up young chicks and juveniles would be very easy for these accomplished hunters. As the juvenile Sooty Terns were close to moving on, the Peregrine pair would also soon be needing to move on and find new prey to exploit.

I sat for 30 minutes or so looking to see if the Falcons took a young tern however the circling bird soon landed on a Coconut Palm a short distance away and the female remained perched in the palm above the tern crèches. I took a few flight shots of the terns while I sat observing. The terns were very fast for photos however I managed to capture a few passable images. 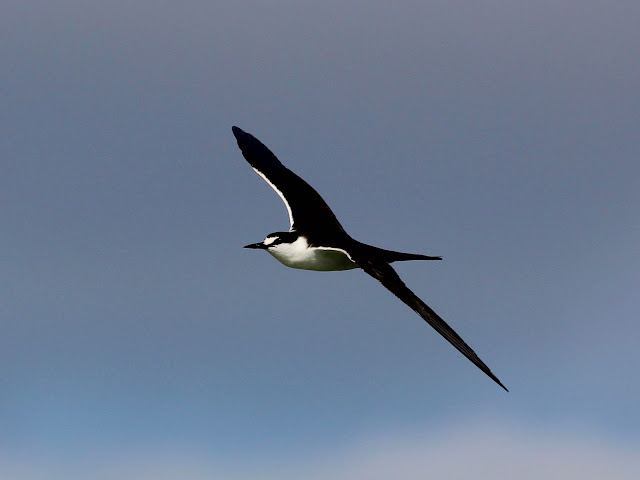 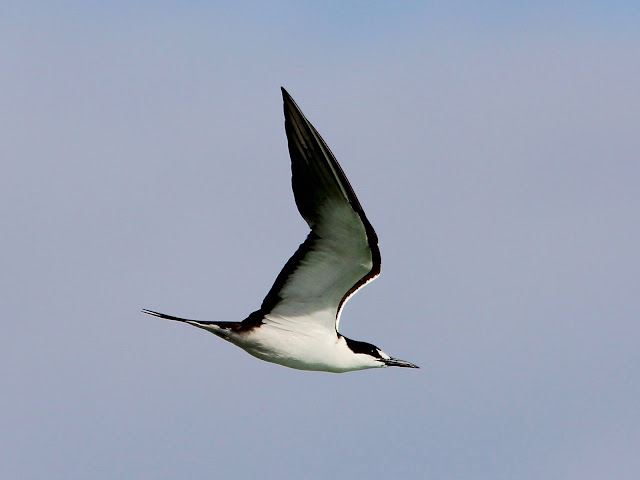 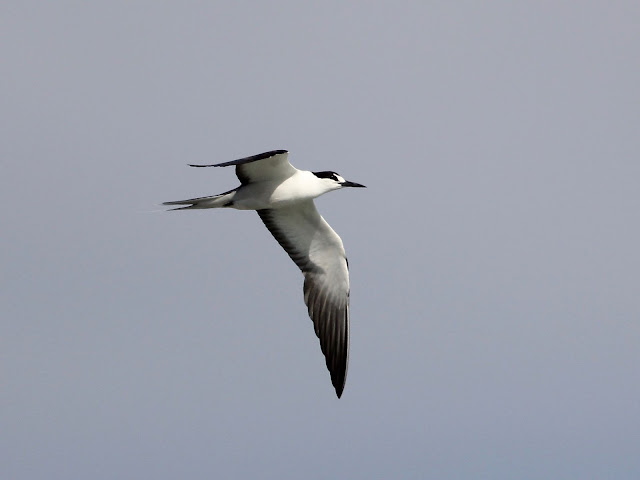 It was soon time to return to Alchemy 1 for morning tea and then a snorkel on the reef.


What a privilege to visit such a remote and beautiful location and observe both sea birds above the atoll and sea life below.

(1) Named after a famous French Hydrographic Engineer and cartographer, Charles-Francois Beautemps-Beaupre 1766-1854.
Posted by Avithera at 11:03 No comments:

The Kagu (Rhynochetos jubatus) is a rather rare bird with just one extant species in the family Rhynochetidae, which is endemic to Grande Terre, the main island of New Caledonia. I had seen the bird on television documentaries and in preparation for a trip to New Caledonia in September 2017 I purchased a copy of Guy Dutson’s field guide, Birds of Melanesia, which features the Kagu on the front cover.


So I was keen to see the bird, however my only viable opportunity was at the botanical gardens and zoo (Parc Zoologique et Forestier) in Noumea as the nearest natural population was two hours out of Noumea in the Blue River Provincial Park (Parc Provincial de la Riviere Bleue).

The Kagu is listed as endangered by the IUCN and at the Parc Zoologique et Forestier captive bred birds are being raised for release into the wild to avoid extinction of the species.

I don’t like photographing captive birds however in the case of the Kagu I did take some photos of captive birds which are included in this post.

The Kagu in the Dutson field guide is located after the Bitterns.  The Kagu is similar to the sun-bitterns of Central and South America which may be the Kagus closest relatives. I understand there is some taxonomic uncertainty regarding the Kagu’s evolutionary origins and therefore it is not clear where the species fits in the world of birds.

Kagus are flightless and their main habitat is the floor of wet forests with an open understory. No doubt being flightless ground dwelling birds with specialised habitat requirements has made them vulnerable to habitat destruction and introduced animals such as dogs, cats, rats and pigs which came to the islands of Melanesia with people.

The Kagu is an emblematic species which encapsulates the issues faced by endemic species which have evolved in isolation on oceanic islands and are then faced with new predatory arrivals including humans and those brought by humans such as pigs, cats, rats and dogs.

The Kagu along with the Horned Parakeet (see photo below), another rare and vulnerable New Caledonian endemic bird species, are featured on the 1000 Franc note, presumably in recognition of their plight and special merit.

The following text has been copied from Wikipedia:

The caged Kagus I observed walked a few steps and then paused motionless for quite some time giving the birds an unusual demeanour – I assumed when motionless they were looking intently for food among the litter on the floor of their semi natural cage habitat. They were silent when we were there late morning – they usually only call at dawn and unfortunately I did not see any displays when the birds erect their crests and spread and droop their wings. There was one juvenile bird with two adults in the walk-through cage where I took the photos for this post. The captive breeding program looked to be on a small scale?

The future of the Kagu is in the hands of the New Caledonians, I hope it has a secure future.
Posted by Avithera at 16:33 No comments: