We recently found a flock of 50 - 60 Topknot Pigeons (Lopholaimus antarcticus) at the Cave Beach picnic and camping area in Booderee National Park south of Jervis Bay in NSW. The large grey pigeons were there to feed in the Lilly Pilly trees that were heavily laden with fruit.


We see smaller numbers of Topknots in East Gippsland in rainforest at the Cabbage Tree Palms Reserve near Marlo and at Fairy Dell near Bruthen where Lilly Pilly are once again the main attraction for these rainforest fruits specialists. Rainforest gullies in the Gippsland Lakes area are the southern limit of their range though, as per a note in Pizzey & Knight Birds of Australia field guide, good numbers turned up in Tasmania in the dry summer of 1994/5. It seems almost incredible that these large rainforest pigeons would fly across Bass Strait, though they are strong fliers.

I have always found Topknots to be very wary birds and hard to photograph. I suspect they have been hunted in the past for food as they are large plump birds and probably good eating. Topknots are easily identified at a distance by their large pale grey appearance and at closer range their very distinctive and rather weird swept back head feathers which are grey in front and rich rufous at the back. Also, when seen from behind, the dark charcoal tail crossed with a whitish band and fanned when landing is also a distinctive ID feature.


I had given up hope of any close photos when we found two birds perched in the canopy of the trees above the picnic area where there were Lilly Pilly heavy with fruit. Still not ideal for photos however better than no close ups at all.


After they moved a little, we found the two Topknots perched in the upper branches of a dead tree. Flocks of Topknots will often perch above the rainforest canopy in dead trees. One soon departed, however one remained giving a few photo opportunities in the afternoon light before it was dive-bombed by a Pied Currawong.


It was a rewarding experience to unexpectedly cross paths with the nomadic Topknot Pigeons at Cave Beach in Booderee NP.
Posted by Avithera at 10:49 No comments:

Banded Stilts (Cladorhynchus leucocephalus) and Red-necked Avocets (Recurvirostra novaehollandiae) are both Australian endemic shorebirds which share habitat preferences. However their very different bill shapes and feeding styles show they each exploit different foods, though they no doubt overlap to some extent. They are both nomadic and are often found together.

Both species turn up on wetlands of the Gippsland Lakes, finding refuge here when conditions inland are dry – but they do not breed here.

The wetlands at both Hollands Landing and Jones Bay are good places to find both species when they are present on the Gippsland Lakes. Recently we found an estimated 300 Banded Stilts and 700 Red-necked Avocets on Victoria Lagoon at Hollands Landing.

In the past I have recorded a flock of Banded Stilts on Jones Bay of 650 birds, counted on computer from a series of photos taken of the birds resting together along a shoreline - they are intensely gregarious birds.

The largest flock of Red-necked Avocets I have recorded exceeded 1,300 birds.  This was also on Jones Bay. They also are gregarious though more so when resting/roosting and not so much when feeding.


Following a dry year so far in 2017, Victoria Lagoon is drying out rapidly and in the process large areas of shallow water and wet muddy/sandy shoreline are being exposed. The lagoon is roughly 2km by 2km and varies over time from fresh to hypersaline. At present, there are good food resources available as evidenced by the presence of large numbers of ducks (teal est. 300+), Red-necked Stints (est.400), Red-capped Plovers (est.100) and the Stilt and Avocet numbers quoted above.

The foods available include crustaceans, worms, molluscs and insects.

Obtaining photos of the birds on Victoria Lagoon is limited by the distance the birds permit approach, their FID (Flight Initiation Distance) varies with their mood, as sometimes they appear relaxed and at other times, nervous and flighty. At best the birds have a minimum FID beyond which you cannot approach with the Banded Stilts FID generally greater than the Red-necked Avocets from my experience. There is no cover around the lagoon shoreline and the wet margins are muddy, though wallowing into the mud is not required as by this point the FID has usually been exceeded. A long lens is required to obtain reasonably close shots of the birds under these conditions.

On both occasions when I recently observed the Stilts and Avocets, the Avocets were mostly resting in tight, though strung out flocks, which included a few Stilts, while most of the Banded Stilts were actively feeding together in lines.


The following selection of photos were taken from two visits – unfortunately it was overcast on both occasions.


Not only is the Red-necked Avocet’s bill an amazing shape but it is incredibly thin and hardly seems capable of the hard work required to trawl for food without sustaining damage. In the following photo the middle bird with its head down has its bill slightly open – take a close look at just how thin the two bill segments are – and yet they use the bill partially open in a side to side sweeping motion to capture food! 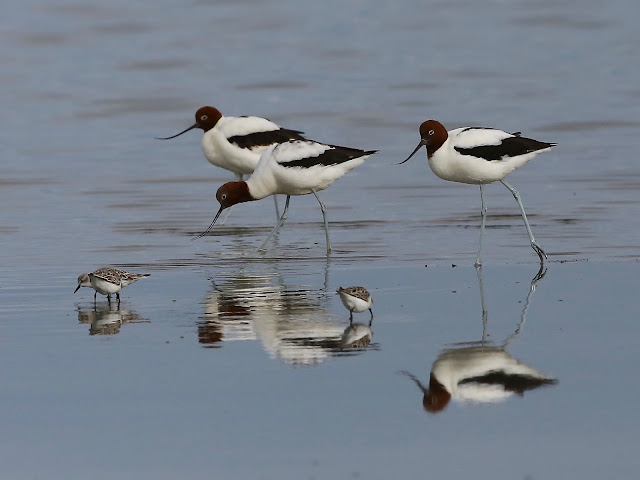 It is interesting to observe flocking birds and what causes them to flush. Sometimes the cause is obvious, such as a raptor appearing or my approach, however at other times it seems like a false alarm with no obvious cause. I guess for vulnerable birds it is safer to err on the side of caution. That said a flock will sometimes flush leaving a few birds behind alone and on their own looking decidedly vulnerable without the protection of numbers. Are these outliers brave and not easily spooked or simply foolhardy? Or are they just not smart enough - or perhaps they are down on energy, not well, and simply do not have the reserves to fly with the others?

Cropping some of the other photos revealed a fuzzy but possibly good enough image to show the letters CKY.

Joris from the Australian Wader Study Group advised the following in a preliminary email response to my report on the flagged bird:

I cannot get you information immediately as there seems to be a scribe error in the banding database. However, looks to be part of a big catch in Western Port Bay in January 2015. Will let you know the details as soon as possible.

After a couple of sessions at Victoria Lagoon it was a real bonus to find among a bunch of photos a leg flag and report this as it helps build a picture of the movements of this highly nomadic and erratic bird, both in term of movement and lifestyle, especially their breeding requirements.
Posted by Avithera at 10:16 No comments: