Inevitably, for various reasons, I hit periods with little or no photo subjects and material for blog posts. Also, inevitably a miscellany of bird photos taken here and there that do not fit into blog posts accumulate in my photo files. Now is such a time, so here is an offering of miscellaneous photos captured in July 2018 along the NSW north coast.

The warm clear July days on the NSW north coast now seem a distant memory as I sit at home in East Gippsland Victoria preparing this blog on a cold (it was 10oC outside at midday), wet and windy Sunday in August – mind you I am not complaining. After all it is still winter and we are in the grips of a serious drought so any rain is much appreciated.

Descriptions of the photos and comments are contained in the photo captions.

Blue-faced Honeyeater – a juvenile with a green face foraging for insects and spiders under Coast Banksia bark.

On a recent trip, we found large numbers of White-cheeked Honeyeaters (Phylidonyris niger) along the NSW north coast especially where Coast Banksia (Banksia integrifolia) were in flower.

The Australian Bird Guide Menkhorst et al describes this species well, “Sedentary or local blossom nomad, highly nectivorous; also catches insects by sallying. Gregarious, noisy, pugnacious and conspicuous.”. This is also a good description for the closely related New Holland Honeyeater (Phylidonyris novaehollandiae) which is common in East Gippsland. The White-cheeked is not found in East Gippsland though there have been a few reports of rare individual birds – for example one was sighted on Raymond Island on the Gippsland Lakes in the last year or so.

While the White-cheeked Honeyeaters were very numerous and active, in fact I would say hyper active - like kids on red cordial at a birthday party, I found them warier than the New Holland and harder to pin down for photos. I did catch up with one in the Arakwal National Park on the coast just south of Cape Byron. Most of the White-cheeks were busy in the Coast Banksia flowers where nectar was clearly the attraction. However the bird in the following photos was chasing insects – I suspect this bird had young it was feeding in a nest as it was gathering insects and not eating them as it went. 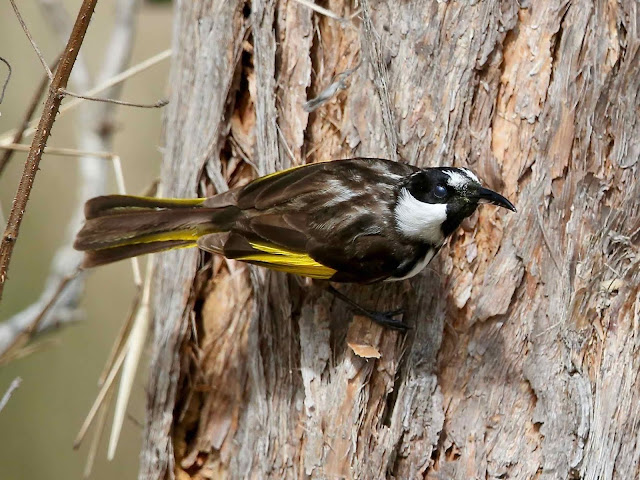 Another name for the White-cheek is Moustached Honeyeater which perhaps better describes the white cheek patch which is not a patch but rather a fan-shaped plume. The white feathers emerge as a tuft of feathers from the cheek and fan out in a plume. This is obvious in the following photos. 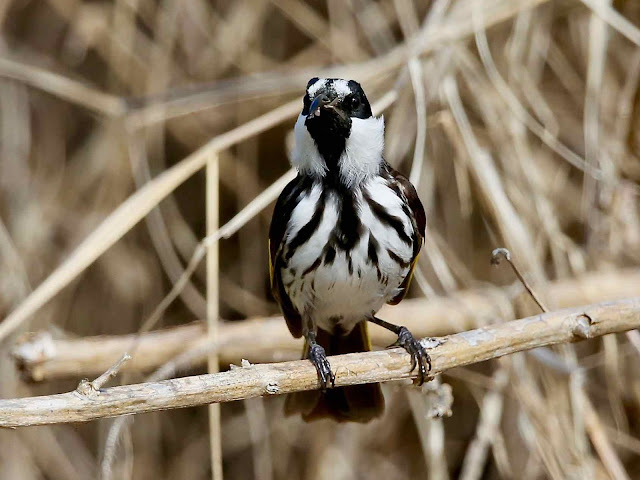 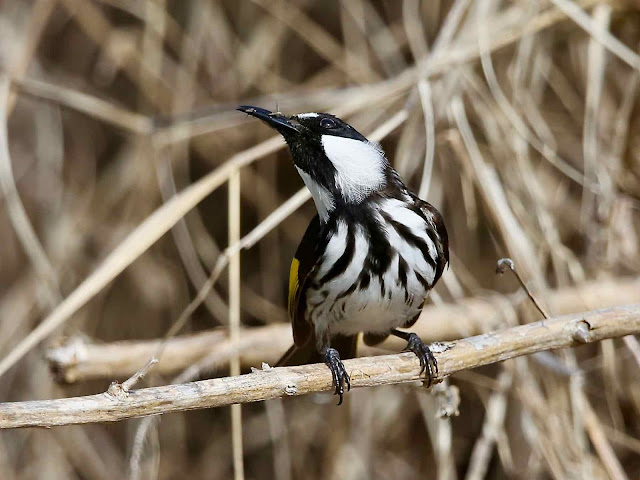 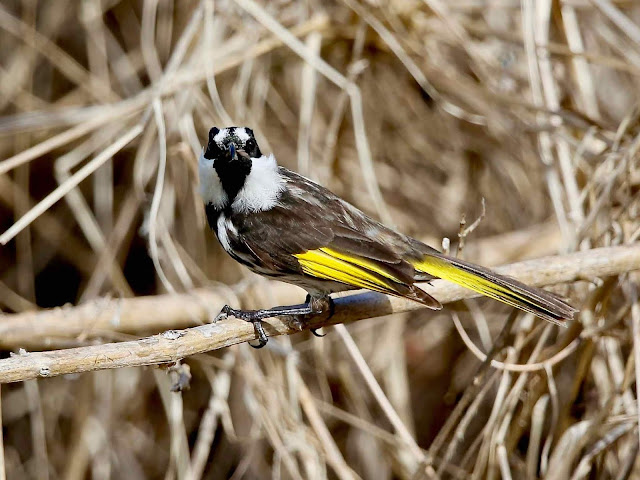 Like the similar New Holland, the White-cheeked Honeyeater has a bold and conspicuous yellow panel on the folded wing – the yellow outer tail feathers are also conspicuous. 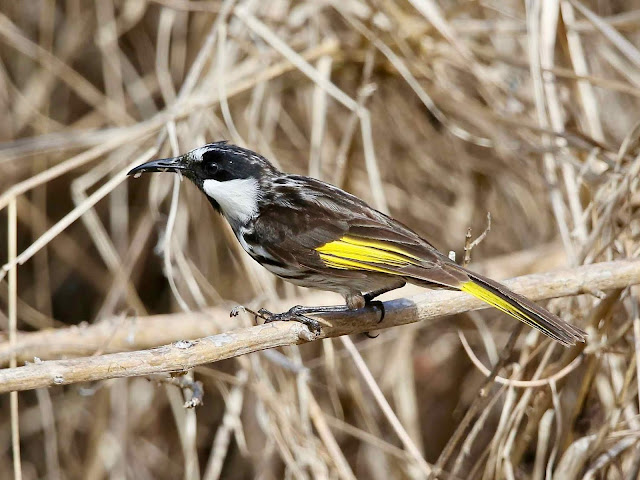 South of Byron Bay at the small coastal township of Red Rock I found a very confiding juvenile White-cheeked Honeyeater in salt and wind stunted Coastal Banksia on the headland. The trusting young bird emerged from the dense banksia every time I walked by its location on the climb to the headland.


Even though the New Holland Honeyeater’s range overlaps with the White-cheeked along the northern NSW coast, over a three-week period during July and early August from Byron Bay to Gosford, we did not see one New Holland which was a little surprising given the habitat looked perfect for them.

Posted by Avithera at 09:44 No comments: