As mentioned in the “Fairy Terns mating” post back in November, I have been assisting with photos for a juvenile small tern age classing project.  Field work is still underway as the terns are still breeding. During the photo sessions, which have been focused mainly on chicks and juveniles, I have captured photos of adult Little and Fairy Terns in breeding plumage so I decided to present some of the adult breeding plumage birds in this post.

In the field and at a distance, the very similar Little and Fairy Terns can be a challenge to ID if you are not familiar with them or do not have good close views. In East Gippsland, the two species overlap and breed together so we need to come to grips with ID of the two species. In non-breeding plumage, the two species are nearly impossible to separate. The existence of hybrid birds further complicates ID.

In the following images, you will see that the Fairy Terns have a small black area in front of the eye and the rest of the lore is white whereas the Little has a black pointed lore. Apart from this difference, the darker colour of the primary flight feathers on the Little and the lighter grey on the Fairy are the other distinguishing features. A dark tip to the yellow bill may also help ID, however some adult breeding plumage Fairy Terns have black bill tips, so this feature should only be taken into account together with the other two features mentioned.

Fish are brought back to the breeding colony to feed mates and young. Once mating is over fish exchange sometime takes place when incubation duties are handed over. Once the chicks hatch, fish brought to the colony are mainly for feeding young.

The fish in the photos are a typical size with several species of fish being taken. The fact that the small terns have chosen to breed on the Gippsland Lakes shows there is a good supply of small fish available together with the other key factor – suitable nesting sites.

Sometimes birds seem to take some time to find a recipient for the fish or sometimes the young are simply full and are not interested in the fish offering, in which case the adult usually eats the fish itself.


However, the bird in the above photo has a dark tip to the bill, the primary flight feathers look dark, the black in front of the eye extends well forward and there is a little dark speckling across to the base of the bill. Could this be a hybrid bird?


Note the pointed black on the lore and dark outer primary flight feathers, however the dark bill tip is small – I have noticed this varies greatly. The bird is fluffed up so it does not look streamlined in this photo.


It is hard to pick up eye shine in terns and their eyes often look flat or even depressed, however this photo shows this is not the case. Also notice Bling may be starting to moult out of breeding plumage - the black on the forehead is looking patchy.


I hope you have enjoyed the portraits of these beautiful and vulnerable small terns. There will be more posts in 2018 featuring the juvenile birds.

This is my last blog post for 2017.
Thanks for following my blog and I hope you have enjoyed the posts.

I look forward to sharing more posts with you - best wishes for 2018.

Every year at our property the local Grey Butcherbirds go missing in spring and then turn up in early summer with young ones. I have no idea where they go to breed - I suspect not far, but they are completely absent during this time.

I noticed today the birds had arrived back and they spent the afternoon hunting food in our paddocks around the house. The parent birds were kept busy finding food. The young ones also searched and hunted food themselves but also followed the adults closely, often begging for and receiving food. They searched for food from perches on fence posts and low in trees and flew down to take insects and other prey on the ground.

I followed them about for half an hour or so to capture some of the activity.

After a failed breeding attempt the resident Grey Fantail in the photo below has just finished another nest and started sitting in the last day or two.


I don’t like the Fantail’s chances of success as the return of the Butcherbird family today is very unfortunate timing.
Posted by Avithera at 21:07 No comments:

The Grey Fantail’s aerial acrobatics, cheerful calls and confiding nature make it a well-known and much loved bush bird. Wide spread across most of Australia, there are many races (sub species) and much geographical plumage variation. In south east Australia, we have Rhipidura fuliginosa sub species alisteri.

Grey Fantails are migratory, resulting in seasonal variations in their numbers at the local level. Some of these tiny birds even migrate across Bass Strait – to and from Tasmania - where the sub species is albiscapa.

We recently came across an adult pair busy feeding their three young not long out of the nest. The young first fledge with a distinctive russet brown and buff plumage. We don’t often see this plumage as they soon commence a post juvenile moult and rapidly acquire some adult plumage characteristics (if you have a copy, see notes regarding sub species in The Australian Bird Guide, Menkhorst et al, p460).

These photos of Rhipidura fuliginosa alisteri juveniles and the parent birds were taken on 24/12/17 at Macleod Morass near Bairnsdale. 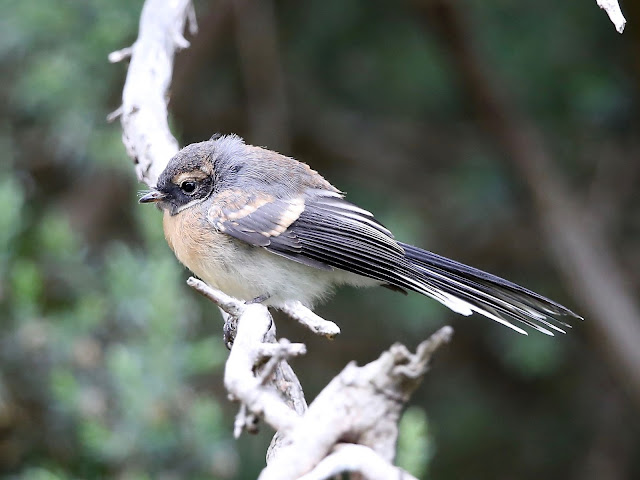 It is a rare day out in the bush when one does not encounter at least one or two delightful Grey Fantails.
Posted by Avithera at 12:52 No comments: